A Skyscraper Made of Stacked Farmhouses, Lifted by Crane Into the Structure

Basket elevators inside can move vertically and laterally

Here's a fascinating proposed solution to the displaced Hmong population in China, whose farming communities are being displaced by modern planning. Xiangshu Kong, Xiaoyong Zhang and Mingsong Sun envision tall, skeletal structures built in the countryside, with farmhouses lifted into them by crane. 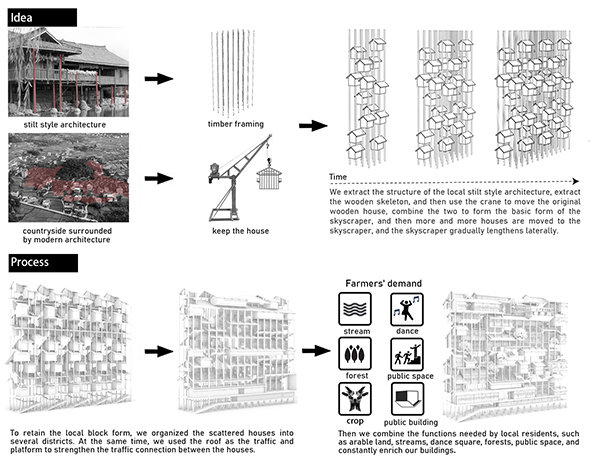 Mobility between units, both vertically and laterally, would be accomplished by a system of cable-car-like, human-sized birdcages that dovetail with traditional Hmong production techniques (see bottom illustration). 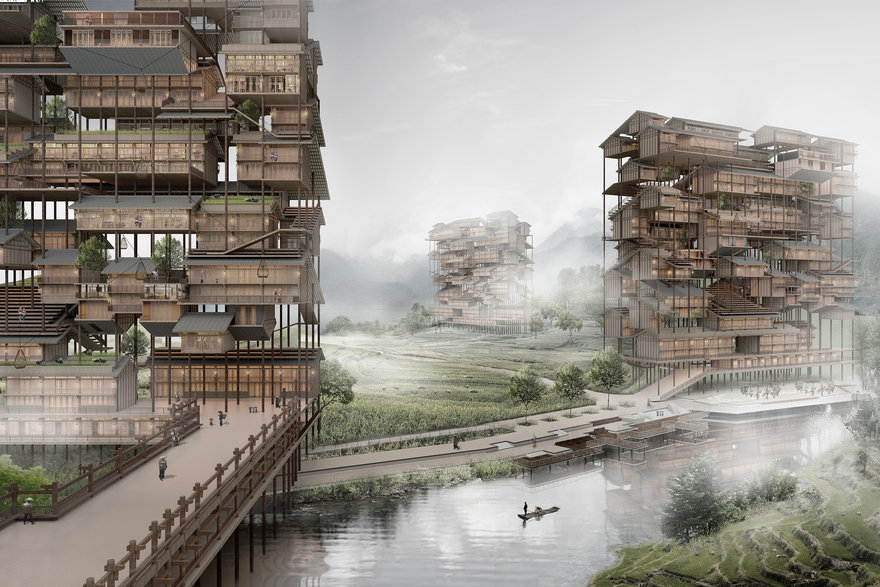 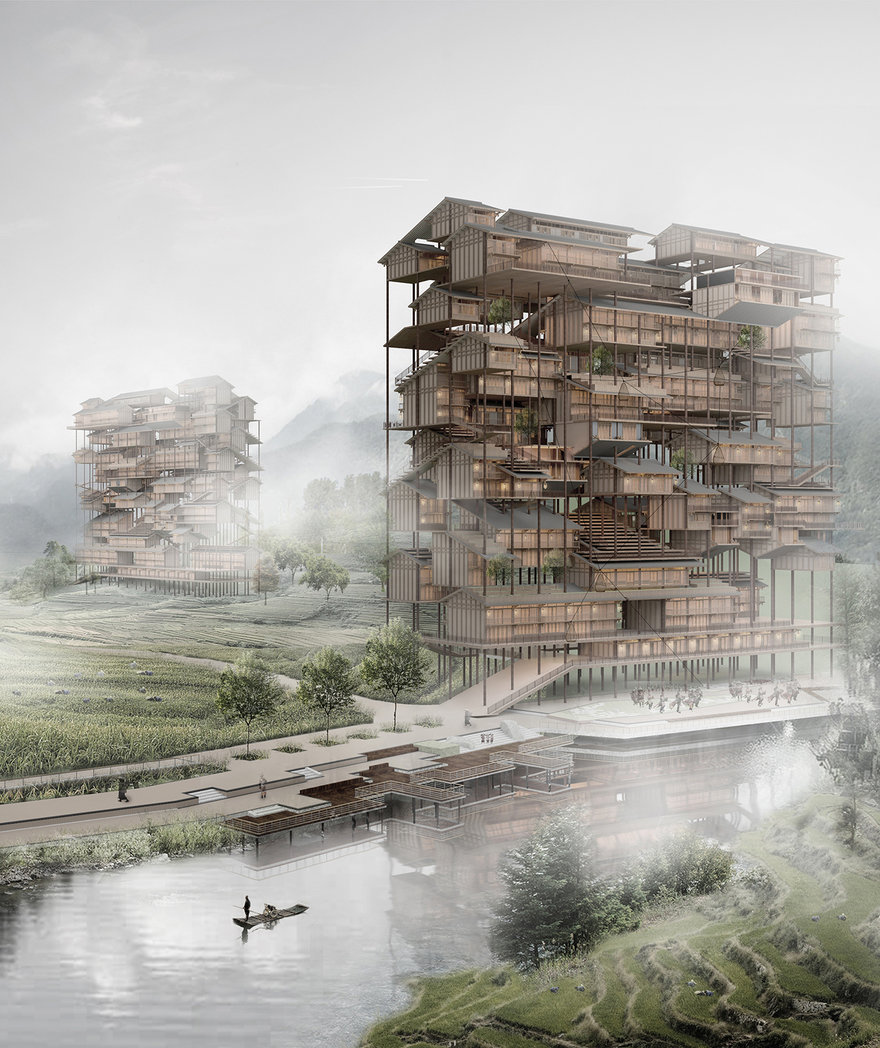 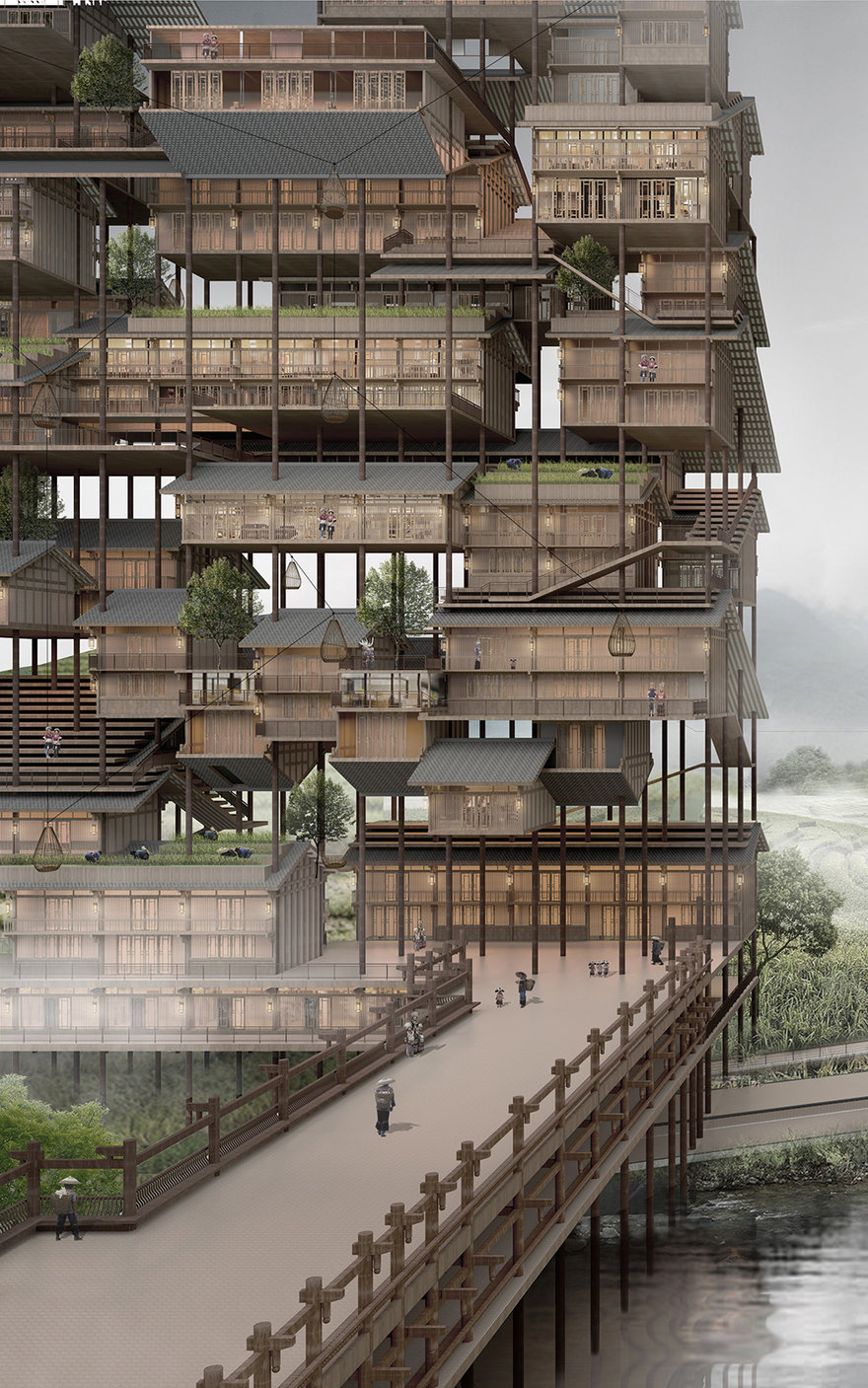 "Hmong in China is an ancient nationality, mainly living in Yunnan province. Hmong has its own language, architecture, and lifestyle. However, this group of special minority cultures is being gradually swallowed by modern culture. Many Hmong cultural customs have disappeared, and even many Hmong people's houses have been demolished or will be. 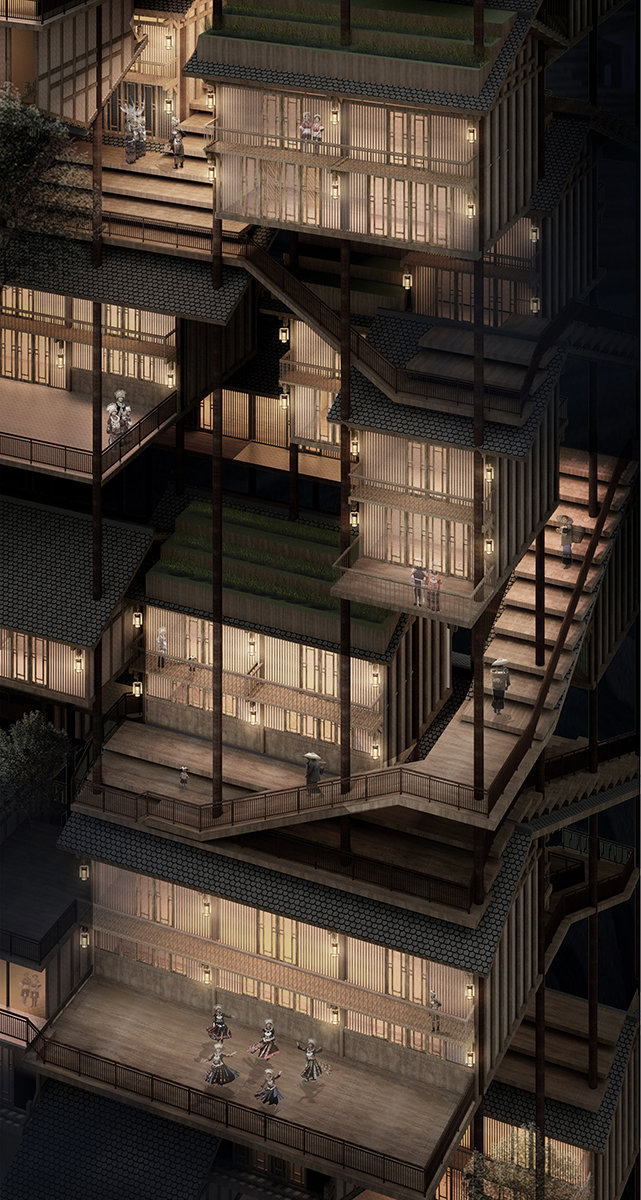 "In order to build a well-off society in an all-around way, the Chinese government has issued relocation policies to the villages to help the Hmong stay away from their dilapidated places of residence and move to the suburbs of cities to provide a modern and affluent life. Although the original intention of the government is good, more and more ethnic minorities are unable to adapt to the new places of residence. They miss their arable land, yards, streams, and so on. We try to design a skyscraper. We try our best to keep farmers' memory and lifestyle of their original hometown, and at the same time let them enjoy the convenience of modern urbanization. 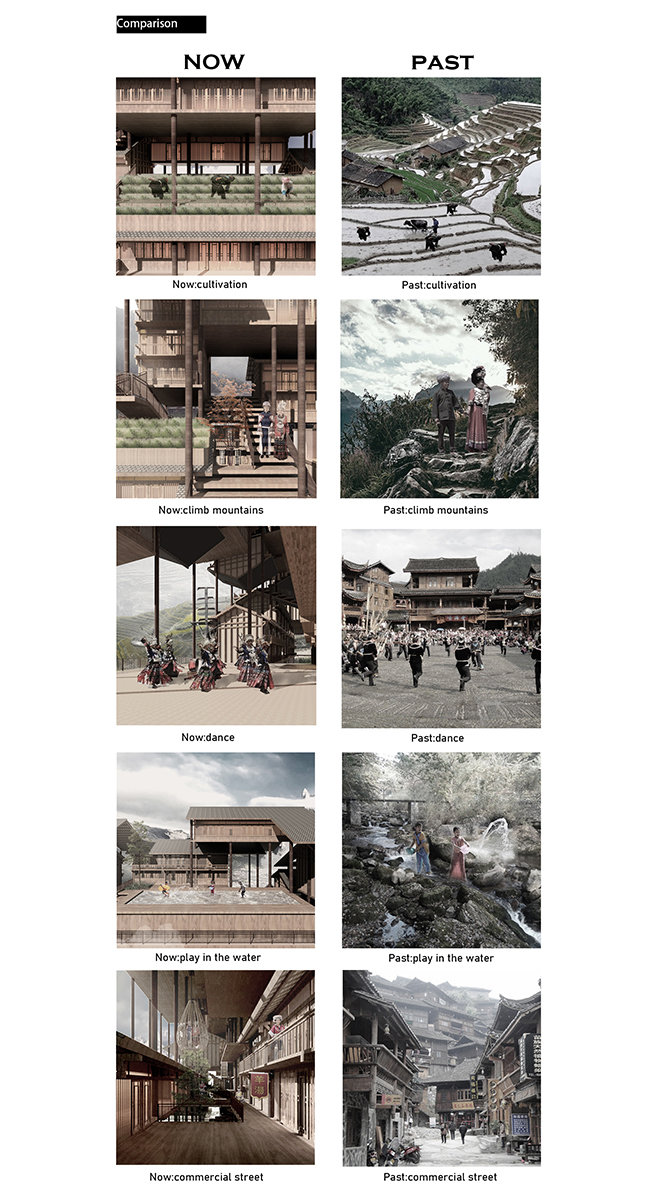 "We extract the structure of the local stilt style building, extract the wooden skeleton, and then use the crane to move the original wooden house, combine the two to form the basic form of the skyscraper, and then more and more houses are moved to the skyscraper, and the skyscraper gradually lengthens laterally. To retain the local block form, we organized the scattered houses into several districts. At the same time, we used the roof as the traffic and platform to strengthen the traffic connection between the houses. Then we combine the functions needed by local residents, such as arable land, streams, dance square, forest, public spaces, etc. And constantly enrich our architectural space to preserve the lifestyle of the Hmong family. 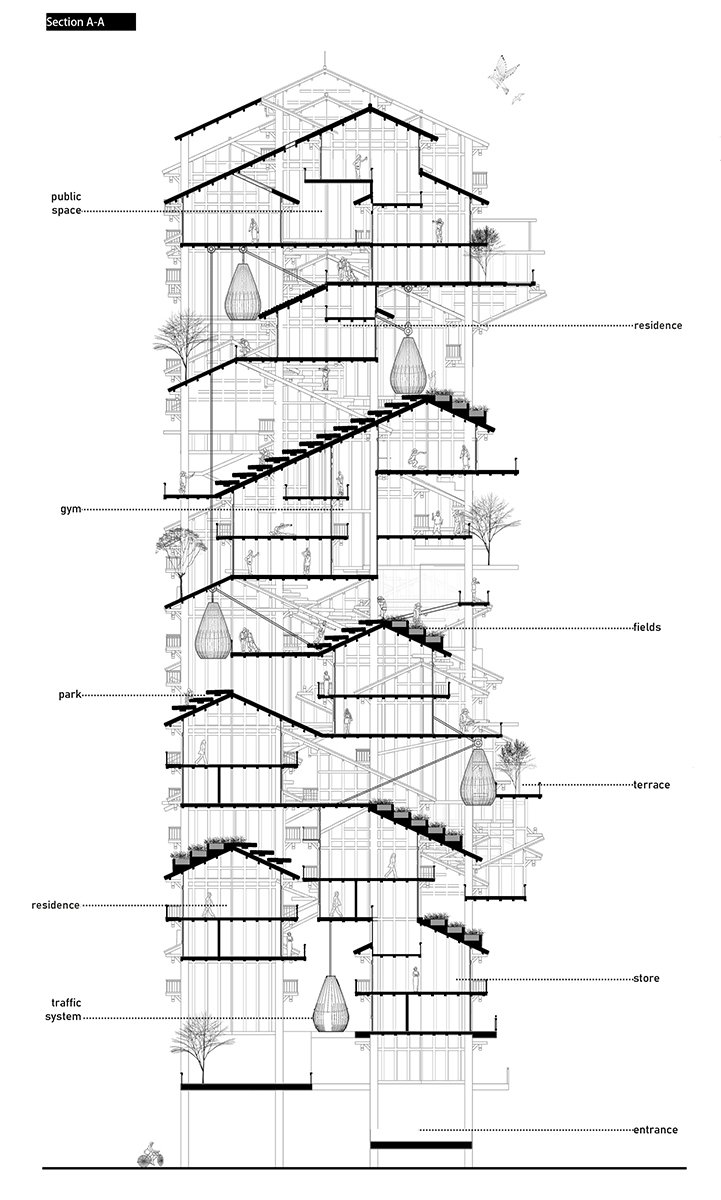 "In the past, villages were far away from each other on different mountains. Hmong people hung cable cars on ropes to pass goods. At the same time, the Hmong people are good at making birdcages. We extract the form of birdcages, translate them into transfer boxes, and then use ropes to transfer boxes to meet the needs of traffic." 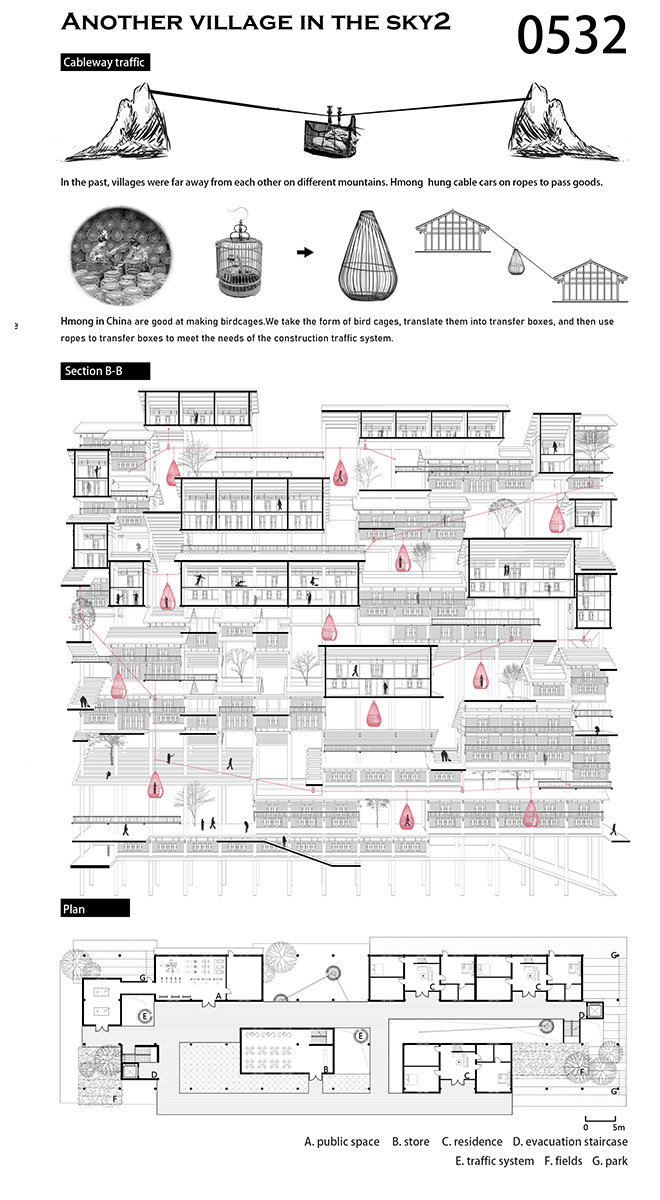 The project won Third Place in the Evolo 2021 Skyscraper Competition.

A Skyscraper Made of Stacked Farmhouses, Lifted by Crane Into the Structure