Core77 Toyota Calty Studio Visit, Round 1: How the pros use PS

So, we're back from Toyota's Calty Design Research studio in palm tree-infested Newport Beach, CA, and it was about as thoroughly pleasant a press visit as could be imagined. A small group of design bloggers got a walk-through of the studio, presentations by three different designers working on the 2009 Venza (a new Boomer-seeking "crossover sedan" that Calty's been developing since 2005), and some nice touches like a hands-on clay sculpting demo and a visit to the room-sized 5-axis CNC.

More coverage to come, but let's start off with a short video of Venza chief exterior designer Ian Cartabiano doing a PS render of a concept sketch, followed by some 3D CAD fly-throughs:

A couple of things to notice about Ian's technique and set-up. First off, despite having access to pretty much any interface technology out there, he's going for what looks like a 12x12 Wacom Intuos--not a Cintiq--and rendering over a scanned pen and paper sketch. According to Cartabiano, who also teaches auto rendering at ArtCenter, there's a lot of variation among designers; while Photoshop is pretty standard, input devices are a matter of personal preference. Ian prefers the Intuos' responsiveness, and reiterates what a lot of other top designers have said about sketching: there's no substitute for the tactile feedback of paper.

Also of note: custom pen shapes for different applications, a stylus that never stops moving, and lots and lots of layers.

For a different angle on this demo--literally--check out Jean Aw's coverage on NotCot. She managed to stick around all the way until Ian signs his name.

The 3D CAD is from a large presentation room where more developed designs are reviewed by management. The Alias models (yep, it's all still Alias, though according to Calty president Kevin Hunter, the engineers re-build in CATIA prior to tooling) are projected eight feet high and spun around in real time, inducing a tiny bit of vertigo and enabling an unnerving level of scrutiny ("yeah, can we zoom in on the lip of that cup holder? Thanks...")

After the jump: photos of a clay studio, material and color boards from the 50s, and the fastest Wacom hands we've ever seen in our sheltered little lives.In the entry hall at Calty there's a visual history of automotive color and material; here's what the late 50's look like: 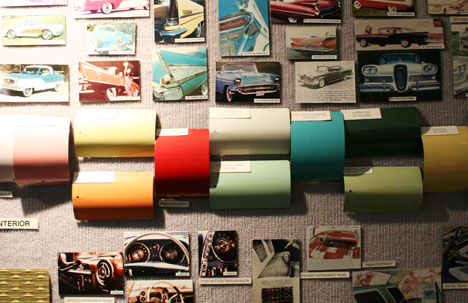 In the clay sculpting studio. All the tools are hand made, and it takes four to five years to train an automotive sculptor: 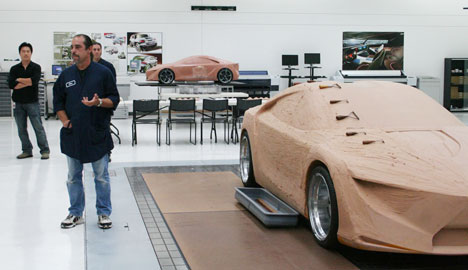 Last but not least, Creative Designer Edward Lee does a quick interior rendering demo, and we do mean quick. Video's got some jitter, but watch how fast his hands move across the tablet and keyboard. We swear he is human though; got up and said hi and everything:

Core77 Toyota Calty Studio Visit, Round 1: How the pros use PS