Years ago I learned two things about working at a Japanese corporation that Americans would find weird:

1. Upon being hired, it's not unusual to start by being sent to a live-in corporate training facility for a year or more, where you'd live in a company dormitory.

2. After completing training and starting work, it's not unusual that you'd be placed in a position completely different from your degree. For instance, if you were hired by a chemicals company as a chemical engineer, you might start off unloading trucks in the loading bay. You'd then be rotated through several departments (Marketing, Sales, Logistics, etc.) and eventually placed in one based on "fit;" in other words, you might wind up in the Accounting department, rather than Engineering!

This entry only has to do with #1 above (I included #2 because it still blows me away). Osaka-based Takenaka Corporation, one of Japan's major general contracting firms, employs over 7,000 architects, construction managers and engineers. Regardless of which degree they hold, all start off by spending a year in Kobe at Takenaka's live-in training facility, where corporate culture is inculcated. 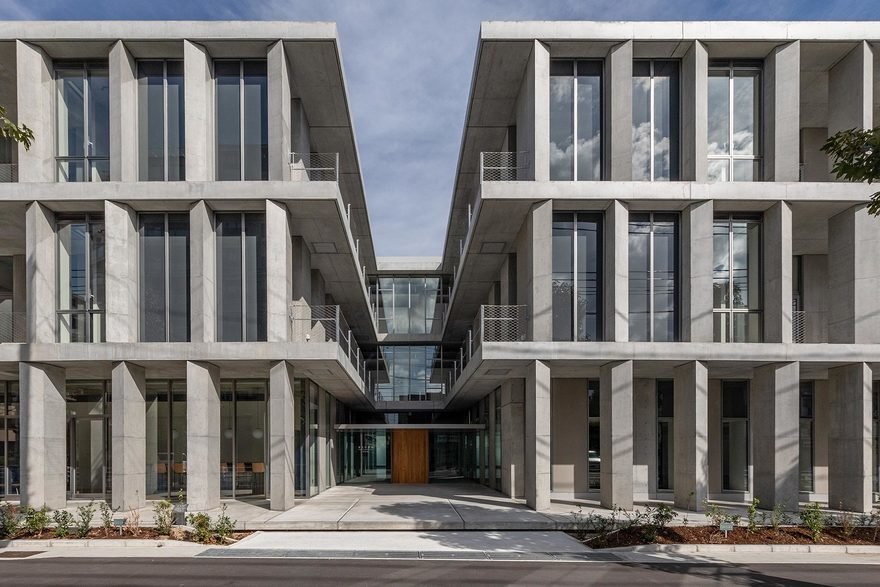 In 2019 Takenaka redesigned their training-employee dormitory. While Takenaka architects themselves handled the architectural details, design consultancy Taiji Fujimori Atelier was hired to design the furniture for the common areas and the dorm rooms themselves.

This being Japan, where people are as comfortable sitting on the floor as at chair-height, the common areas feature a mixture: 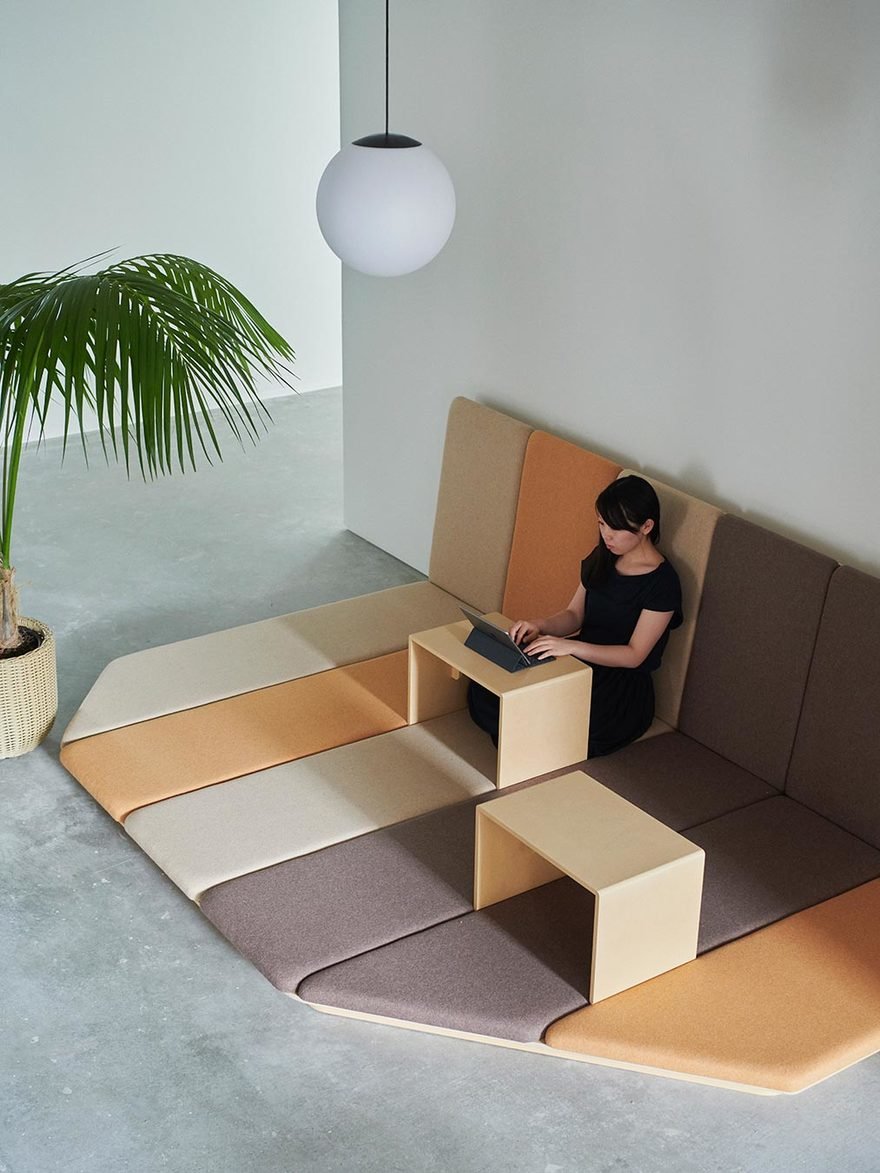 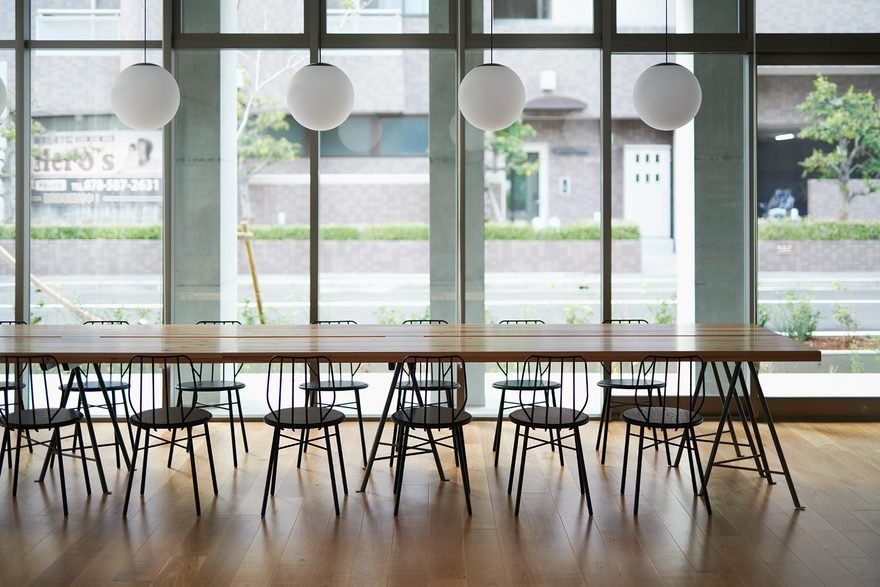 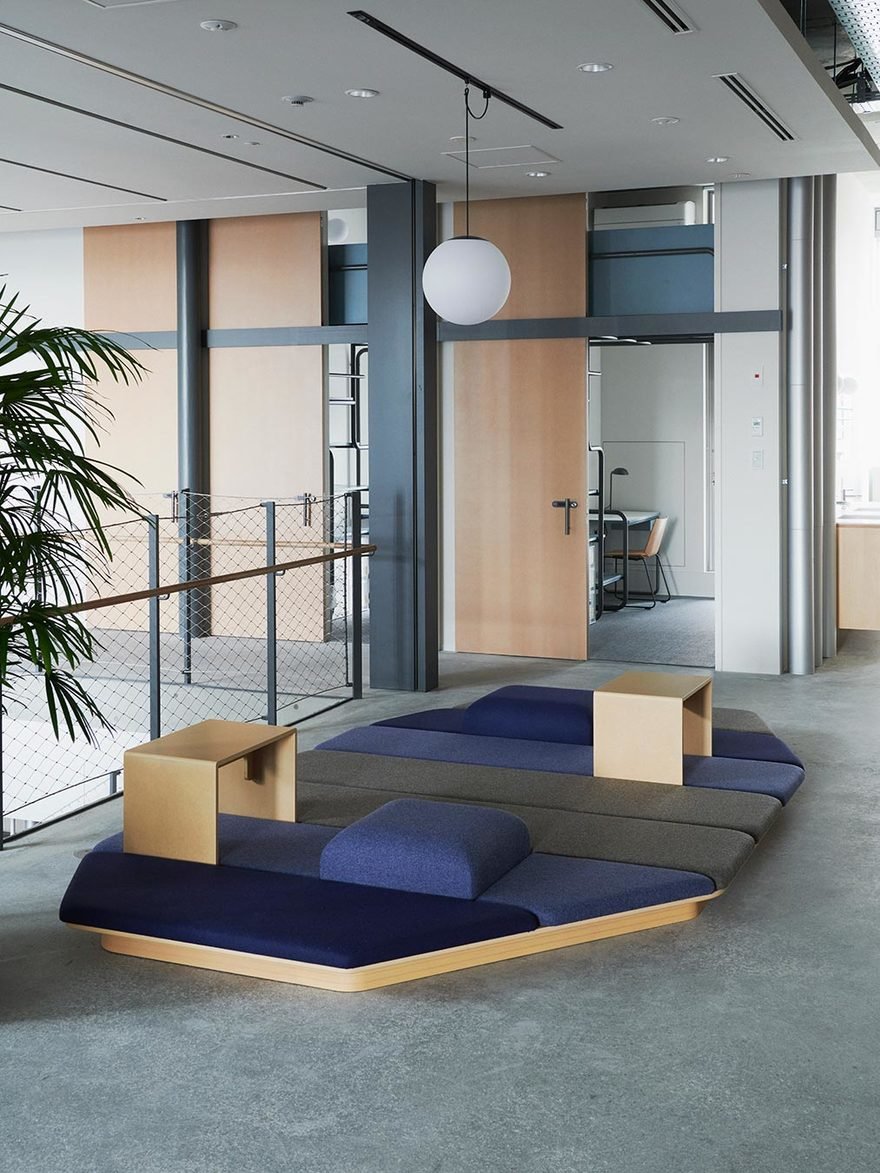 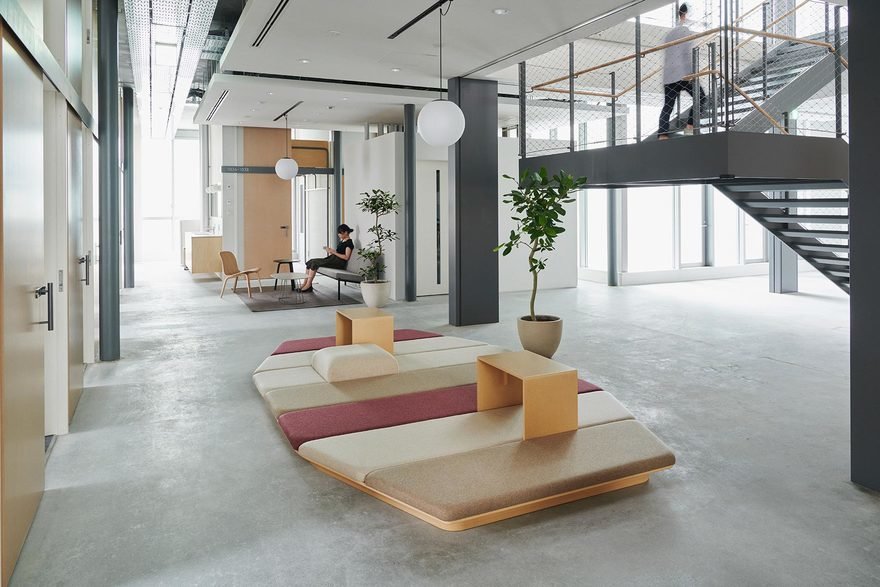 Where it really gets interesting, though, is the dorm rooms themselves. First off, you can tell by the doorknobs that the doors are not typical: 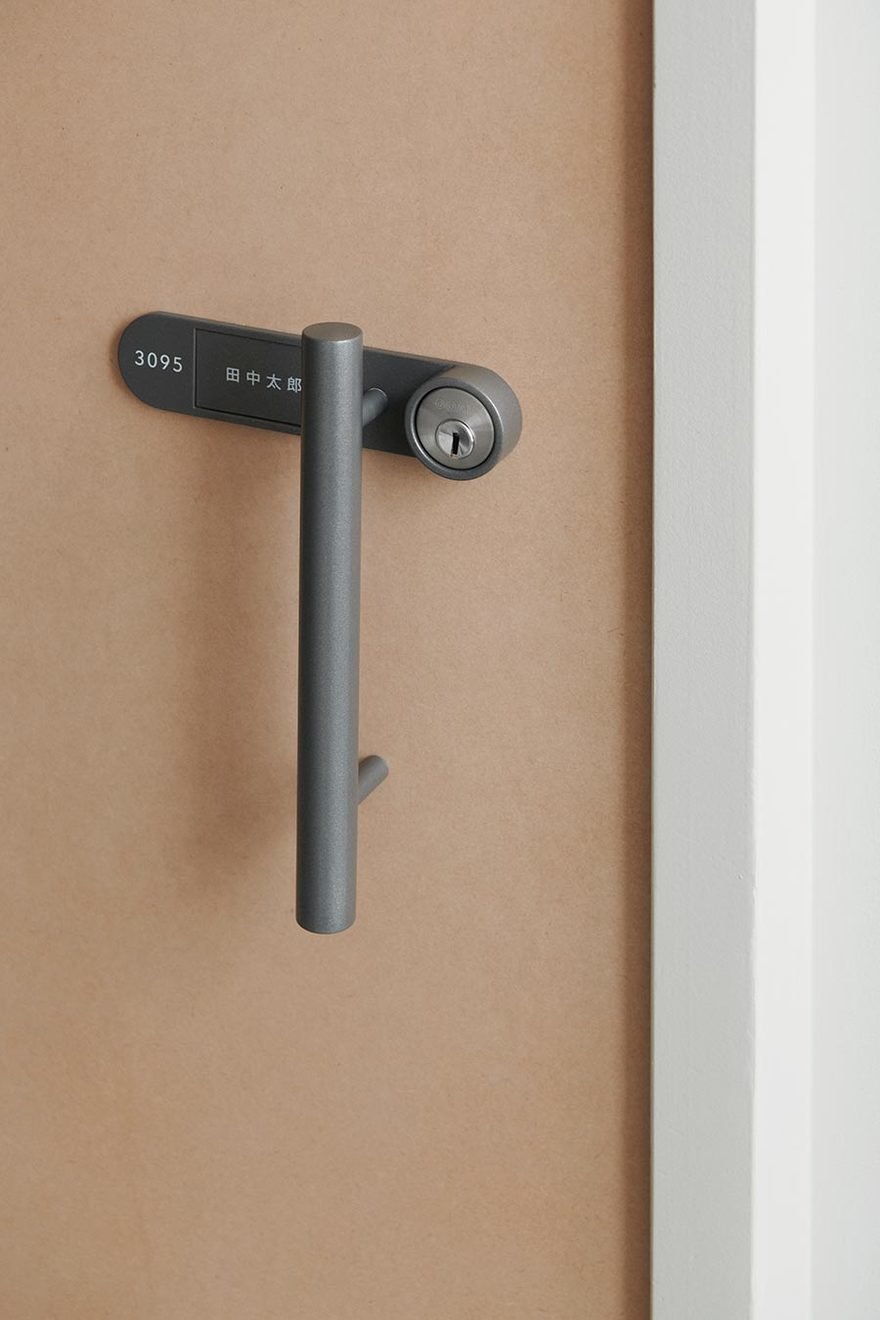 Obviously that's not a knob at all. The doors slide, rather than swing: 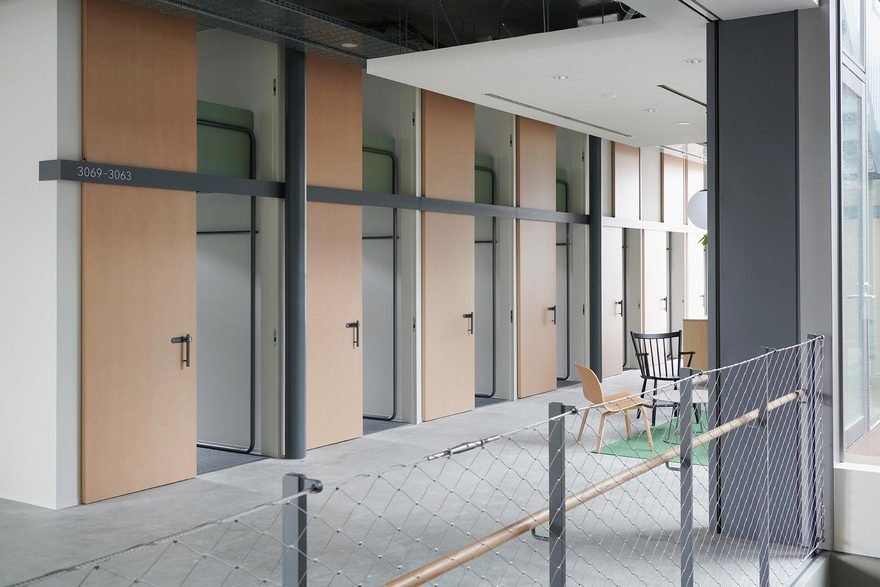 This allows you to slide that upper door open to see what's going on in the hallway, or get some fresh air, from the loft bed inside each room. 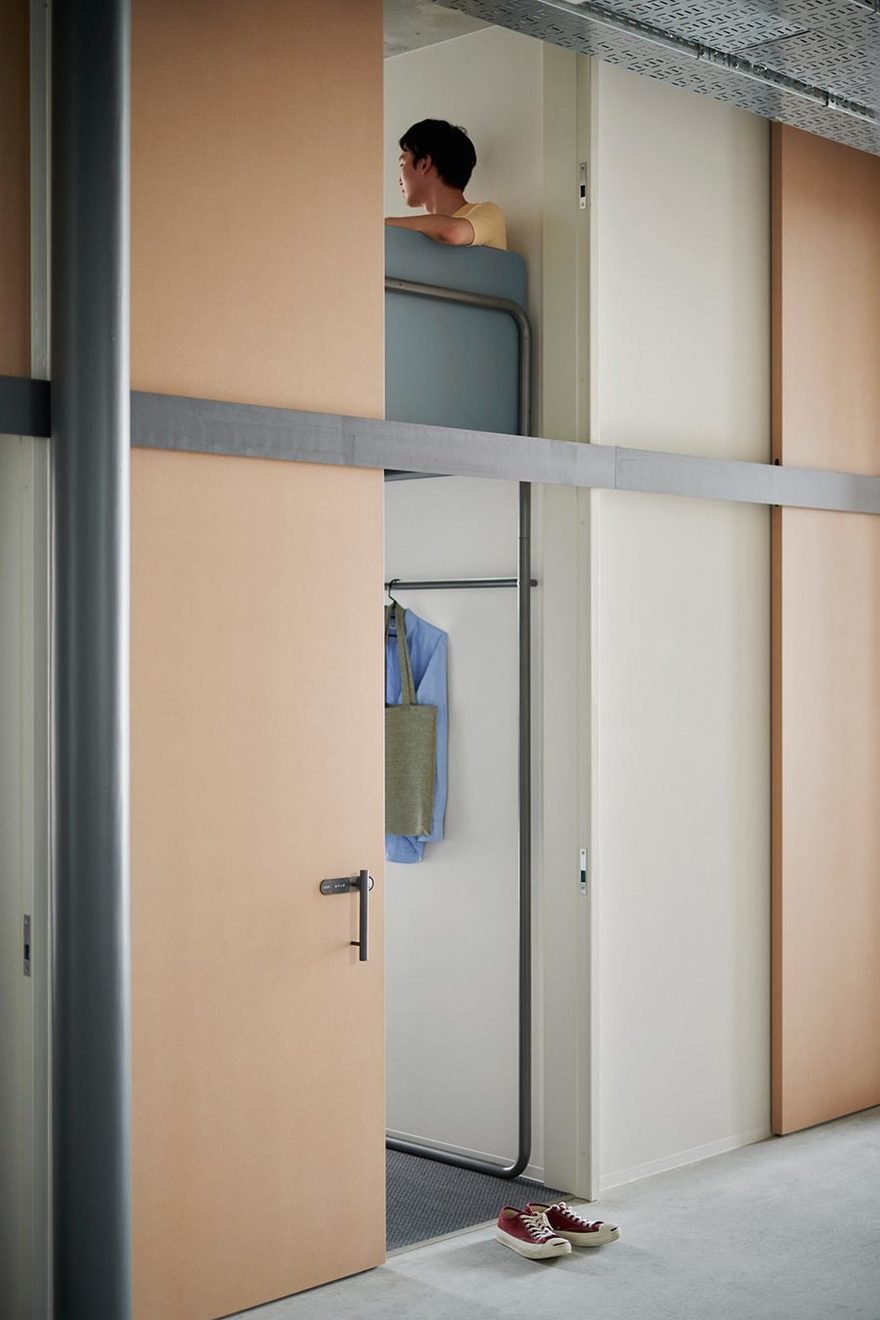 The "furniture" within each room is super minimal: 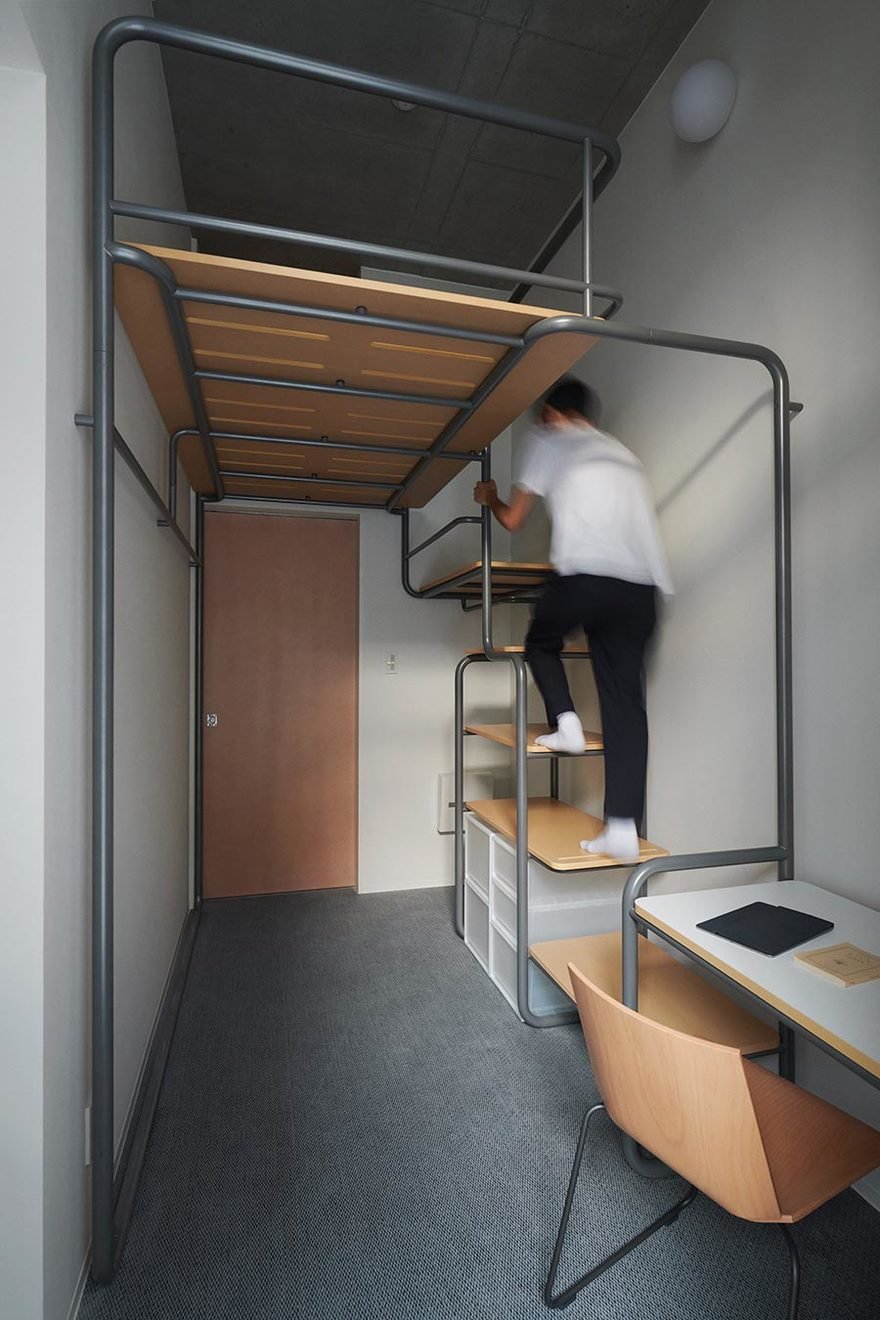 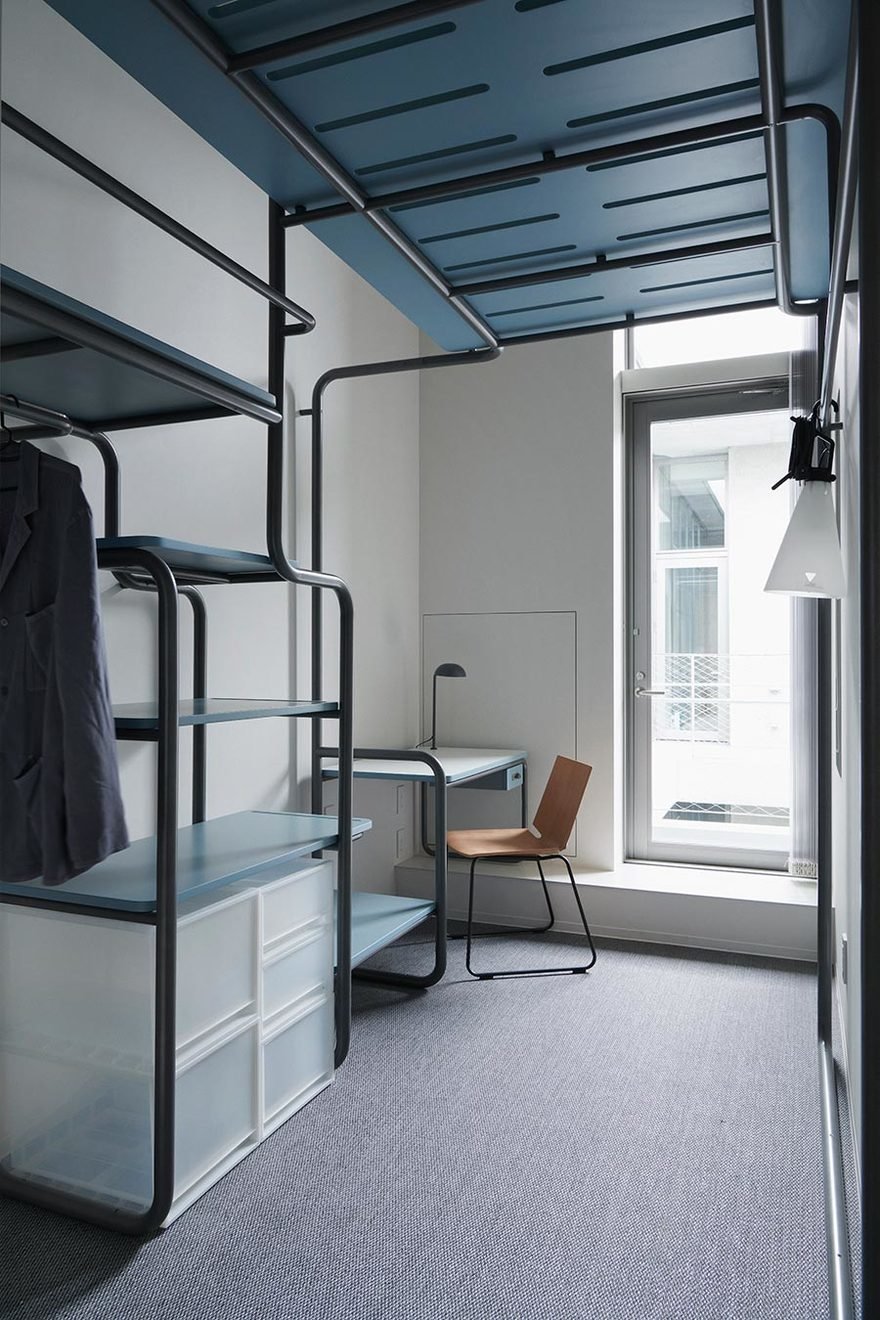 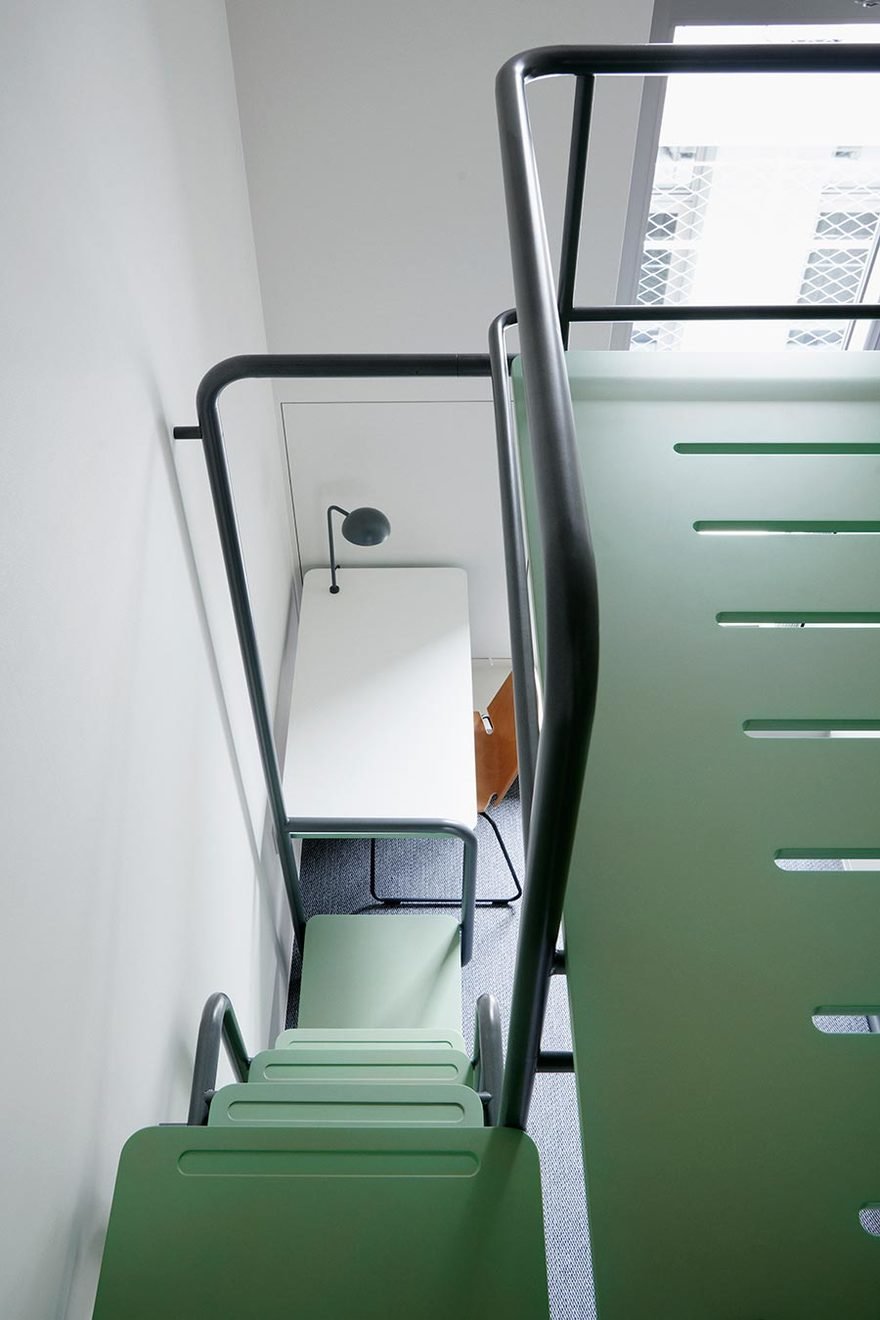 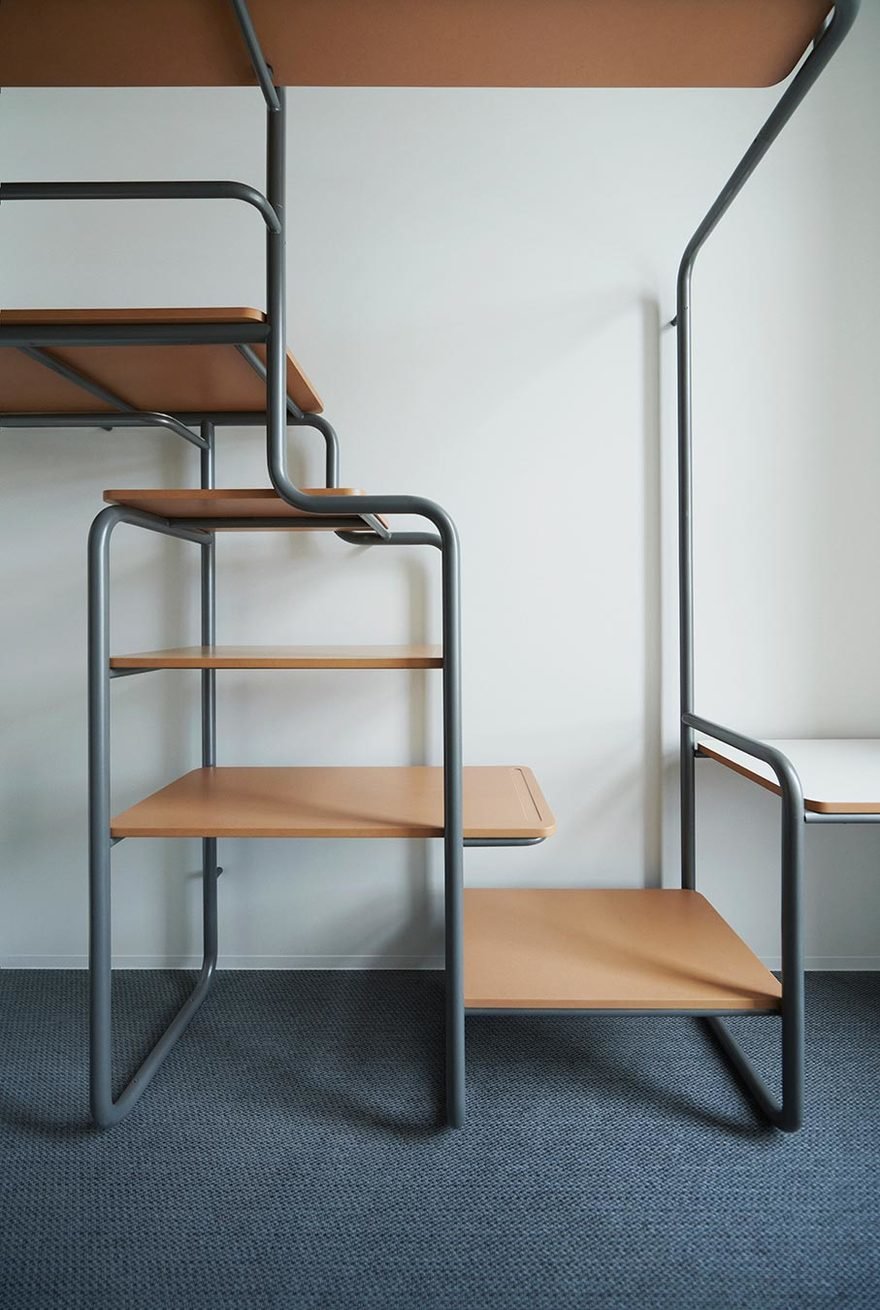 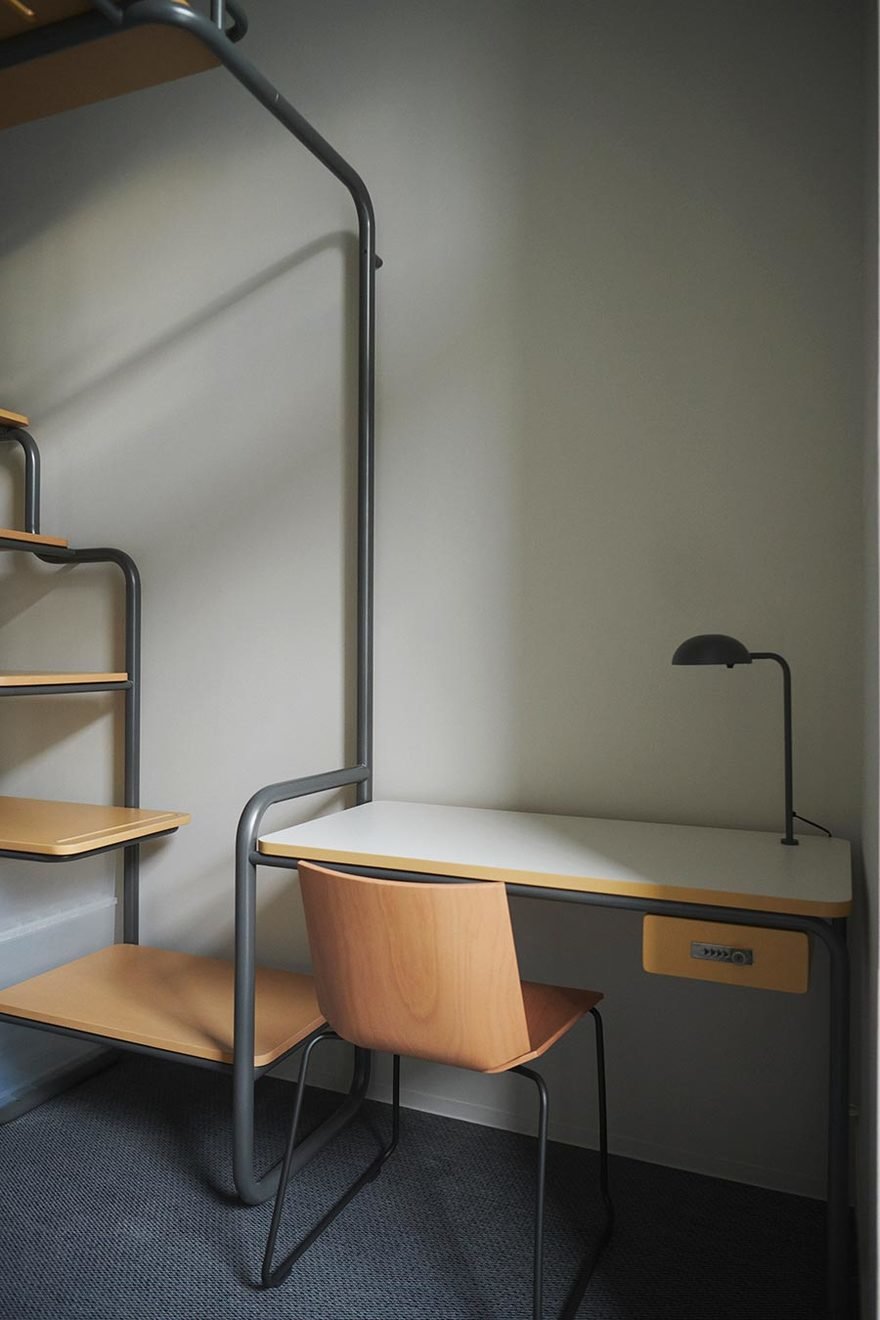 As Taiji Fujimori Atelier describes it:

"The furniture in the dormitory room is 'room-like furniture,' which is a combination of shelves, closet, bed and desk. This unit is made simply of steel pipes that look like a one-stroke line and horizontal MDF boards, and the shelf boards can function as the staircase to go up to the bed. While making a small room practical and functional, the unit still keeps the appearance as one piece of furniture." 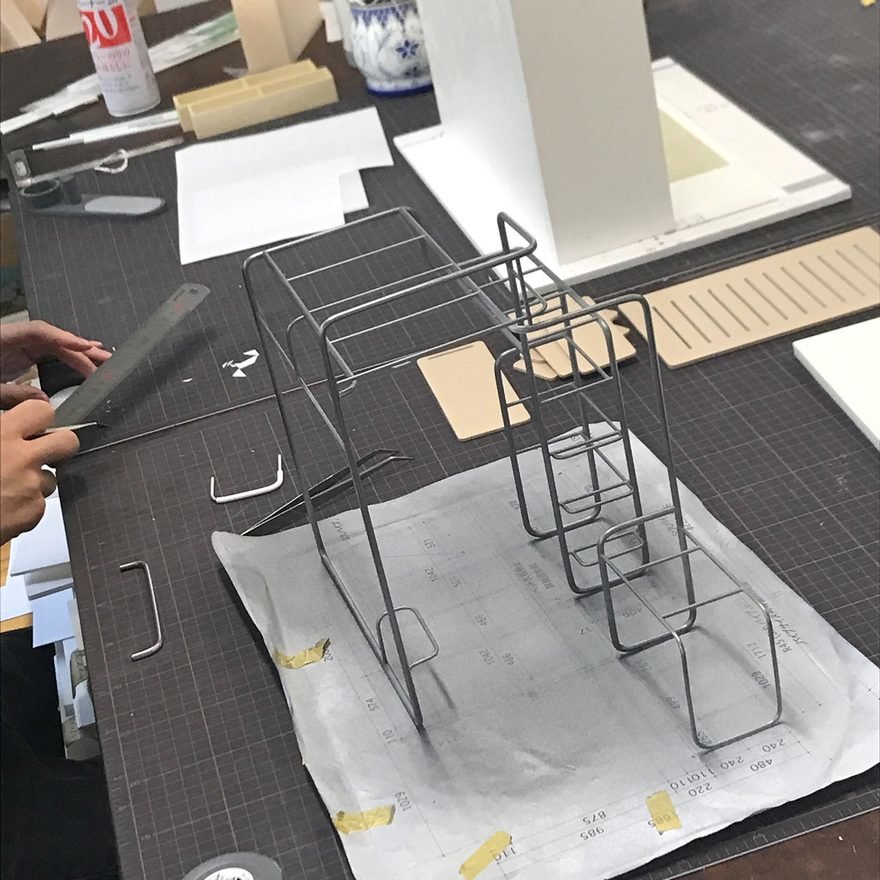