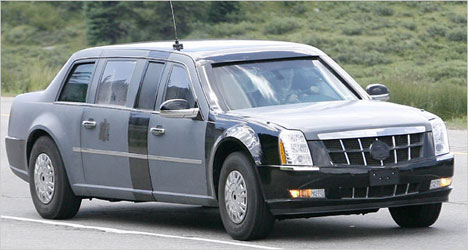 [above photo of a disguised prototype by Chris Doane]

While the next U.S. President won't take office until January, his car (and several lookalike decoys) is reportedly having the finishing touches put on it by GM's Cadillac.

Automotive journalist Gregg Merksamer, author of Professional Cars: Ambulances, Hearses and Flower Cars (and a former Pratt ID department classmate of Core77 staff), has "spent almost 30 years paying close attention to presidential vehicles as part of my interest in what are called professional cars, which also include hearses and ambulances." Merksamer is the kind of guy who can tell, just by seeing television clips of Bush getting in and out of the Presidential Limo, that the windows are roughly five inches thick, almost double that of previous Prez Limos.

In an article for the Times, Merksamer writes up the next First Car. Since the Secret Service is unsurprisingly uninterested in revealing details, Merksamer analyzes spy photos by pro auto spy photographer Chris Doane and, through his research, uncovers some interesting historical facts.

For example, how do you retire or scrap an ex-Presidential Limo? You can't exactly sell it on eBay; for security reasons, it has to be destroyed completely. Clinton's '93 Cadillac Fleetwood, on display at the Presidential Library in Little Rock, was sealed shut and donated without the keys. These are just about the only cars in America that foreign competitors won't be able to reverse-engineer.