The tech works great. The UX design will make the difference

When it comes to crashes, cars have grown ever safer—provided you're inside the vehicle. In the event of a collision, passengers are swaddled in a comprehensive cocoon of airbags that would've been impossible to imagine 30 years ago.

However, things have grown no safer for those outside the car. A cyclist struck by a car in 2022 has pretty much the same experience as a cyclist struck by a car in 1922. Modern helmets can only do so much, and each year in America nearly 1,000 cyclists die in crashes, and a further 130,000 are injured, according to the CDC. (Not all of those are the result of being struck by a car, but the vast majority are; of 1,260 cyclists killed in 2020, 806 died in motor vehicle crashes, according to the National Safety Council.)

Because bicycle manufacturers cannot add anti-car airbags, it would be nice if auto manufacturers stepped up with some solutions of their own. Thankfully Audi is doing just that. The company has been researching the dismal car-vs.-bicycle fatality rates, and learned that the number one reason provided by drivers involved in hitting a bicycle was "I didn't see the cyclist."

Audi's proposed solution is a technology called C-V2X. That's the name of a non-proprietary technology, and a somewhat clumsy acronym for "Cellular Vehicle-to-Everything." It consists of a chipset that can recognize, and talk to, any other nearby C-V2X chipset. And despite the name of the technology, it doesn't actually operate by pinging off of cellular towers, which would introduce too much latency to be of any use in a split-second crash window; instead the devices communicate directly with each other, via radio waves, on a dedicated and available spectrum.

So how does this technology protect cyclists? Audi's thinking is that a C-V2X chipset would be installed in every car. (Not just every Audi, every car. They're working on this the way Volvo worked on seatbelts 60 years ago, designing for the greater good.) Bicycle manufacturers, or bicycle accessory manufacturers, would begin selling bikes and accessories—like a taillight, for instance—that also had a C-V2X chipset in it. Now you've got instantaneous vehicle-to-bike, bike-to-vehicle communication.

Because the chips can "talk" to each other without requiring line-of-sight, Audi's thinking is that this will help reduce those "I didn't see the cyclist" accidents. To illustrate this, Audi invited Core77 and a handful of journalists that cover bikes to participate in a demonstration on a closed course.

Audi laid out five scenarios in which it is difficult or impossible for a driver to see a cyclist. Here's how they envision the C-V2X technology alerting the driver, in order to potentially avoid a crash.

You're about to overtake a cyclist riding on the shoulder or a bike lane. Either you're not paying attention, or the cyclist is wearing an invisibility cloak.

You're about to make a right turn, and cannot see that there's a cyclist in your right-side blind spot, traveling at a speed that will intersect with your car as you turn.

You're coming up to an intersection and due to visual obstructions, cannot see that there's a cyclist traveling perpendicular to you.

You're about to pull out of a parallel parking space, unaware that a cyclist is traveling alongside the row of parked cars and headed your way.

You and a car traveling towards you are both about to make a left turn. Because of the angle, you cannot see that there is a cyclist traveling behind the opposing car, who is about to head straight into the intersection as you're making the turn.

Of all five of the demos, which we experienced from inside the car, the Left Turn Assist was the most surprising and compelling. In that opposing-car, mutual-left-turn situation, you really cannot see the cyclist; Audi's stunt cyclist seemingly hurtled out of nowhere, directly into the path we would have turned into. If we hadn't heard the C-V2X chime, we wouldn't have known what was coming.

After the demo, the Audi execs asked us what we thought. I was impressed by the tech, and told them that it seems to me they've worked it out well. But what remains is a design problem that must be carefully considered by the UI/UX designers. Let's take a look at these early demonstration graphics for each scenario: 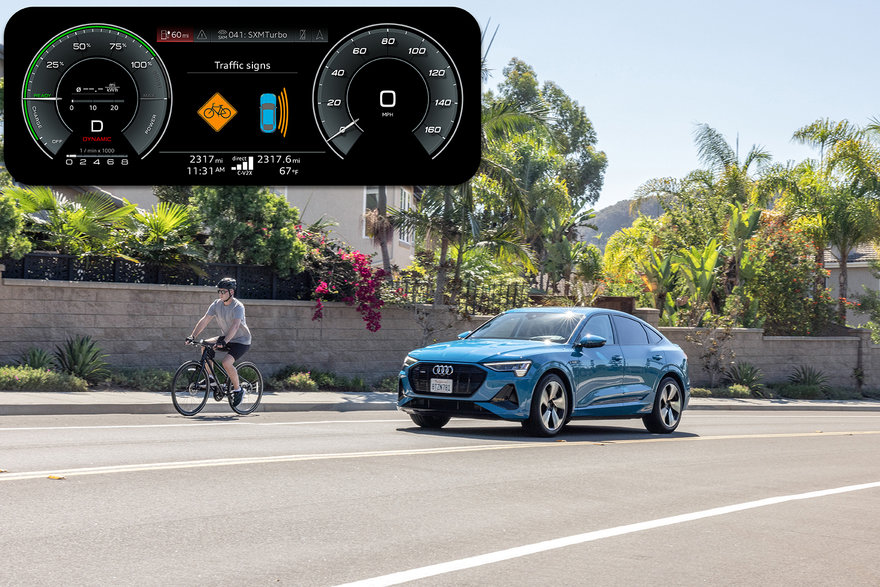 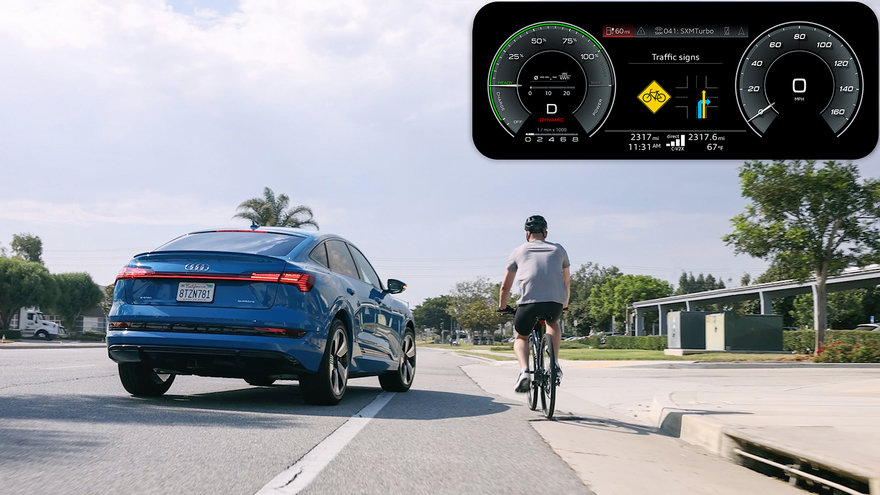 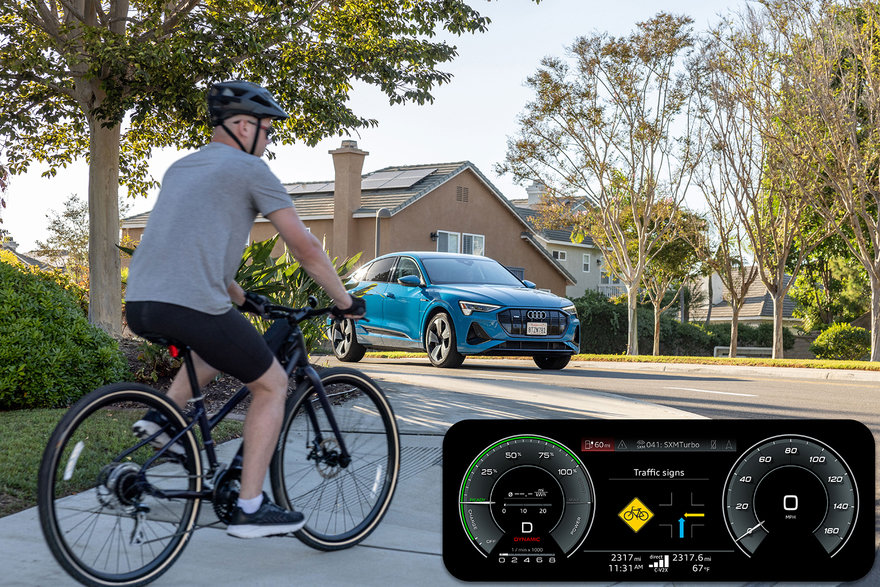 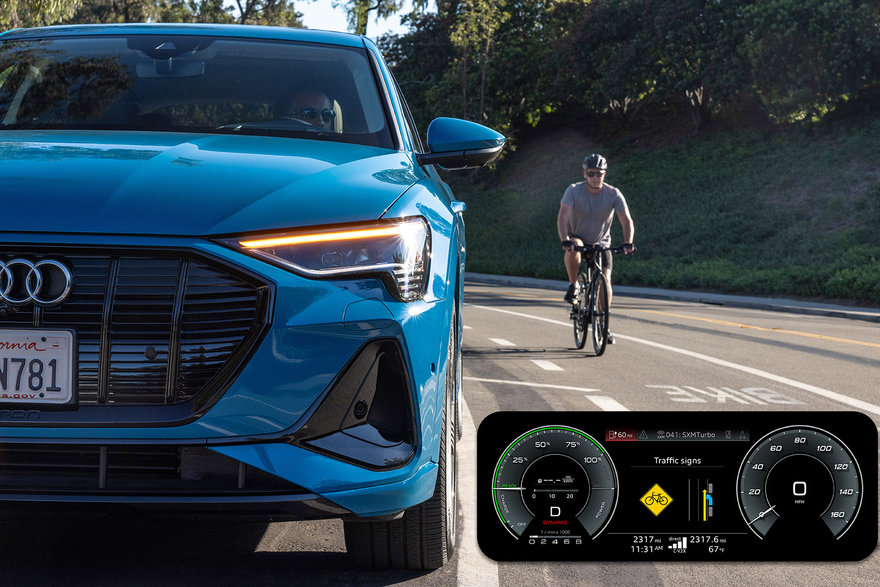 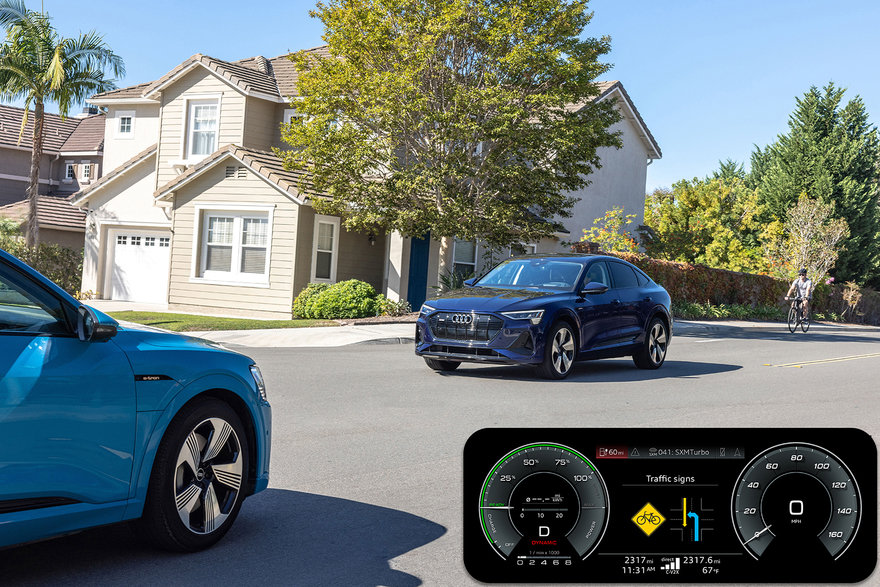 The graphics make sense to me here, sitting at my computer, staring at them on a large screen. During the demo in the actual car, a chime sounds and the graphics pop up at the scale you see in the photos, on the dashboard. Because I was not familiar with these graphics, it took me a moment to register what they meant and where the potential danger was. It took too long for me to process, this being my first time experiencing them. Perhaps that issue would go away with training or familiarity.

The other issue is that they are displayed down on the dashboard. I really think these need to be projected in a HUD, so I can keep my eyes on the road. For their part, Audi says these are early days—proof-of-concept—and that they indeed may wind up in a HUD.

The challenge for the UX designers will be to make each alert instantaneously comprehensible. I think some combination of visual and haptic might work too: For instance, if the seat bottom vibrated in the direction of the incoming cyclist.

That being said, C-V2X technology will certainly make its way into cars. Audi has stated that the technology is not proprietary, and that other automakers are using it to work out their own solutions. And, interestingly, the Chinese government is aware of the technology, convinced of its safety applications—and has mandated that all new cars in China will have C-V2X chipsets installed. It will be a matter of time before American lawmakers come around.