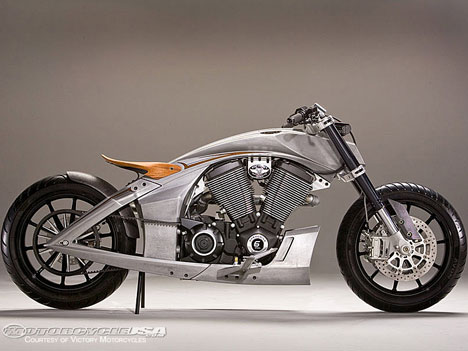 We've gotta show you Victory Motorcycle's CORE concept bike, unveiled at last week's Cycle World International Motorcycle Show in New York. And no, they didn't name the bike after us; so where'd the moniker come from?

According to the Victory press release, the "design team felt the name CORE perfectly reflects the essence of this concept motorcycle. It is, in fact, the raw 'core' or center of a motorcycle. There is no traditional bodywork; the motorcycle is effectively turned inside-out with its architecture completely exposed. It also accentuates the innovative frame design and the process that is used to make the cast aluminum frame: the molten aluminum is poured into a sand core, which is removed when the casting process is complete."

Note to Core77 higher-ups: Any way we can help Victory push these into production, then purchase a few as staff vehicles for the office? I mean I know we're in an economic downturn, but we have an image to uphold, no? I just really think it would strengthen our brand, that's all.