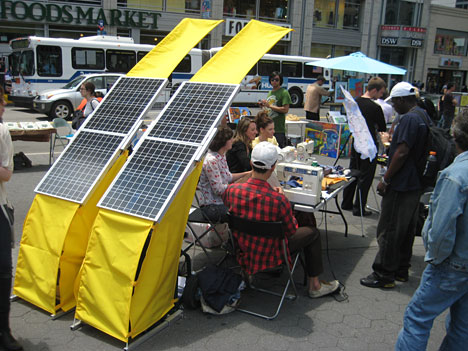 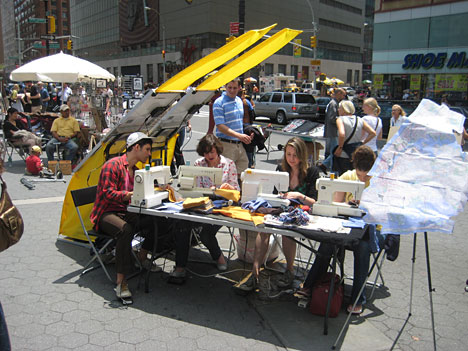 "How tightly can a product's lifecycle be compressed... and what are the ramifications of doing this?"

These are the questions Elliott Montgomery asks with his MicroCycle project--a mini manufacturing station-turned-public outreach kiosk that recently appeared on the south end of Union Square in New York City. Here, he and his posse created fabric shopping bags (made from salvaged materials, natch) but doesn't sell them. Instead, you can buy one by providing "an idea" for localized manufacture, materials sourcing, or the like. He designed and built the solar units for Solar1's outreach project I Heart PV.

@Jennifer van der Meer's a fan: "What's so fun about Elliott's installations is that he gets people to think in the immediate, about the waste streams available in their neighborhood, today, that can be recommissioned into something useful. He also thinks in terms of future reuse, plotting identified waste streams on a map, and posted online as an open source database.

Learn more about this project and Elliott's other work at epmid.com. Bonus for Core77 readers: Elliott's the creator of Aperture, entered in the 2008 Greener Gadgets Design Competition!