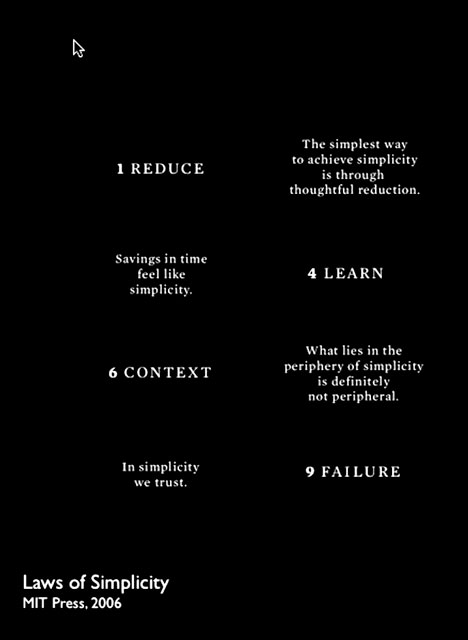 Forgoing his own lunch break, John Maeda just took a short hour to serve up a tasty webinar for the IDSA's Designer Spotlight Series. Addressing the challenge of "Open Source Administration", Maeda expounded on his philosophies of humanizing technology through social medias, specifically focusing on his own efforts to create more communal and creative networks in his present role as president of RSID. If you could get past the microphone echo, Maeda's talk, as usual, was perfectly simple, refreshing and human. Reminding us that "electrons move at the speed of light, [people] don't", he touched on his implementation of internal blogs and digital message boards for the RSID community, the importance of finding "authenticity" within large organizations, and the realization that he had evolved from a "CEO" to a "moderator" at RSID. The whole thing rang true with evidence-of-community-makes-humans-happy speak and we're thrilled to see someone finally bringing design schools into the 21st century. The tab for digging into this Spotlight hour can be a bit steep ($70-$85), but it sure beats listening to waitresses complain about their kids. Check out the full listing here.

And yes, we did do a screen shot of JM's presentation from a tiny laptop so it's a bit rough around the edges. And yes, that is Maeda's very own LIVE mouse arrow in the top left corner.