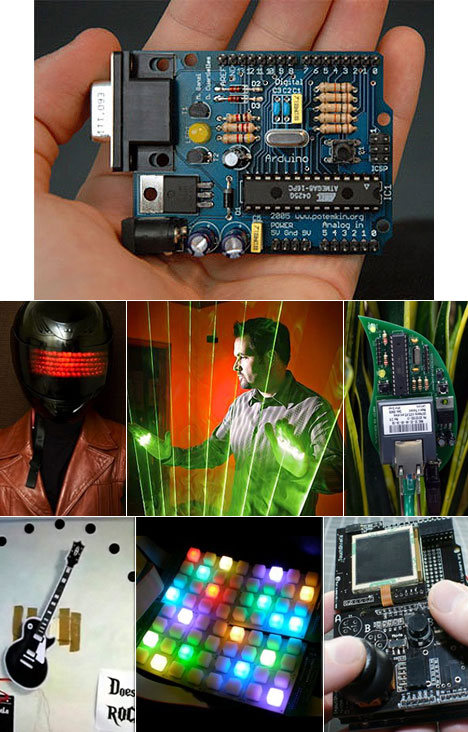 On their website, UK industrial design firm Tinker. it! promotes the arduino, a credit-card-sized circuit board laden with sockets and sold by Tinker Tools. What does this little thing do? Well, that depends on you, really--the arduino is aimed at the physical hacker/tinkerer set.

[The arduino] comes with a series of sockets into which tinkerers can plug light or motion sensors and a similar set for plugging whatever gadget they want to control into. Using a laptop, the arduino can be told what to do when a particular event happens - for example, when a motion sensor is triggered, it powers up a motor.

Look at any recent electronic art installation and the chances are that behind the scenes there's an arduino. In fact, [Tinker. it! co-founder Alexandra] Deschamps-Sonsino believes more than 100,000 arduino boards have now been sold around the world, although it is difficult to give an exact figure - in keeping with the open ethos of the movement, plans are available that allow people to make their own.

"People are realising something like the arduino can be used to give new life to old toys. It's electronics DIY, and people are now grasping that even things like mobile phones can be hacked relatively easily."

The above quotes are from the London Evening Standard's explanation of the arduino phenomenon. But to get an idea of what it's actually possible to build using one, check out hacknmod's "Top 40 Arduino Projects of the Web," which features projects ranging from laser harps and guitar pedals to head-tracking devices and self-balancing robots.