IIT's 2009 Design Research Conference: It's all about Synthesis 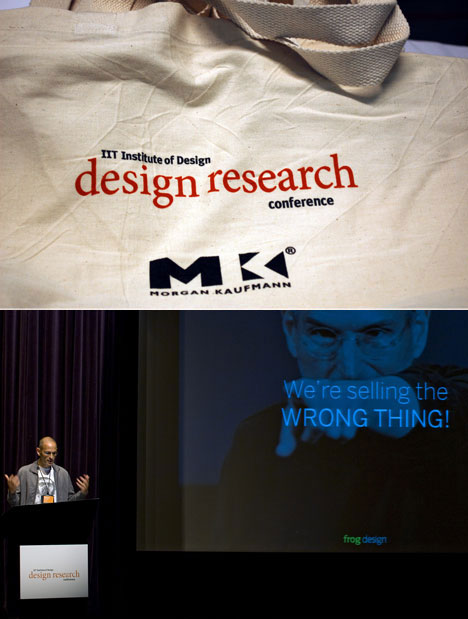 Robert Fabricant, Vice President of Creative at Frog Design, opened IIT's two-day Design Research Conference in Chicago this past week with a slide diagramming the peak and collapse of the housing market. At the click of a button, he swiftly compared this slide to one diagramming the recent rise in demand for design researchers. The two were almost identical, with one exception; the market for Design Researchers hasn't crashed, yet. Fabricant goes on to describe this phenomenon as "an ethnography bubble," and he posed this question to the audience; "Where did we go wrong?"

Despite the recent corporate inflation of the need for ethnographic research, Fabricant reminded us that designing based on observations of humans isn't a new way of working. He used Henry Dreyfuss's Designing for People, written in the 1950s, to illustrate his point. Fabricant argued that design research is really just "common sense," and he emphasized that you don't need special training to do it. Indeed, many of the Design Research professionals I talked with at the conference come from diverse backgrounds. They were once mechanical engineers, AIDS researchers, journalists, and actors, not trained ethnographers. What brought them to the field was a strong interest in human behavior and "being good at listening and talking to people." Fabricant explained in simple terms how the "bubble" we are currently experiencing stems directly from the treatment of design research as a commodity instead of an integrated part of the design system. He postulated that as researchers, we are "selling the wrong thing." The user insights we currently find at the end result of design research projects, "have no inherent value, and must be translated into meaningful ideas." Fabricant's call for a "drive to results and outcomes" is one method for revaluing research's role in the design process as well as the market. 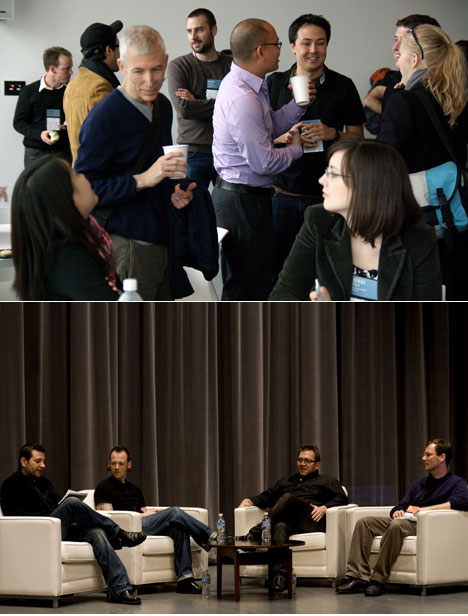 Over the next two days, I heard the call for change repeated throughout the conference's talks and workshops. During a panel discussion moderated by David Armano, Jon Kolko, Associate Creative Director at Frog Design, asserted his opinion that, "Design research insights aren't worth the paper they are written on if they can't be taken forward into action." According to Kolko, companies are increasingly concerned with seeing results, due to the current economic downturn. He often hears, "If we're paying you this much you'd better be making something." His solution for bridging the gap between design research and production is Synthesis, which he defines as "an abductive sensemaking process of manipulating, organizing, pruning and filtering data in the context of a design problem, in an effort to produce information and knowledge." Or put in simpler terms; "Making connections between what we've learned and why the hell that should matter."

Interestingly, many professionals at the conference felt their companies were weakest at Synthesis, and three of the four discussion panelists agreed. This weakness is attributed in part to a lack of effective communication and strategy between design teams. Dan Saffer, founder of Kicker Studio, was the only panelist fully confident in his company's ability to synthesize research into design outcomes. His team's process, which he described as "painful but powerful," consists of concurrent research, design, and engineering. According to Saffer, his mixed teams achieve synthesis because each discipline gets to affect every step in the design process. He conceded that this more iterative, less linear way of working can be frustrating, but maintained that it leads to stronger, provable results.

Jason Fried added fuel to the fire when he advocated for the removal of all "abstractions" from the design process. His company, 37signals, works in the absence of design briefs, personas, functional spec documents, and wireframes. He called these documents "artifacts" and "representations of the real that create the illusion of agreement when there isn't any." Fried instead operates his business with the mentality, "dive in and figuring things out as you go." "Building it," according to Fried, is the key to successful design because "you don't know if your ideas are any good until you can use them." While his process seemed extreme to many audience members, who struggled to understand its potential application and relevance within their own work, Fried's emphasis on the need for concrete design deliverables clearly reiterated the importance of translating ideas to actionable outcomes.

In the conference's closing talk, Ryan Armbruster, founder of the SPARC Innovation Center at the Mayo Clinic, encouraged the audience members to "get to prototypes as fast as possible." Armbruster emphasized that the key to differentiating yourself competitively is to connect with customers at a deep level, and he challenged us to "Go beyond asking questions, get the people you are trying to help involved, and make what you're doing tangible." Even if you are designing for something as intangible and heterogeneous as service design, Armbruster showed us that Synthesis offers design researchers the opportunity to produce new service offerings that are embedded in reality. Synthesis is about acting as a catalyst for change, with human behavior driving its outcomes. In the words of Ezio Manzini, "We create the conditions, not the solution."

At the end of two full days of talks, workshops, and plenty of time for networking, the student-organized and run Design Research Conference at IIT's Institute of Design fulfilled its aim to look beyond research to how and where human-centered design can leave a tangible impact. In the era of open innovation, design researchers are now "in the consequence business." In order to remain relevant in our current economy, we must to learn to translate and synthesize our research insights into tangible outcomes, while always remaining true to human behavior.

IIT's 2009 Design Research Conference: It's all about Synthesis