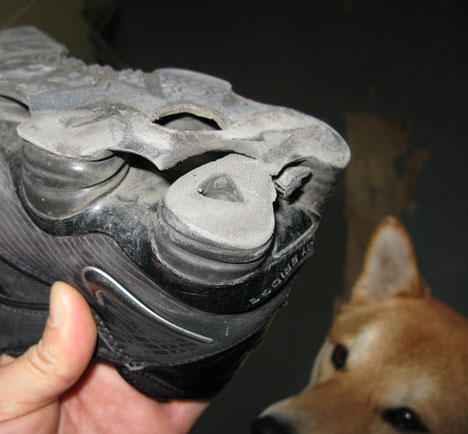 I do a lot of walking, mostly because of little Betsy here and her adopted brother. I aim for two to three hours a day of urban perambulation, which has destroyed not only my schedule but also my sneakers; I go through running shoes like nobody's business. 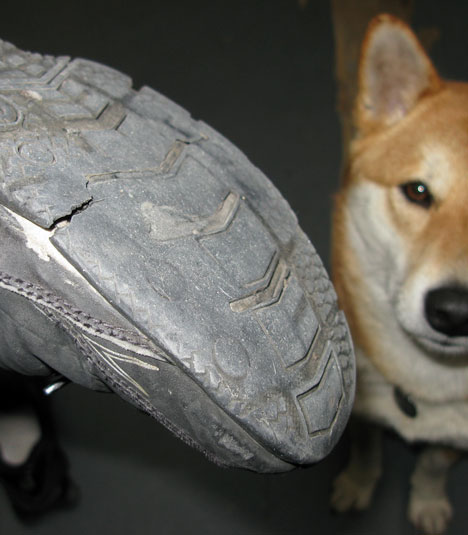 I was still willing to live with this current pair even after I wore most of the treads off, but now that the sole has cracked in the middle and worn off completely at the heel (leading the little Nike Shox absorbers to make an annoying clicking sound), it's time for a replacement. In a few minutes I'm headed out to the 21 Mercer store to see if I can snag a pair of these, which are only being sold for one day: 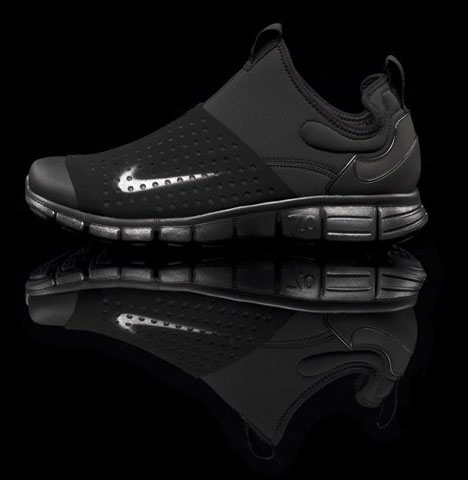 But what to do with the old pair? I donate all of my old clothes to the Salvation Army, but kicks that aren't any good to me aren't gonna be good for a homeless person either, as they probably walk as much if not more than I do. And I don't just wanna throw 'em out.

Following up a web tip, I learned that Nike recycles sneakers, and not just some of the sneaker: They separate each one into three parts--the fabric upper, the foam in the midsole, and the rubber from the outsoles--and turn that into a whole new material that they call Nike Grind.

* Nike Grind Rubber, made from the shoe's outsole, is used in track surfaces, interlocking gym flooring tiles, playground surfacing and even new Nike products.... It's also used in trim items like buttons and zipper pulls.

* Nike Grind Foam, made from the shoe's midsole, is used as a cushion for outdoor basketball and tennis courts, as well as futsal (indoor soccer) fields.

* Nike Grind Fiber, made from the shoe's fabric upper, is used in the creation of cushioning pads for facilities like indoor synthetic courts and wood courts.

This video shows the process in action in Tempe, Arizona:

Learn more about the process here.