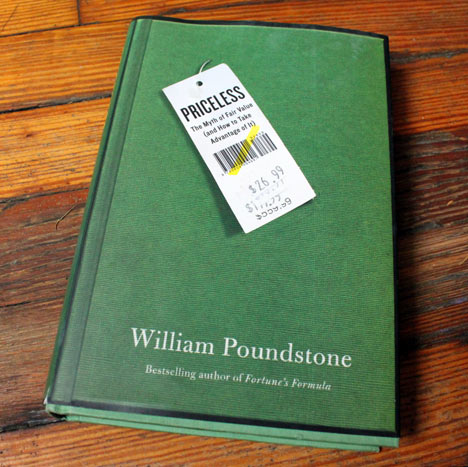 One might hope that the real estate bubble and 2008 bust might shatter once and for all the myth of the rational consumer, but unfortunately our profligate ways don't show any signs of slowing. John Stuart Mill coined the term homo economicus, to refer to an idealized human consumer who always behaved with rational self interest. Salespeople, however, whether hawking Cadillacs or Gucci loafers, have long realized that J.S. Mill was a little off the mark. When it comes to money, human beings are, well, more than a little bit crazy. While a few notable psychologists and economists have been chipping away at the efficient market hypothesis since the 1950s, their thinking hasn't yet trickled down to the business community. With his book Priceless: The Myth of Fair Value (and How to Take Advantage of it), William Poundstone finally takes the last 40 years of economic psychology from the lab to the showroom.

While the cover of Priceless shows a price tag in relief with successive markdowns and the subtitle includes the parenthetical "and how to take advantage of it," Priceless spends far more time on the history of economic psychology than the pricing games any prospective seller can play. That said, the source material that Poundstone is drawing from is exceptionally dry and often mathematical, so readers should be thankful that the author does an exceptional job of presenting difficult to grasp material in an entertaining and engaging way. Priceless is cut into short quick chapters that bounce quickly through decades of research and science using anecdote and analogy, before settling down into analysis and application about halfway through the book.In the beginning Poundstone introduces us to several colorful characters such as S.S. Stevens. Stevens once created an entire fake optometrist's office on a moving gimbal to see how much lateral motion a subject could tolerate before getting queasy ... his work ensured that while present day skyscrapers may induce vertigo, they don't induce nausea. Later he introduces the Allais paradox, which proves, economically, that a bird in hand is worth two in the bush. Allais hit upon the idea that human beings treat certainty differently than risk. To illustrate, imagine how much you would pay to have a bullet removed from a gun with which you had to pay Russian roulette. If you're like most people, you'd pay more to remove one bullet from a gun that had only one in the chamber than you would to remove one bullet from a gun that had four in the chamber. Although in both cases your chances of survival improve by 1/6th, the comfort derived from removing the last bullet from a gun is very nearly priceless. These observations were initially cast as economic "paradoxes" until two Israeli psychologists demonstrated that virtually all human beings had systematic biases under uncertainty.

The work that Daniel Kahneman and Amos Tversky did in what they called "Prospect Theory" ultimately won Kahneman the Nobel Prize in economics, but their work on economic thought included other biases such as anchoring and ultimatums. Any of these topics is worth a book of its own, but Poundstone covers enough of each to give the reader a background sufficient to tackle the last section of the book, where he discusses the application of pricing theory in the real world. While anyone curious about the ultimatum game can consult Wikipedia (trust that Poundstone does an eminently more readable version), the best way to address anchoring and prospect theory is to deal with them in the real world.

Of the two, anchoring should be of far more interest to anyone in a sales job. Poundstone spends the whole book working up to the subject, and he does a masterful job. Put simply, nothing in the human sensory experience is absolute. As artists and designers, certain facets of this concept should be simple. Painters know that color is entirely relative. When a child draws the sun they place a yellow smear against a white background. Since the yellow rarely confers brightness sufficient to get the metaphor across, adults everywhere are forced to feign appreciation of radiating lines of "brightness" that totally fail to convey the spectacle that is our sun. An artist, however, takes advantage of contrast, using the darkest portions of their pallet right next to the spots that they want to look the brightest. Amazingly, price functions the same way. Want an ostrich handbag to look cheap? Place it next to a $7,000 alligator clutch.

Several common pieces of folk wisdom collapse when viewed through this lens. Although common wisdom states that job seekers should ask the employer to make the first salary offer, Poundstone dissents. Since prices are perceived on a relative basis, applicants should always request a salary figure. Simply by putting a number out there frames the conversation and sets the mark for the rest of the conversation. Obviously, the effect of highballing your salary demand fades as your salary demand gets larger, but simply asking for significantly more than you feel you deserve shifts the entire conversation upward.

For most people, price is an abstraction. It's an ordinal scale with no upper bound. Interestingly, price obeys a power law. How much money would you need to receive to be twice as happy as if you received $100 in an envelope? Chances are it's more than $200. Indeed, experimentally, most people say they'd need about $400 to be twice as happy ($100 times (2 squared)). Aside from trial lawyers, however, most people don't think about price in this way. While large companies hire price consultants to help them navigate the inconsistent mind of the consumer, sole proprietors rarely have access to this sort of information.

Unfortunately, prospect theory, which won Kahneman and Tversky the Nobel Prize, is s a little harder to apply in the everyday world. Knowing that human beings value losses and gains asymmetrically is not a surefire way to make money unless you own a casino with some very complicated rules. Poundstone spends a significant portion of the book discussing the leading edge of behavioral economics, but those discussions don't quite square with the subtitle of his book. Although the cover implies that financial rewards can be gained by understanding the myth of fair value, the actual application of the concepts contained within is a little thornier. We're quite certain that any reader who picks up Priceless will find a variety of pricing tricks that they could apply to their business, it's hard to predict offhand which ones will work for them. Consequently, rather than being a how-to manual on exploiting irrational consumers in the shopping aisle, Priceless spends most of its pages explaining some rather arcane concepts that by their very nature resist understanding. As such, Priceless stands as a wonderful eye opener to some little grasped facets of human behavior, but Core77's audience might have to do a little further research if they want to apply leading edge economic thinking to their particular product pricing today.