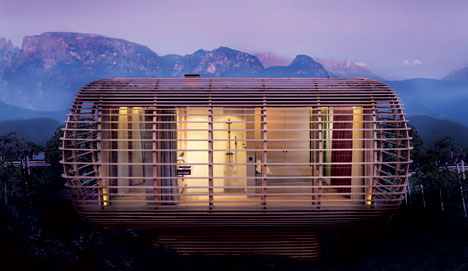 Berlin-based Studio Aisslinger has devised and prototyped the FinCube, "a vision of temporary living." Provisions for "nomadic living" combine with a "natural high-tech" aesthetic in this house, which is modular, sustainable, tranportable and low-energy. The prototype was built near Bozen in Northern Italy, with a killer view of the Dolomite mountains, and has since been moved (!) to nearby Ritten, where it is now on view.

According to the studio, the house is made entirely of locally supplied, long-lasting and recyclable materials, provides 47 square meters of living space, and manufactured by Tyrolese craftsmen. 360 degrees of glazing is surrounded by a skin of wooden slats—the space between serves as an exterior walkway.

It appears that the FinCube is designed less for living and more for low-impact luxury vacationing. According to the studio, it's easily dismantled and requires a minimum of soil sealing (two square meters), allowing the site to be easily "renatured" after moving.

On that note, there has been talk of using the FinCube as a prototype for the future of hospitality: temporary hotel zones could be created in beautiful landscapes without permanently altering them, "answering the future needs of flexible and smart tourism." 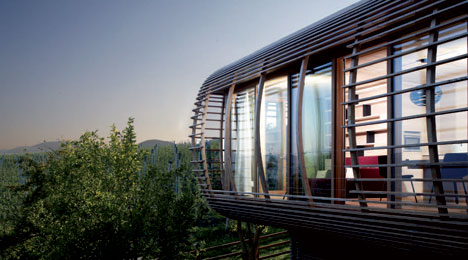 We love the flexibility of this idea, but we wonder just how difficult these are to assemble and transport in reality—for example, if vehicles are required, the range of locations is severely limited and the ecological footprint not quite so ideal.

What about a yurt?