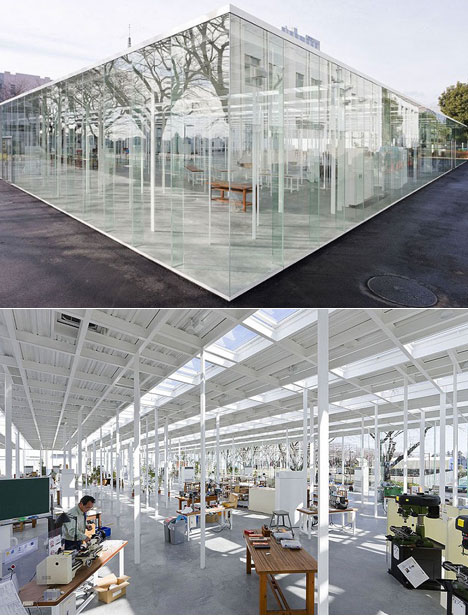 Looks like a rendering, dunnit? But that's an actual photograph of a student projects center at Japan's Kanagawa Institute of Technology. Made mostly of glass, it was either designed by a vengeful architect to torment his sworn-enemy window washer, or they just made it because it's freakin' cool and lets in a lot of light. And while we wouldn't be surprised to see a glass structure like this in, say, Paris or Germany, we were quite surprised to see it located in Japan, where earthquake-proof construction doesn't yield a lot of structures like this.

Designed by the architecture firm Junya Ishigami and Associates, the building, which is supported from within by seemingly randomly-placed columns, has a rather interesting story. Hit the jump to read about it in Ishigami's own words. 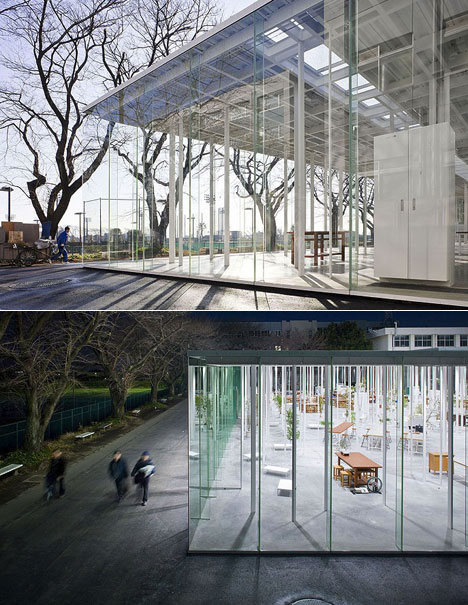 This is a studio/workplace constructed on the Kanagawa Institute of Technology campus in the suburbs of Tokyo.

The client wanted this structure to be a place where students could work on diverse self-initiated projects to make things, and to also have a high public capacity, as it would be open for use by local children.

With regard to the flexibility this building required. I saw little need to tailor sections of the plan very differently according to the various programs it would house, as each of the individual spaces would necessarily be specialized to some extent. Then, to ensure that users would be have the freedom to alter the spaces to meet different needs within a reasonably short time period, it began to make more sense to me to pursue flexibility in the relations between adjoining places, and in the way various spaces are connected with each other. This view led to the thinking that some soft, ambiguous kind of borders could be invented by raising pillars in a random fashion.

To be specific, I wanted to provide no earthquake-resistant walls. but make this building work on just an ensemble of sfight pillars of varying proportions. What shape the sections would be, the coordinates and the angles of the pillars would be adjusted by the millimeter. How "densely set' should the pillars be? Resultant spaces would be best open toward which directions and to what extent? The studies we did to examine these issues became quite extensive. We did models in numerous scales ranging from small to extremely large. Sketches were made with the plan depicted in dots, to explore just what kind of spaces would exist between pillars. Studies of the plan were done with a program written for this project on an special CAD. We had an Excel program created to do trial calculations and give us general ideas on the structural soundness, and so on.

All these were carried out simultaneously throughout, and in the end we were able to arrive at a structure that stood on 305 pillars, almost none of which had identical sections or angles. At the same time, borders between individual places emerged, as a result of these pillars. Even as I, the architect, am creating the space deliberately and with clear intent, I am not the one who can tell you what determined the decisions made. Is the basis structure, function, or design-? I had hoped for this, for even the borders between such bases to become indistinct.

In fact I would say that in an ideal building the pillars would have the same presence or outward bearing, and be formed on the same dimension as. the surroundings. the furniture and the greenery. I was hoping. by creating all elements equally strong in presence-as well as possible-that a very generous and productive degree of flexibility could be achieved.

I was interested, I would say now, in the promise held by a kind of abstractness having nothing to do with the abstractness that we consider a property of diagrams and such.