Quirky's Pivot Power: Power to the people--designed by the people

We think Quirky, the "social product development company" that relies on crowdsourcing for its design and engineering teams, may have their first mass-market hit on their hands: the Pivot Power, proposed by RISD design student Jake Zien, was 75% of the way towards meeting their target of 960 pre-orders at press time this morning, despite going live just a day or two ago. Once 100% of the pre-order target is met, the product goes into production.

The Pivot Power is a great idea: A bendable power strip that accounts for the fact that power adapter manufacturers are like backpack wearers on the subway--they have no consideration for anyone else's space. The Pivot Power's individually-articulated power modules can be angled this way and that, so everyone gets access to juice without blocking off a neighbor. As far as we can tell the Pivot Power will be relegated to the floor, as opposed to being wall-mounted, presumably because gravity may not support heavy power adapter bricks plugged in at angles.

The aesthetic problem still remains, that all of these different adapters and cables when plugged in still look ugly as heck, but that's not the Pivot Power's fault; it just happens to be one of those objects that looks better by itself. Still, we feel the numerous PP's contributors have solved the problem about as well as can be done, and the retail price of $25, while certainly higher than that of a normal power strip, is still low enough that pre-order sales are moving briskly.

Also worth a look, particularly to us ID'ers, are some of the design contributions and ideas gathered during the Pivot Power's industrial design process. What's fun about us for Quirky is not only the products that come out of the process, but the complete transparency of their development. 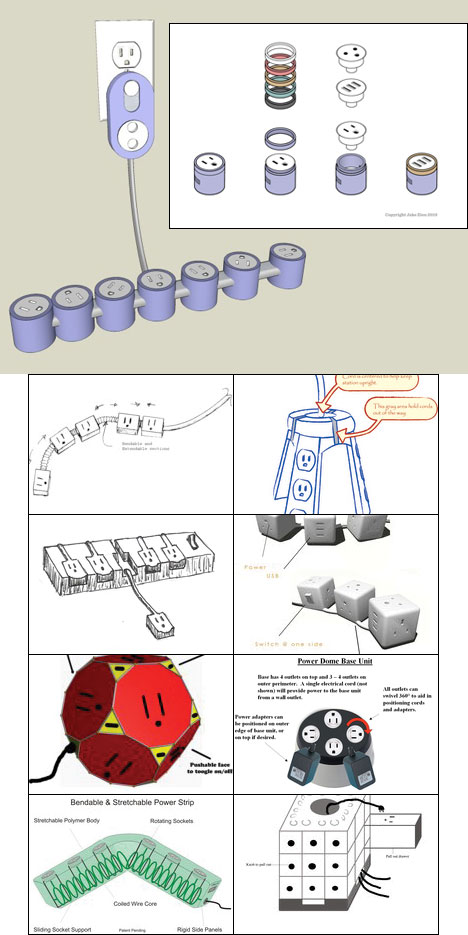 Quirky's Pivot Power: Power to the people--designed by the people