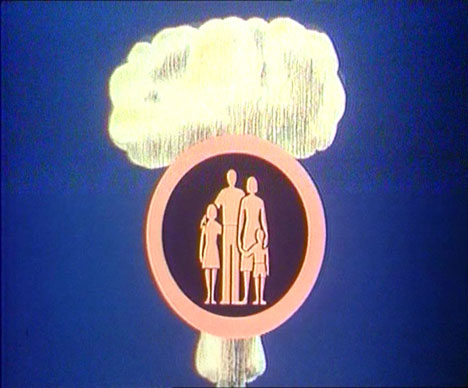 A still from the "Protect and Survive" animation.

As designers of products and services, it might be argued that we tend toward a more optimistic view of the future of the world and human behaviour within it. But might we also gain valuable insight from considering how less perfect futures (or, indeed, presents) are crafted, and does this way of considering the people we design for and the world we inhabit have any practicable benefit?

My own interest in this topic comes from a panel I moderated recently at the SxSW Interactive festival. I opened this discussion with a short video of the animated film When the Wind Blows, based on a graphic novel of the same name by Raymond Briggs. The story tells of an elderly couple living in a remote house in England who are dealing with a nuclear war and its aftermath. It's one of many science fiction stories of near-futures that sound warnings of what might happen to humanity—Brave New World and 1984 being two of the more obvious examples of this. A new adjective to describe exactly these types of narratives has come into use recently that I rather love—"ballardian," meaning something that evokes the conditions of dystopian modernity in the work of the late J. G. Ballard. Though they may appear to have a bleak view of our future, these ballardian visions can serve as rich sources of inspiration for our work. 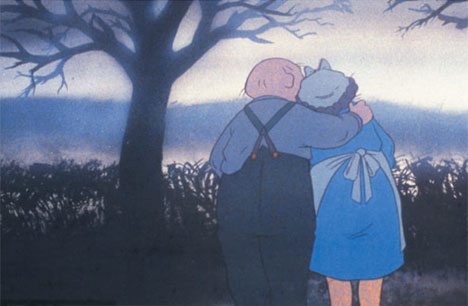 A still from When the Wind Blows.

Raymond Briggs took the inspiration for his graphic novel—both in terms of the subject matter and the overall tone of futility—from a series of pamphlets and animations produced by the government of the United Kingdom to educate British citizens about what to do in the event of a nuclear conflict, entitled Protect and Survive.

When faced with an unsolvable problem, how can we still be effective?

Seen as designed artefacts, the Protect and Survive publications are fascinating. Faced with the brutal reality of what would happen to a civilian population in the event of a nuclear attack, the creators of Protect and Survive must have been faced with a hugely difficult set of challenges, which one can certainly see reflected in the final leaflets and films themselves (some of these films can be viewed at the National Archive site (pay attention to the soothing voice of the narrator and the cartoon-like visuals in particular). The advice to citizens on how to survive a nuclear onslaught and the subsequent radioactive fall-out is presented with the paternalistic voice of a government convincing a populace that there really is nothing to worry about, while most of the instructions would in truth offer little to no protection—"keep calm and carry on," indeed. The final frame of When the Wind Blows, depicting the two protagonists slowly dying of radiation sickness under the lean-to they have constructed according to government directions, remains in the mind a long time, and the poignancy of Briggs' story stems largely from the way in which he depicts the inadequacy of this government advice in the face of such destruction. 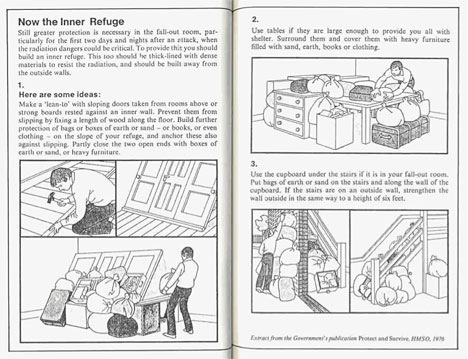 Page from "Protect and Survive," showing instructions for how to construct a fall-out shelter.

But consider what the discussions behind the creation of Protect and Survive must have been like. Knowing that it was impossible to create something that would truly help a population in the event of nuclear attack (because, really, nothing could). What might the next best outcome be? Perhaps an attempt to alleviate mass panic and civil disorder by providing people with simple but time-consuming tasks to concentrate on, keeping them occupied, proactive, and hopeful. Protect and Survive succeeds in this, even if that hope is untenable. Faced with a potentially inevitable catastrophic set of circumstances, the designers embodied principles of pragmatism over idealism in the artefacts they created, all the while working within a realization that some problems cannot be solved. This might be hard for us to come to terms with as designers, but Protect and Survive demonstrates that it's certainly a useful space for us to explore. When faced with an unsolvable problem, how can we still be effective? 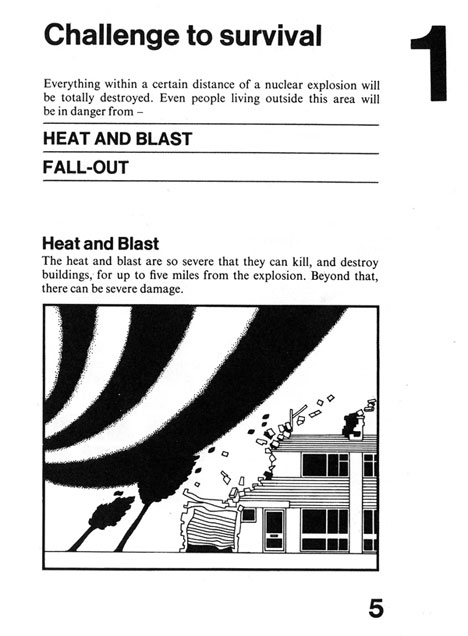 Another page from the Protect and Survive pamphlets.

Nowadays, the most obvious threat of global apocalypse comes from a different direction. IDEO's Living Climate Change initiative seeks to investigate possible near futures of our world, futures in which we didn't take action to combat the causes of climate change as well as those in which we did. Although the project ultimately claims to offer solutions that are "optimistic" (as well as "real-world," if that's not a contradiction), it's also fascinating to see the submissions that point to a future where we miss targets (here, here and here) and consider whether these are more motivational in encouraging us to change our behaviour, in a similar way to how Little Red Riding Hood might warn us about the danger of talking to strangers.

Tomorrow's Thoughts Today's Where The Grass is Greener—discussed by Liam Young during the panel—also speaks to this view of an alternative future, except it is fictionalised further to provoke to an even greater extent. The project describes a community that builds itself around ideals of sustainability and conservation to such an extent that it walls itself off from the horrors of the massively consumptive world around it, allowing its citizens to live in blissfully idyllic ignorance. Transgressions such as "harbouring non-recyclable material" or "wantonly stepping on plants" are punished with isolation in a prison cell that affords only a view of the horrors of the "rampant consumerism" in the world beyond the community. During the panel, Liam discussed some of the goals and motivation behind the project. He used stories of a perverted utopia to highlight a perceived trend toward "ecofascism"—over-regulation in the name of a sustainability agenda that privileges those who can afford to participate in it without looking at wider societal change. One danger of this, and the premise behind the project, might be the creation of a segregated society (a theme that also appears, albeit in a less fictionalized sense, in the IDEO work). 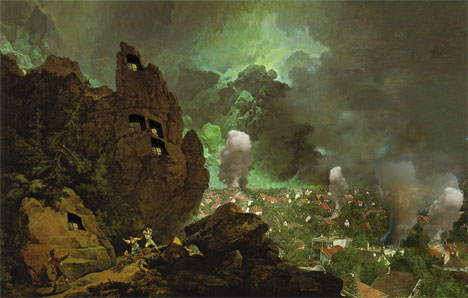 Incarceration towers from Where the Grass is Greener.

Scaling back a little from stories of oppressive future regimes and unavoidable global catastrophe to more a individual scale, we can again find inspiration in considering how to accommodate less than ideal conditions or behaviours. If we take the position of admitting real human flaws, we can design supportively, enabling individuals to cope rather than setting them up for the frustration associated with the failure of not fitting into our utopian ideals, like the time-honoured "programming a VCR" trope.

Take the common and highly personal condition of loneliness as an example. Around one in every four urban households in Switzerland is inhabited by a single working man. This fact opened the doors to a rich area of enquiry for a group of Swiss Designers at the Zurich University of Arts. Instead of attempting to create a range of products that might alleviate this loneliness, the designers chose instead to craft a range of products that celebrate it. An ironing board doubles as a coffee table and crockery shaped for the diet of the single man (pizza and noodle soup, apparently) expresses support for this lifestyle rather than attempting to "cure" an "undesirable" condition. 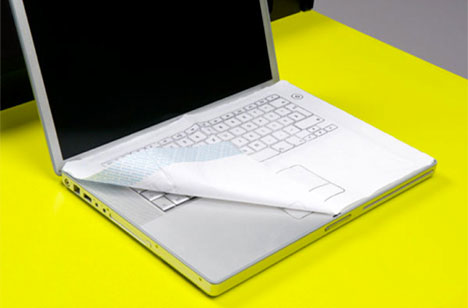 A keyboard napkin: a product for the single man.

Greed is another human attribute not normally viewed in a positive or productive light. I recently worked on a project for a company who were in the process of developing an in-home energy monitoring device. One of our central challenges was to explore what motivating factors would initially engage people with the device and keep them interested in using it once the initial infatuation had worn off. We talked to a variety of people about their energy usage and attitudes towards conservation: landlords and tenants, retired homeowners and young professional couples. Going over the output of these conversations revealed an interesting common thread: no matter how aware of global conservation issues and the subsequent need to reduce their energy consumption our interview subjects might have been, they all ultimately expressed reservations about sacrificing the comforts to which they felt they had become entitled. Additionally, most displayed far more interest in the idea of saving money than the idea of saving the planet.

By being honest in our design work about the imperfections of the worlds both outside and inside us, we might craft more products and services that speak to who we are in a straightforward way.

While the desire not to give up creature comforts might not be defined as greed in the strictest sense, it did present a barrier to the adoption and continued use of the system. But this insight suggested that relying on a sense of altruism wouldn't be enough, and led us to design for the idea of what we eventually termed (semi-seriously) "responsible luxuriating." Within the interface design of the device, we deliberately surfaced the financial implications of conservation and built a system of goals that provided permission for people to indulge themselves while still feeling good about doing so, attempting to remove the perceived austerity often associated with conserving behaviour. While it might sound quite Pavlovian on the surface, it does game the system so that every participant—Gaian and human—ultimately wins.

From whispered ghost stories around a fire, to dystopian (or ballardian) narratives in fiction, to government-produced advice for avoiding certain death, giving form to that which we are most afraid of has always been part of our rcultural history, even if—as with Protect and Survive—it only serves to soften the blow of catastrophe. I hope that with these few examples, I've begun to hint at how a design process that doesn't necessarily default to an optimistic view of our behaviour or our future can form a valuable and productive mode of enquiry, and lead to equally impactful outcomes. By being honest in our design work about the imperfections of the worlds both outside and inside us, we might craft more products and services that speak to who we are in a straightforward way, and, in doing so, offer more meaningful, true support for the way that we really live our lives—and maybe lead us to less artifical utopias.

For this article, I'm indebted to my wonderful panelists from SxSW: Rachel Abrams, Liam Young and Jason Nunes, as well as to all the audience members who made the effort to get up that early, stay awake, and ask great questions.

Ben is a designer at Adaptive Path in San Francisco where he still has trouble pronouncing the world 'nuclear.'