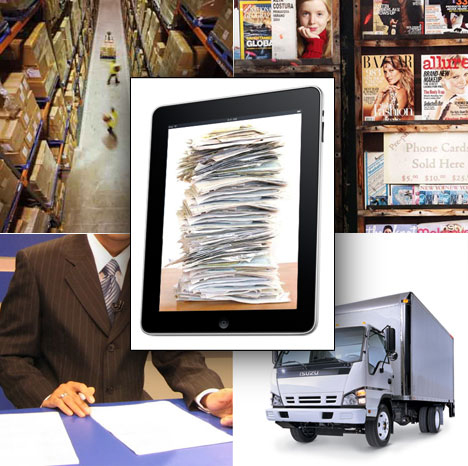 That doesn't stop many of us from trying, of course. I bought my own iPad in an effort to cut down on the physical magazines littering my apartment, and it's helped, a little. I've also read a half-dozen books on it that I didn't have to make shelf space for. But when it comes to editing copious amounts of text, as with the freelance book and magazine projects I occasionally pick up, I still can't get it to replace the mountains of highlighter-ink soaked paper these projects accumulate.

It seems the iPad is best at replacing paper in situations where whatever's printed on the paper doesn't have to be edited much. Early on we heard about newsrooms using iPads to replace the news scripts their desk anchors read from, and the annual projected cost savings was in the tens of thousands. A Businessweek article reports on other instances where this works well, like in warehouses where inventory-seekers need to walk aisles and reconcile stacks of boxes with printed lists.

Two questionable instances are also mentioned--a hotel using iPads to replace menus, and a hair salon using it to replace magazines--as well as a furniture business that will reportedly save six figures by integrating iPads into its physical delivery systems. Give it a read here.