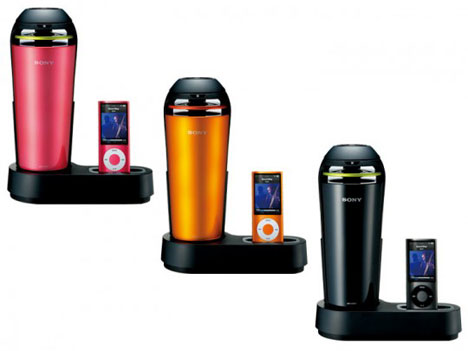 Here's a rather strange, ill-conceived product design from Sony: Their SRS-V500IP is an iPod dock holding a cylindrical speaker equipped with a "diffuser panel" that spreads the sound in 360 degrees. So far so good. Here's the weird part: The detachable speaker is touted as being able to fit in your car's cup holder, so you can use it while driving.

Um...don't most cars these days already have stereos, often with iPod hookups? A detachable speaker would make sense if it had its own rechargeable power source, yet this one apparently needs to be plugged into either its home dock or a car's cigarette lighter to get juice. Doesn't make much sense to me, but perhaps the Japanese-market-only product loses something in translation.

via cult of mac