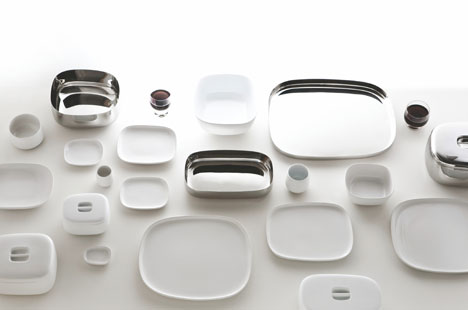 Surprisingly self-effacing among the high profile wit and higher profile designers of Alessi, the new Ovale line of tableware from Ronan and Erwan Bouroullec may sum up the current design zeitgeist. Alessi is showing off the new line on the September circuit of shows around the world, including this August's Accent on Design at the New York Gift Show, where it caught our eye. A set of stone china, glass, and metal items, Ovale is the first work the star Breton brothers have done for Alessi.

Look at Ovale and you immediately think it is not oval but, well, oval-ly. Plates and containers at first look oval, but at second glance turn out to be not quite. 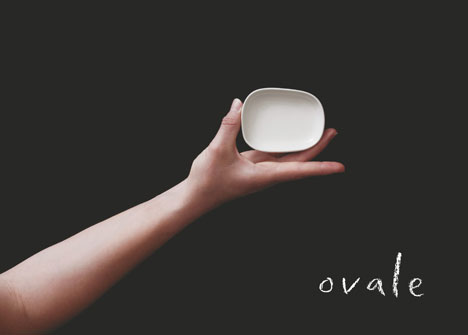 Muted and modest, the forms make you do a double take: they are just barely asymmetrical, by the slimmest of margins. They seem to hover between the hand crafted and the machine made, the freehand and the geometrical, the personal and the generic. In this regard, Ovale may sum up our current relation to classic geometrical modernism, appreciated now at a historical distance, rediscovered and redrawn by a younger generation. Ovale also seems just right for a period that is inclined to substitute the do-it-yourself for the starchitect's model.

"It strives to be original but also wants to be rustic and traditional," says Ronan Bouroullec in the company's literature. "We set out in pursuit of delicate expression." 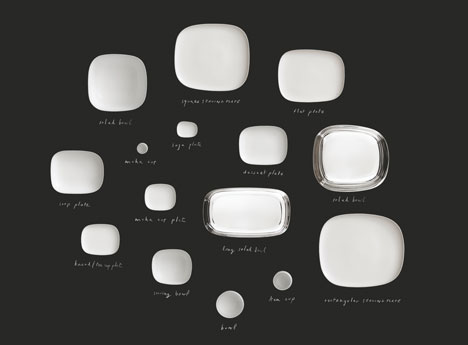 The shapes echo Scandinavian tradition and a kind of domestic modernism that became international. Especially the white stone ware pieces, with their sunken handles, recall such sources as Dansk. The stainless steel pieces evoke Alessi's humble beginnings, as the maker of almost generic metal wares for restaurant tables. Along with the glassware, these could be Ikea outdoing itself.

"Delicate, slightly expressive, simple, almost neo primitive" is the way Alberto Alessi describes it. "There is a desire for simplicity," say the Bouroullecs. "We tried to reach an equilibrium, a project that's not too sweet."

The brothers say they think of Alessi as a "maker of sweet things"—like Willie Wonka's Chocolate Factory. Alberto Alessi has pronounced himself delighted with the idea—but did he notice the Bouroullecs seem fearful of being too saccharine?

Design buffs might well think of Alessi as the source of designs as tasty as Wonka Bars. But say sweet in Italy and you can't avoid the echoes of la dolce vita—the idea of finding the sweetness in the every day round of life as opposed to achievement or wealth.

"It speaks about everyday life," says Ronan Bouroullec, "it is about everyone getting together for dinner." Ovale's lines just touch on the attractive without being gorgeous or romantic. It is "sweet but not too sweet."