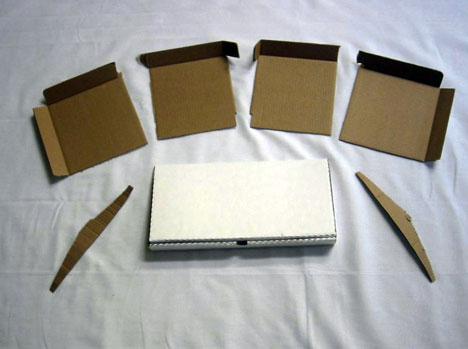 Julius Caesar once ruled the world's most powerful empire, but these days his chief legacy is that he's got a salad named after him. It's kind of messed up, if you think about it--a Cobb Salad is at least as popular, and I don't even know who the hell Cobb is.

Another ancient empire legacy food is pizza, which was reportedly invented in Ancient Greece (an assertion that can get you punched in the face in parts of Brooklyn). In America, the effects of pizza are pernicious: In addition to contributing to bulging waistlines, pizza is a high-waste food. Every pizza place I know delivers the pie in a cardboard box and throws in a stack of paper plates.A company called Eco Incorporated has invented the GreenBox, a better pizza box that we can at least get a little more use out of before we throw away, and which can perhaps supplant the paper plates:

I know it's not the sexiest thing in green design, but it's little things like this that can help make a difference in the long run. (I say this even though you never know what's going to happen in the future--just ask Caesar what he thought he'd be most remembered for.)