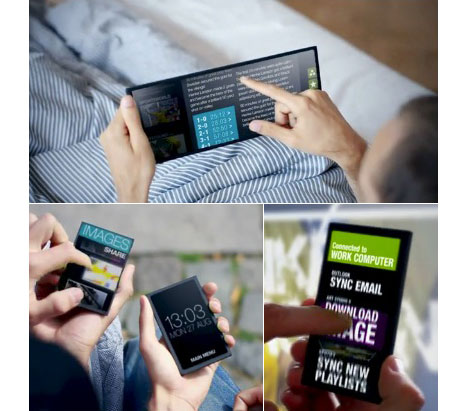 A couple of weeks ago we showed you a "Future of Screen Technology" video by TAT (The Astonishing Tribe), which seemed pie-in-the-sky amazing and almost too fantastic to be realized. But just today TAT has announced that Fujitsu Japan "will reveal a ground breaking dual screen mobile phone user interface powered by TAT's design and technology initiatives." There's no word on which of TAT's features will make the phone, although the announcement mentions that "going dual screen radically changes the user interaction and requires advanced design," while Fujistu Mobile Phone Group director Takeshi Ueno says "we are delighted that TAT's UI technology enables the type of new design paradigms to create advanced UI." We're dying to see what they come up with, but will have to wait until the test phone's unveiling (hopefully tomorrow!) at the CEATEC 2010 exhibit in Tokyo.

Click here for another look at TAT's demonstrative video.