Fast Co. interviews Astro Studios on the design of the Boxee 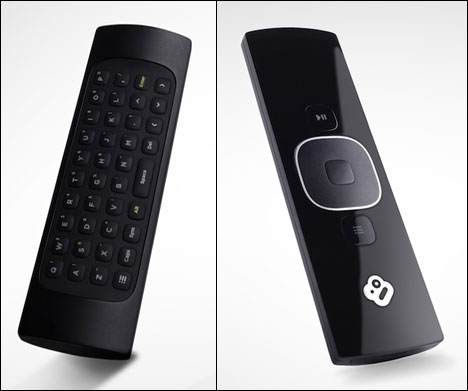 If I told you you had to design a two-sided remote control, how would you deal with the problem of accidentally pressing buttons on the bottom while you're trying to interact with the buttons on top? My first instinct would be to spec out an internal gyro so that the device knows which side is up, and negates the down-facing buttons; but Astro Studios, the firm behind the Boxee and its two-sided remote, solved it through "simple physical design":

One side is very simplified and pure with play and pause buttons and a four-way navigation pad. We placed those controls in the center of the remote, which keeps your hands away from those buttons when you're using the QWERTY side, which you hold like a phone when you're text-messaging. It took a couple mockups to dial in the right proportions, but it's actually quite comfortable -- the physical design itself is what keeps your hands away from the areas you don't want to use.

You can read more about the design of the Boxee, including Astro's interesting decision to waive initial fees in exchange for Boxee equity, at Fast Company's interview with Astro.