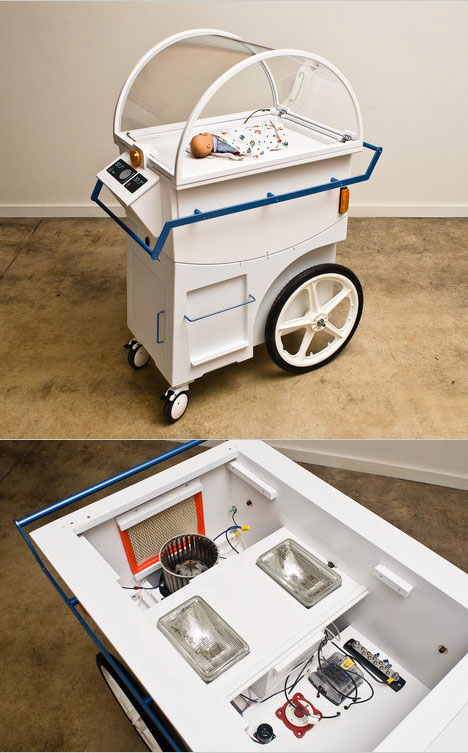 Two years ago we read a report on Treehugger about the Massachusetts-based nonprofit Design That Matters' endeavors to create an infant incubator out of recycled car parts. The thought that dead Toyotas could bring life to some of the nearly 4 million infants that will die of post-birth complications each year was heartening; for remote villages without hospitals, a local dead-car hulk could provide critically useful.

Well, now they've done it. The NeoNurture incubator is featured in the Cooper-Hewitt's National Design Triennial and has received coverage in Time Magazine, and Design That Matters is working towards full production with the assistance of the Center for Integration of Medicine and Innovative Technology. There are still some hurdles to be overcome, as you can imagine for a machine designed to be cobbled together from whatever auto parts are on hand:

The project traces its roots to a heaping pile of dead Toyota 4Runners. "In the summer of 2007, a few guys just tore one apart," [DTM CEO Timothy] Prestero said. "They discarded thousands of pieces until they had things that are plentiful in rural areas: headlight assemblies to provide heat, air-intake filters and such, which could be repurposed without much fuss."

The greatest design challenge for the group has been resisting standardization. "As soon as you say, 'You can only use a 4Runner's headlight,' the value goes out the window," Mr. Prestero said. This problem might ultimately determine what aspects of NeoNurture's approach will translate to mass production.

Read all about it in this Times article.