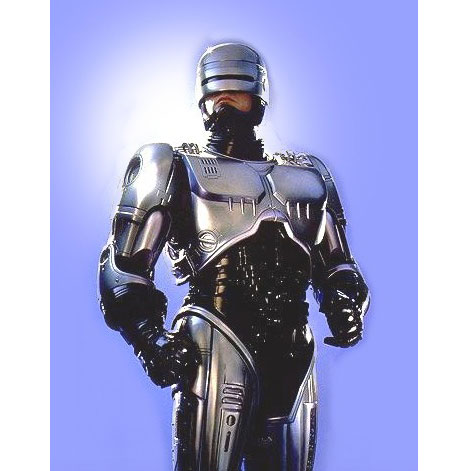 Here's the latest creative project funded by crowdsourcing, but this one's not another Kickstarter ID project. Instead, as the DetroitNeedsRoboCop.com website gives away in the title, it's an attempt to reinvigorate Detroit by erecting a statue of the cyborg po-po. And it's garnered fifty grand in just six days.

The unusual fund-raising effort sprang from a question posed to Detroit's mayor on Twitter last week by "a random dude in Massachusetts," who proposed that the city celebrate "RoboCop" the same way Philadelphia does "Rocky," according to the project's Web site....

"Sometimes it takes a RoboCop to show a different way to do things," said Mr. Paffendorf, a 29-year-old Internet entrepreneur [who helped organize the campaign]. "My hope is that it sets an example and puts this kind of funding on the map, so when people see big problems, they can think, 'If crazy people raised $50,000 for a RoboCop statue, we can certainly raise more to take on something bigger.' "

I guess it's possible a statue of RoboCop could somehow ease Detroit's psychological woes; after all, the RoboCop on a Unicorn project has lifted my spirits innumerable times.