It still rankles me when I think of the ignorant blogger who months ago insisted Apple had "reached the limits of industrial design" with the iPhone 4, his idiotic assertion being that Cupertino's glass rectangle could sustain no further modifications.

Case in point, check out Mac Funamizu's latest concept phone, which manages to breathe life into a perfect little rectangle by the means of some subtle curves in all the right places. (For the record, Funamizu's design is not branded "iPhone-" anything, it's just a concept design of his called the Zimmer.)

I want to touch this thing so bad it pains me to watch the animation:

Japan-based Funamizu (who is fine post-earthquake, by the way, though in an area where goods are being rationed) never ceases to amaze us with his clever concept work. Another of his conceptual objects I'd like to own is his Peel Moving Notifier Concept. 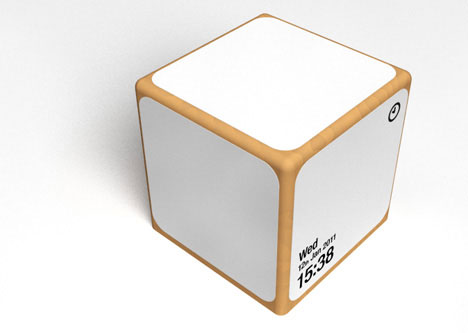 It's a standalone clock that wirelessly syncs with your computer. When it's time to give you an alert, a screen on one of the faces peels backwards to reveal a message/e-mail alert/reminder, et cetera, with the amount of peeling it does correlating with the urgency of the message.