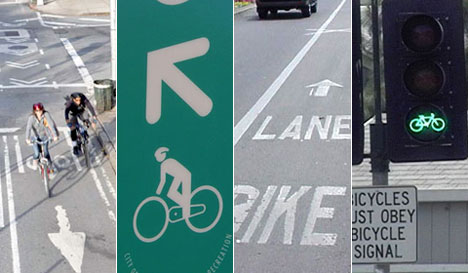 Chances are you've heard of the USDOT, the U.S. Department of Transportation, the governing body that oversees the NHTSA (National Highway Traffic Safety Administration), the FAA (Federal Aviation Administration), the FRA (Federal Railroad Administration) and others. Apologies for the acronym fatigue. The DOT's main mission is "to keep the traveling public safe and secure, increase their mobility, and have our transportation system contribute to the nation's economic growth."

Being a national body interested in connecting far-flung areas, one type of vehicle the DOT doesn't deal with is bicycles, since few of us travel from Boston to Los Angeles via pedal power. That's where NACTO, a relatively new organization, comes in.In the mid-'90s Elliot Sander, then Commissioner of NYC's regional DOT, noticed that although states interacted through highway associations, cities had virtually no interaction in the transportation realm. While New York City and Philadelphia do not physically touch in the way that New York State and Pennsylvania do, there was no reason these cities oughtn't be sharing data and ideas for solutions to the common problems they faced.

Sander started setting up meetings with city officials in Boston, Chicago, Los Angeles and Philadelphia in 1995, and shortly thereafter NACTO (the National Association of City Transportation Officials) was born. At roughly the same time, eleven European cities got the same idea and formed IMPACTS, a network formed to "[exchange] information and experience on Urban Mobility and Transport Policies." NACTO and IMPACTS made contact with each other in 1996, and for the first time Atlanta, Baltimore, Boston, Chicago, Detroit, Houston, Los Angeles, New York, Philadelphia, Phoenix and Seattle could share information with Amsterdam, Barcelona, Berlin, Brussels, Budapest, Geneva, Gothenburg, London, Lisbon, Paris, Rome, Vienna, and Zagreb.

NACTO's official mission is to encourage "the exchange of transportation ideas, insights, and practices among large US cities while fostering a cooperative approach to key national transportation issues" and in practice this covers light rail, buses, trolleys, and bicycles. Here's a video showing NACTO's "Cities for Cycling" program from last year, which brought together representatives from Boston, Portland, San Francisco and New York.

Stay tuned for information on a recent NACTO development.