Festival of Ideas for the New City: Jaron Lanier Keynote "The City as Acuity Chamber" 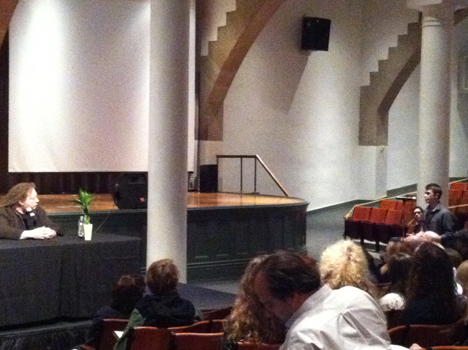 If you haven't read You are Not a Gadget by Jaron Lanier yet, please do.

Called by The New York Times as one of the "Best books of 2010," You Are Not a Gadget offers a powerful and thoughtful critique of Web 2.0 culture.

Lanier is wary of human comparisons to machines. Coming from a roboticist, this is a stiff charge.

The human eye has sensors responsive even to a single photon. Lanier calls this fineness of perception and mobility 'acuity': The ability of humans to finely adjust the information we actively seek. Compare this with a camera, which only passively receives information. In this sense, our vision functions less like a camera and more like a spy submarine, constantly gathering information about our surroundings.

He asks: what if we apply this principle of human acuity to the level of the city? In that case, a city like New York can act as a kind of acuity chamber or amplifier. What a person experiences, even when walking down the street, is amplified in an urban environment like New York. The fates of people in a city like New York are intertwined with their acuity, more so than in, say for example, Omaha. Enter the age of social networks: are online venues like Facebook a place where people can refine their acuity or does it dampen, perhaps even discount this skill? Lanier seems to think these kinds of social networks, which are based on a database model of storing information about people, tend to dampen acuity, a skill that comes from experiencing the world through all of our senses in real-time.

He retells the theory of the demise of Alan Turing, the British mathematician who became famous for cracking the Enigma code during WWII on behalf of the Allied forces. Turing, who was later persecuted for being homosexual, was forced to undergo a hormonal treatment that was based on the analogy of human bodies to steam engine technology popular at the time.

Lanier urges people to consider seeing through fads and be aware of popular analogies like the current one which compares the human brain to a computer.

"So remember, we are neither steam engines, nor Twitter; We are spy submarines," Lanier half-jokingly closes.

Festival of Ideas for the New City: Jaron Lanier Keynote "The City as Acuity Chamber"