Lenticular Flooring Designed to Make You Move to the Right 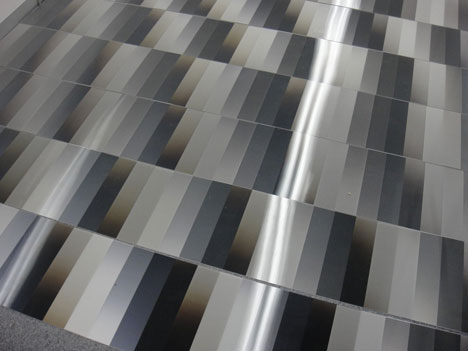 The marks of someone new to New York are manifold, and usually just marginally annoying: The hipster who cannot make the distinction between the East Village and the Lower East Side, the tourist who cannot accurately swipe a Metrocard when the train is arriving and you're behind him on line. But nothing drives me crazier than the group of slow-moving tourists walking four abreast on the sidewalk, carrying on an oblivious conversation and preventing those in a hurry from passing.

I doubt that they were prompted by this particular problem, but researchers at Japan's University of Electro-Communications have created a flooring system designed to encourage pedestrians to move to the right. Flooring tiles printed with lenticular lenses—you know, those striated surfaces that look different from different angles—created the illusion of a pattern that moves to the right when you move across them, and supposedly, "Since people have a tendency to give priority to their visual sense to maintain their balance when they walk, their eyes will be attracted in that direction" and their feet would follow suit.

I'm skeptical as to whether this would actually work, and durability is a problem the research team recognizes, but I don't have a better solution to propose that doesn't involve shoving.