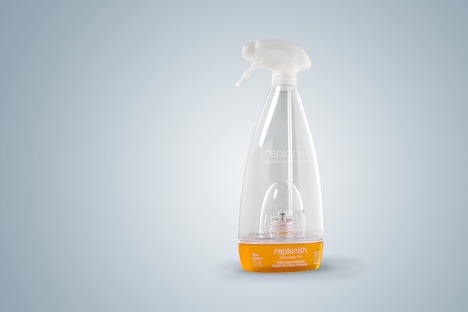 Five years ago I had an epiphany while I was ironing my shirt. I found myself wondering why it was that my ironing spray had to come in such a big bottle? Why couldn't it come with a concentrate I could dilute myself in one integrated bottle, not two separate containers? In fact, why didn't all of my household goods couldn't come in a more sensible, compact concentrate mixing system. The solution I saw in my mind was an integrated bottle built for mixing concentrates.

One morning in April I opened The New York Times to find the article "As Consumers Cut Spending, 'Green' Products Lose Allure" by Stephanie Clifford and Andrew Martin. The crux of the article was that consumers are not willing to pay more for 'green' products, especially in hard times.

As a green products entrepreneur, I believe they shouldn't have to. Consumers can be green and save money, we just have to design better products so they can do both.

Spurred on by my ironing epiphany I went digging in the patent universe to see what ideas were out there; I wanted to know if an integrated bottle system already existed. It didn't. I saw that Arm and Hammer had come out with an "Essentials" line in 2008 that consisted of an empty bottle with two packages of cleaner concentrate shrink wrapped to the bottle. Although its intentions were admirable, it did not offer the consumer the integrated approach to mixing concentrates and reducing packaging waste that I was thinking of. I knew then that I had to fundamentally rethink what a bottle should look like and what purpose it should serve. 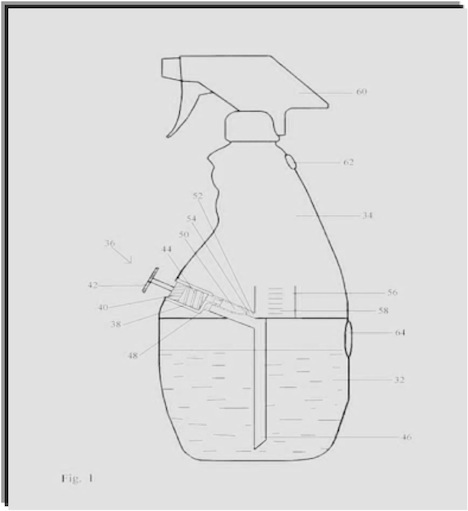 What we thought was missing was a bottle platform that was built specifically for concentrates and was reusable. If we had that, then we wouldn't have to ship water all around the country in disposable bottles. I wanted to develop a reusable bottle based on a system of dispensing concentrates to cut down on plastic waste, promote reusability, and reduce the associated environmental toll of shipping excess water all around the country. I wanted to create a smarter bottle.

What drove my design for Replenish was the desire to re-imagine what the design for a bottle and container should be. To ever move forward, we needed a new design and a fresh approach that could cut out the wastefulness I saw throughout the system, provide an environmentally sound alternative to conventional, pre-mixed cleaners and save consumers money. My goal was to completely reinvent the system to be designed for lesser impact and lower waste.

William McDonough's and Michael Braungart's Cradle to Cradle philosophy came to be my guiding light, so it was only natural that I approached McDonough Braungart Design Chemistry (MBDC), their green chemistry firm, to put Cradle to Cradle principles to use in building Replenish. I wanted to design a product made with materials with life cycles that are safe for human health and the environment.

The Replenish bottle is built to last for years, not months, the cleaning solution itself can return safely to the environment, and the concentrate pods are easily recyclable, making it easy to collect and recover the value of these materials following their use.When I started working with MBDC, nothing like the Replenish bottle design had ever been seen before. Since we were going against over 60 years of bottle design history, MBDC commissioned the expertise of Radius Product Development and Eastman Chemical's Specialty Plastics division to develop a new manufacturing approach that could manufacture the unique geometry and valve system and to find a plastic resin that could meet both the durability and resiliency characteristics required of the upper and lower sections of the bottle. 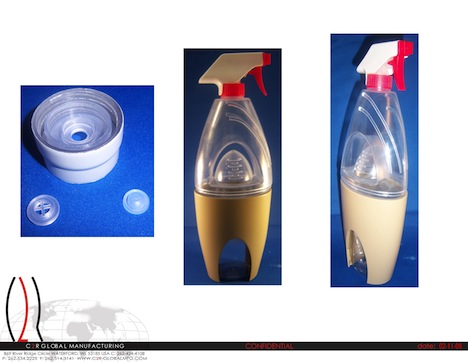 Little did I know how difficult it actually is to create a bottle that has two holes in it. A bottle has never been built this way. Replenish is really the first significant redesign of a spray bottle since Roger Drackett created the first Windex bottle in 1943. Creating Replenish came with two major challenges: perfecting the valve system and finding a manufacturing approach to accommodate the integrated design.

Perfecting the valve system presented a unique challenge. There were three physical properties we had to account for. First, the concentrated pods had to be easily squeezable. Secondly, the pods had to allow for proper vent-back; the valve had to allow air to flow back into the pod after concentrated was squeezed out such that the pods could retain their shape. Thirdly, the valve had to prevent the mixed solution in the top chamber of the bottle from leaking back into the concentrate pod. Our approach to addressing these three main challenges was simply trial and error. We built iteration after iteration of the concentrate pod and valve system until we found the perfect balance to meet these three properties.

Traditionally, plastic bottles are made with a blow-molding technique; however, to achieve the ultimate quality of the Replenish design, I had to use a more expensive injection molding technique. This made using PET materials very difficult and extremely risky. But MBDC and I knew that using any other material would reduce the recyclability of the platform as most communities in the United States can only recycle #1 PET or #2 HDPE. The decision was made to use PET and ultimately the team was able to accomplish something that had never been done before.

To add to the long-term durability of the platform, Replenish chose a recyclable spray head that contains no metal parts. The metal spring is normally the point of failure in a standard spray head and has been tested to exceed 10,000 trigger pulls.

Finally, what we strove for in the final stages of building Replenish was to transform a traditionally disposable household good into an integrated and visual appliance. Method shook up the cleaning goods industry by putting out a beautifully designed product. We also wanted to cultivate that visual consumer experience, but we wanted it to be about more than just looks—we wanted it to be about function. That's why the Replenish bottle aesthetic speaks so directly to its function, much like the kitchen appliances we so proudly keep out on display on our countertops. 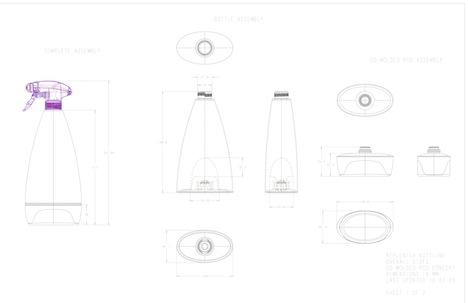 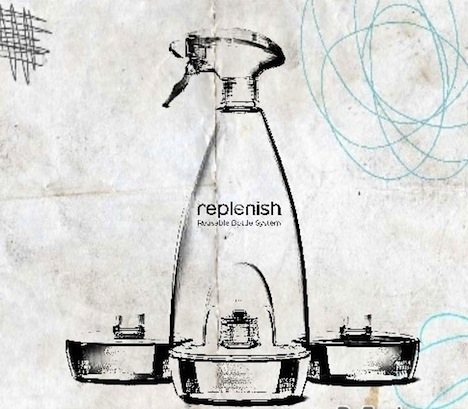 Working with MBDC opened up a broad new world of possibilities. After working so closely with Radius Product Development and Eastman Chemical, we were able to create a joint venture to explore the value of Replenish's new dispensing system for other consumer product companies. While the idea of concentrates and reduced packaging for refills is not new, the idea of reinventing the basic utility of the "bottle" is a radical departure from the last 50 years. The potential economic and environmental savings that could accrue if the Replenish dispensing system became the industry standard across multiple product categories ranging from cleaning to personal care could be enormous.

The most consumer- and environmentally-friendly innovations in this space will be in working towards eco-effectiveness—a more comprehensive approach to making a product do more good, rather than less bad. As declining sales of greener alternatives to conventional products can attest, simply making something greener does not meet the bottom line for the consumer.

Ultimately, consumers want to be more environmentally friendly, but you have to make it easy for them. This means delivering more value, attractive packaging, and a product that works better than what they used before. We believe we've done that with Replenish.