Bikes, Cars and Pedestrians at 28th & Park Ave: A Never-Ending Cycle of Near Misses 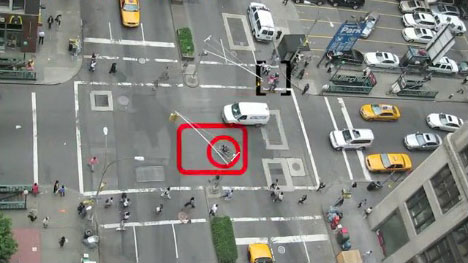 Every day three or four New Yorkers get hit by cars, either as pedestrians or as cyclists, and I've also seen cyclists crash into pedestrians. When you see the following video, you'll be amazed the number is as low as three or four. NYC-based Art Director Ron Gabriel trained a camera on the intersection of Park Avenue and 28th Street as a case study for his 3-Way Street campaign, which looks at how "pedestrians jaywalking, cyclists running red lights and motorists plowing through crosswalks" create quite the dysfunctional transit ecosystem:

Remember NACTO's Urban Bikeway Design Guide, which laid down guidelines for how bicycles, pedestrians and cars can and should interact in a city? Gabriel's video should be part of their package.