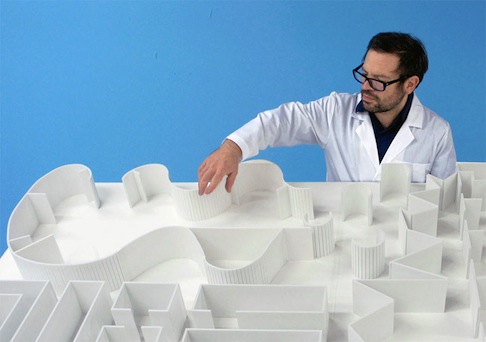 Brought to Brooklyn with the Guggenheim's support, Pedro Reyes' Sanatorium is a utopian clinic of topical treatments for those inner-city afflictions we are all too familiar with: stress, loneliness and hyper-stimulation.

The Mexican architect-turned-artist is best known for this action intellect, looking to develop projects steeped in public policy and social activism. He says "I have a mini manifesto which is 'old museums were fridges, new museums are ovens,' so I believe that an institution can be more the activator of a process than the recipient of a finite product."

Sanatorium is community in practice at its core value. At the downtown Brooklyn clinic, the converted commercial space gives off the florescent-lit starkness of a hospital further aided with a room full of white coat specialists. 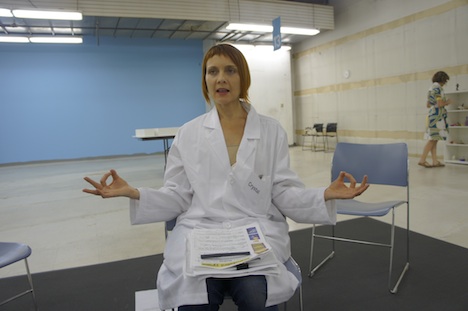 "The Department of Mudras" in Sanatorium by Pedro Reyes.

After your $15 admission, you are asked to state your personal conflict, something along the lines of 'what is your ailment?' The receptionist then develops a healing plan. I stated general anxieties over deadlines. And I was prescribed the following therapies: Ex-voto, "The Department of Mudras," and a group session called "The Tuning Effect" to recalibrate the senses. Traditionally, Ex-votos are votive offerings with a personal anecdote accompanied by a simple sketch. They are meant to be public and personal professions of faith and gracious thanks for favors received. Reyes intellectualizes the process in this way, "Sanatorium takes curatorial practice out of the system of art objects and into narratives of the self." It is here that an art therapist watercolors your confession. I titled mine "The Thread of Friendship" while others varied from "Quit Smoking" to train run-ins.

At the "Department of Mudras," I learned a few ancient Hindi hand gestures to start my workday off focused and energized. And the group therapy lead by Mel S. Kimura-Bucholtz was indeed mind clearing and depth perception changing.

The Sanatorium is a two-hour opportunity for unraveling the calloused New York facade. Through "therapy" here one gets to play and consider self. The cure is in the process, powered by what the individual is willing to give and unload. All 16 treatments are based on traditional methods of expression or respected forms of perception changing programming.

Reyes hopes to make this public installation roving and accessible to more people. He says "Every neighborhood should have a space of meaningful human encounters. I have already requested to replicate this in Mexico...So my hope is that this becomes a permanent service, a gift from the art world to the real world."