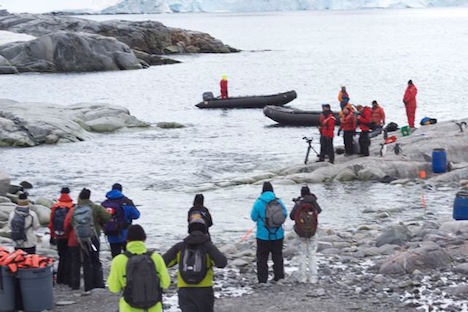 This is the second post in a series that shares design learnings from an expedition I took to Antarctica. The first post was a reflection of my initial thoughts upon arriving to the edge of a known world to embark towards the "new world" of Antarctica. The first lesson of the journey was to "Let Go." In this post, I focus on the challenges of starting with a clean slate.

In my short 28 years, I have observed that designers, by nature, explore new ways of thinking and offer solutions to human interactions. It is an iterative process and highly collaborative.

During three days of orientation for the 2011 Inspire Antarctica Expedition in Ushuaia, Argentina, I was able to grasp new team dynamics and how relationships were forged in a very short span of time. The distance between the tip of the Antarctic Peninsula and the tip of the American Continent, known as the Drake Passage, is roughly 600 miles. While it may seem quite large, it is a very tiny space for the entire Pacific and Atlantic Ocean to meet. The seas are very rough here and conditions change by the hour. 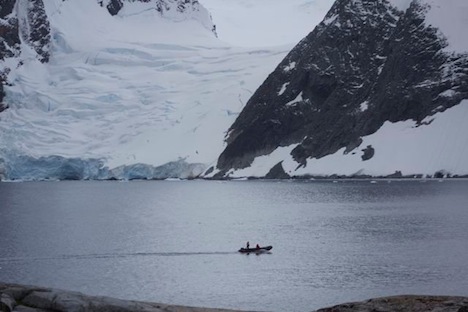 Going through the Drake Passage was similar to how I was taught to approach projects: come in with a fresh eye but bring your experience along. This is quite tricky to manage in real life. Approaching the expedition with a designer's mind of collaboration was challenging: In Antarctica my new best friends—and teammates for 14 days—were people who, 48 hours earlier, I didn't know.A basic premise is that we would all be living together: getting along for the next 14 days was paramount (you can't really just walk off of a cruise ship). It was equally important to understand that for all the participants of this expedition, traveling to Antarctica was not for "the thrill," to cross off a "the bucket list" item or just "to go." The expedition itself is organized in order for participants to understand that preservation is part of a life-long commitment.

The variety of ages and life experiences was something that I really liked: in my group of 80 people ages ranged from teenagers (which we fondly referred to as "Greenagers") to people over 60. You would have teams made up of energy executives right next to environmentalists sharing space with lobbyists or students from over two dozen countries. This was the multicultural fabric interwoven in the expedition—a place where curiosity and passion for the planet led us to the Drake Passage. 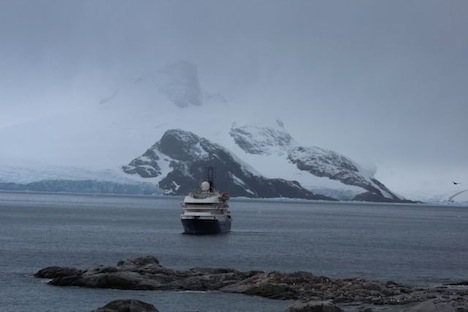 As a designer, it was quite interesting for me to see how teamwork was built from the start of the expedition. Yes, there was the traditional team introductions but it was unique to experience a short introduction directly impacting your day-to-day routine. The program was designed this way and the experience is something that I have carried away with me. The same group of people you met over dinner one night would be hiking to a glacier with you the next day at 6AM. The people you would meet would carry on to be part of cruise ship activities which included presentations on historic Antarctic explorers and ship to shore transports (called Zodiaks). As team building exercises were developed, the expedition activities were also designed to build leadership.

What I found over and over again was that Sir Robert Swan and the expedition team designed the experience in a way that provided quick insights into leadership styles by measuring one's ability to communicate effectively across cultures. We changed teams often so our leadership roles shifted quickly. The people you had breakfast with would be different from the group you sit next to in a safety briefing.

And this brought me to my first question: Why should teams remain static over multiple projects? Is it really a cost vs. benefit fight? OR is it more of a recognition of the corporate culture?

We were pulled into every activity by the thrill of understanding it as something new. Tasks included hiking together to Martial Glacier and assembling a camping tent in preparation for an overnight stay on the ice! By signing up for the expedition we were readily stepping out of our cocoon; why not try something entirely different? What could you loose by being someone you haven't been before? In my case this involved, hiking (in the cold) and camping (in Antarctica!). 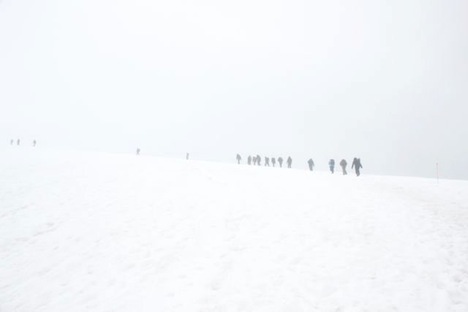 As designers, I think we should do more of this. We risk falling into roles because we are bound to an environment that is highly stable. The ship provided an hour by hour change in strategies, it forced me to rethink my approach and to do so quickly and with elegance.

I liked the journey because it accelerates this process. Not many companies are designing and thinking quickly enough to grasp the impact in humanity of exponential technologies, let alone climate change.

Please correct me if I am wrong, but I believe there are few examples of companies or teams that force themselves to constantly change, allowing the setting (read: geography) of their decision-making process instigate new ways of thinking. Could the team culture of corporations (possibly built unintentionally) lead to animosity, lack of commitment, crumbling loyalty and in essence, the end of a team or company by lack of leadership and design strategies?

Once you go through this process, it becomes a personal Drake Passage. There are big changes that might have the appearance of crippling your ability to move (well, in real life on your way to Antarctica, it really does for about 36 hours!) but in reality, it allowed us to be unbound. I came to understand these team-building exercises as setting the slate clean so we could understand the new networks that had formed and the culture we were building on the ship. This was a shared experience, not a service we had paid for or a product we got off the shelf. Now we were ready to collectively paint the canvas...