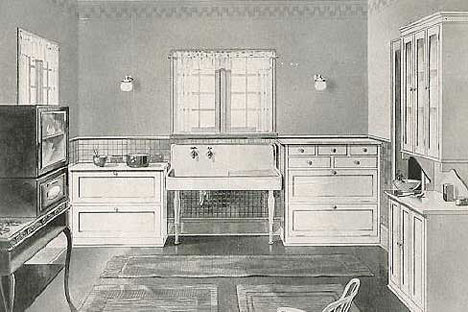 In 1869, Catharine Beecher's intelligent kitchen design from 1843 was reprinted in The American Woman's Home, co-written with sister Harriet Beecher Stowe, but still did not see mass uptake. A rational kitchen design based on ergonomics was not the kind of thing that could set America on fire. Electricity was, sometimes literally. When cities began installing electricity en masse around the turn of the 20th century, kitchens would change forever.

But before electricity there were other potent innovations, like gas and water. The widespread installation of running water in the 19th century provided a huge boon to kitchens, because now you had this big magical white thing that you could fill with water without having to carry a bucket to that well down by the Johnsons' house. Unsurprisingly, sinks became a focal point of the kitchen. They were also huge, heavy and difficult to move, which gave rise to the expression "Everything but the kitchen sink," meaning if you were going to clear out of your house and take everything you could carry or move, the cast-iron kitchen sink would not be one of those things. 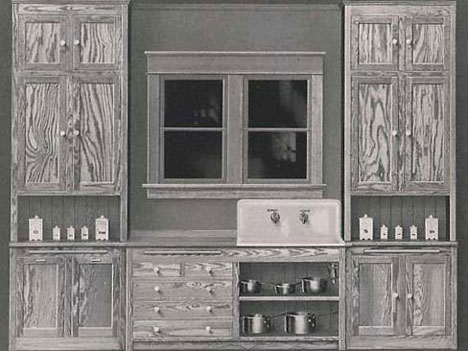 The laying of gas pipes in the same century also altered the kitchen experience. It provided lighting via lamp and heat on demand, as well as the occasional violent explosion that killed everyone on the third floor and gave the neighbors something to talk about. 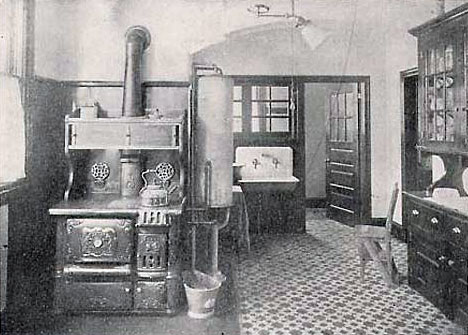 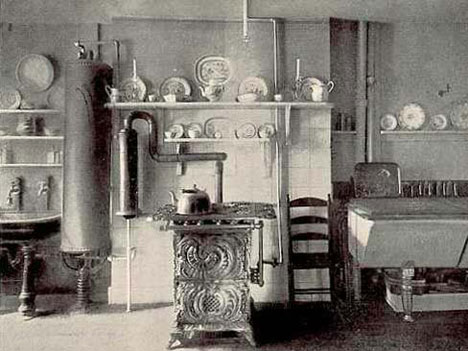 Despite these piecemeal innovations in the kitchen experience, aesthetics was still largely a matter left to individual consumers. Maybe you ordered all of your kitchen furniture out of the Sears catalog and it was the same height. Maybe Mrs. Brown had a good eye for proportion and Mr. Brown had enough scratch to hire a carpenter to knock up counters that were the same height as the sinks. But the fact remained that aesthetics and an overall concept of kitchen design was likely a last priority to those preoccupied with getting food into that kitchen in the first place.

The seeds of kitchen design were, however, beginning to sprout in the late 1800s. It would be advanced by two Fredericks in America and a Friedemir in Germany. A girl named Christine McGaffey, later married and named Christine Frederick, was born in 1887. She would later read Beecher's treatise with great interest. Around the time of Christine's birth, a mechanical engineer named Frederick Taylor was working in a factory and getting to know machinery. And in 1892, over in Germany, a guy named Friedemir Poggenpohl was starting up a company that was going to build kitchens.

Stay tuned for Part 3 to see how these things begin to tie together or catchup on Part 1: Pre-Standardization!