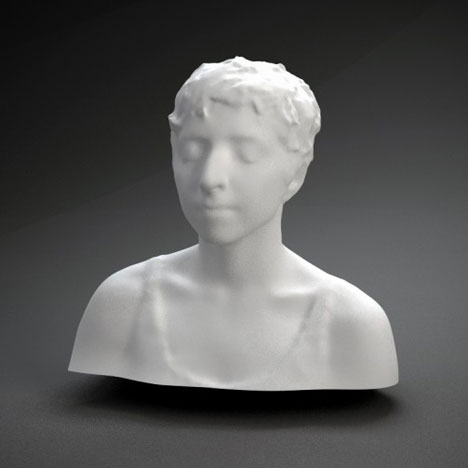 Becky Stern makes objects, for one thing, with unusual properties that occasionally make them difficult to classify. Her silver "Firefox" necklace is straightforward, but her "Laptop Compubody Sock" is decidedly not. Her Vicodin-pill-holding "In Case of Emergency" rings, earrings and necklace could be reasonably classified as jewelry, or maybe Medical Jewelry, but her "TV-B-Gone" Jacket isn't really mere clothing when it can shut off nearby television sets (at a bar or a Best Buy, for instance) by sliding the zipper. 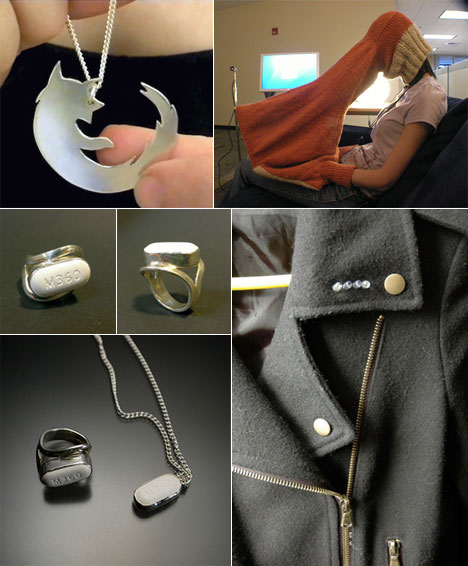 Then there's the "Cell Phone Ski Mask", the tablecloth made out of artificial sweetener packages, her Tron-ified knee brace adorned with electroluminscent wiring. And when I ask her about her persistent knee injuries, she pulls out a stuffed animal, only it's not a stuffed animal: It's an articulating plush model of her actual knee, complete with cartilage, ligaments and dislocating action, based on arthroscopy images and MRIs (the latter of which she also, by the way, embroidered).

She makes these things in her tidy apartment/studio in Brooklyn, by hand tool, sewing machine, power tool, soldering iron. When I stop by to visit, a jewelry tumbler is running in the background. Like her creative capacities, Stern's tools don't belong to one discipline, and she displays the classic mark of a multicreative: When you ask them the cocktail-party-standard "So what do you do?" they can't just spit out "Patent Attorney," "Yoga Instructor," "Production Designer." They have to think about it.

"That's exactly the relevant question," I say, curious to see how she'll run with it."The relevant question is how they interrelate—Okay, well, I am a video producer for Make, I do video production about 'how to' stuff," she says. "So, I am a tutorial maker, you could say. I'm also an artist." I'll truncate her answer there to address the second thing Stern makes: Instructional videos of both her own projects and the projects of others, revealing to internet surfers worldwide exactly how you cobble weird, wonderful things together from raw and not-so-raw materials.

Your typical artist makes things in their studio and displays them in a gallery. Once in a while you get to witness process as part of a documentary. But everything Stern makes is documented step-by-step, not just for posterity, but for replication. The process is not concealed, it's broadcast. It's like a sideways definition of mass production where after the initial creation, production is outsourced to the masses. The original creator becomes a broadcaster, and the consumer becomes an emulating creator.

In the videos the projects, backgrounds and even Stern's physical appearance change, but the one constant is that she's always making something unusual. "I have been doing a tutorial video [roughly] once a month for [roughly] the last four years," Stern explains. "My hair gets longer, my hair gets shorter; I gain weight and I lose weight, and I move from Arizona to New York." And once archived, the videos are not like forgotten books, sitting on a back-room shelf gathering dust: "I don't mind doing projects over," she says. "Sometimes if a project didn't come out right three years ago when I did it, I will do it again. And I have a better camera now, better lighting and I am better at video editing so the new video will be super snappy. "

Stern's tutorials, vieweable here and here, show how her projects and the projects of others are made.

The larger question is how Becky Stern was made.

Stern was raised in Connecticut, the daughter of a newspaper editor father and recreation coordinator mother, both avid DIYers. "I grew up in a household where it was like, 'We can just do this thing, or make that thing,' or whatever. My parents always had a construction project going on: They re-did both of the bathrooms, the kitchen, they added a two-story addition." Make-it-yourself was not some value impressed upon her in childhood during meaningful lectures; it was so perennial that the ethic was fused into her being. "I learned how to cook, craft and swing a framing hammer from them," she says. "I've been making things forever, I don't really know any other way to be."

She did crafting as a child, was taught to knit, and received a sewing machine for her 13th birthday. While most kids have to learn to use a tool and then develop concepts around what that tool is capable of making, Stern needed a tool that could catch up to her rapidly-developing spatial perception. "[With the sewing machine] I immediately started knocking off Beanie Babies," says Stern. She holds out her left and right hands in turn: "I was like 'Here is the duck...here is my duck.' My mother was like, 'How did you make that in three dimensions?' and I was like, 'I don't know, I just figured out what the pattern pieces are supposed to be shaped like.'"

Even earlier that that, around age five or six, Stern had made her first video. "My parents were putting up this addition and they needed all of the extra adult power to put up the big framing wall of the top floor," she says. They wanted the moment captured on video, and available-to-help but too-small-to-lift Becky was pressed into service, working a giant-to-her VHS camcorder. "There's video of the sky and the ground, and my mom's voice saying 'Okay, now hold the camera like this, point it at this thing, okay.' And then she runs over to the others and they put up the wall." Stern laughs at the suggestion that that was her first video tutorial. "I mean, it was video of a bird's nest we found, and then the house going up, and then my mother comes back and gets the camera from me."

When it came time to pick a college, Stern followed her skills, even if her skillset did not neatly correlate with job training for a career path that would satisfy her. "I thought I wanted to maybe be a fashion designer, because I liked designing and I liked sewing," she says, explaining why she enrolled in Parsons School of Design. "But I didn't really like fashion that much in terms of the culture and the way creative things get treated in the fashion world."

Stern gravitated towards Parsons' Design & Technology program, a rather geek-oriented left turn away from what the average fashion design student was after. "It's mostly an MFA program but at the time they had a small number of undergraduates taking it, so it felt like grad school," she explains. "It was a really super-awesome environment to be around - smart people, cool electives."

One of the classes she took was "Making Wireless Toys," where she picked up electronics. "I was like, oh cool, lights—I get this, I'm good at physics. And now I can handle electricity and make little blinky things," she recalls. "I started putting lights in plush toys, sewing and doing electronics together; it just seemed like the right fit."

Unsurprisingly, the obvious choice of making a stuffed animal with parts that light up would be too pedestrian for Stern. "I made a plush nightlight that was a steak," she remembers. "Because I was reading Michael Pollan's writing about industrial agriculture and irradiating meat, and wouldn't it be funny if you had a glowing steak."

After graduating from Parsons, Stern still wasn't sure where her skills were applicable. So she climbed another rung on the academic ladder, gaining acceptance to a PhD program in Arts, Media and Engineering at Arizona State University. "I thought it was going to be super cool—it was pretty cool, I could make some fun things, but then it was too much writing and conferences and bullshit."

At ASU she also ran into problems with her adviser. "At the time I started writing for Make, on the blog, just kind of casually," she says. Stern had been fastidiously documenting the creation of each project she worked on and submitting them to Make, where they caught the eye of then-Senior-Editor Phil Torrone, who offered her a blogging gig. "My adviser didn't like it. She was like 'What is that silly thing you do on Make?' I was like Actually I think it is really important—and I think it's important that you think it's important, too—so screw you. It just became not fun and I wanted to make more stuff."

She defected to the Sculpture department, where she could continue to use her hands. She picked up welding and was on her way to earning an MFA in Sculpture. Then the economy tanked, creating a budget crisis at ASU that necessitated changes to their pricing structure. The PhD research program Stern was initially enrolled in there had been funded, but the MFA program got more expensive. The program itself was fun, but Stern made a tough decision. "I told myself 'I'm not going into debt for grad school,'" she says, explaining her decision to quit the program. "And at the same time I was working more and more for Make, and now Craft, and so I just flipped into a full-time role there. I dropped out of grad school and moved back to New York."

Which is where she is now.

But until then, check out Becky Stern's picks for our Ultimate Gift Guide: Tools for Summer Making!