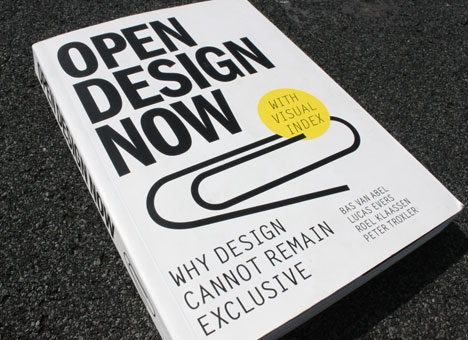 In my personal book collection, I've had a history of underlining, dog-earing and otherwise "marking up" my copy, complete with page citations and summaries of important details on the inside cover. Since I do actually lend my books out, often with my notes, my lending library, has, in a sense been Openly Designed, and in the few circumstances, the readers have left notes of their own. As a reviewer, however, there has always been a drive to photograph the book in a pristine form, so I've tended towards keeping looseleaf sheets of paper with my notes, often on the backside of the PR fluff that tends to come with them. For Open Design Now, the introductory letter was rather brief, not too fluffy, and after I got through with it, was annotated with words like "YESSS," so we will confess some mild bias toward the topic before we even opened the cover.

To further the interests of open source, I'll include my notes in the photo gallery for this particular work, but it might also be worth observing that my notes filled not only the back of the PR letter, but also the unintelligible Dutch invoice and two other sheets of paper as well. We have never reviewed a book this rich in content and new ideas. Of course, Open isn't the work of one author either. Instead, it includes articles by and interviews with design luminaries such as Joris Larman, collectives like Droog, manufacturing pioneers Bre Pettis, open design commentators and lawyers that we promise you haven't heard of but will be thankful to read. Part way through Open I had a conversation with my patent attorney cousin, and by the mid-point of the book, I emailed her a photo of the cover to tell her it was required reading. We hesitate to say that books like Open Design Now are required reading for industrial designers, but if you consider yourself a maker or a tinkerer in any way at all, and plan to be working for the next decade or two, the concepts described within will likely affect your career and your life whether you read it or not. 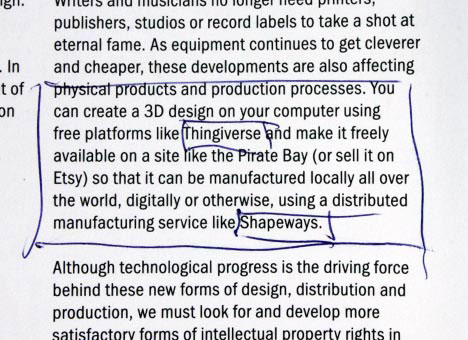 Predictably (and respectably), the first words of the book, on the inner cover flap describe the Creative Commons status of the book , under which it is not copyrighted, per se, but instead licensed, and anyone can share the book as long as they attribute it, do not profit from it, and if you build upon it you must share it too ("share alike"). After a brief introduction, the book is organized into three sections: Articles, Cases and Visual Index. The Visual Index is bright yellow, and includes nearly all of the images in the book. When reading through the articles, little yellow boxes with terms like "Hacking" and "DIY" pop up sporadically. Each of those boxes refers back to the visual index, which is alphabetized, although the visual index is certainly lovely to peruse on its own merit. 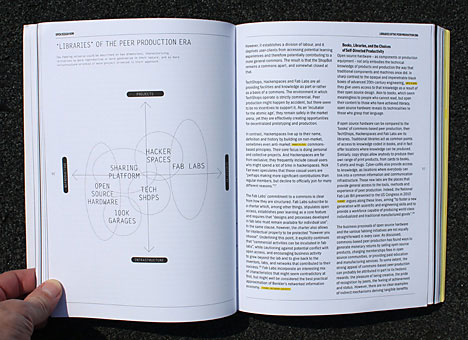 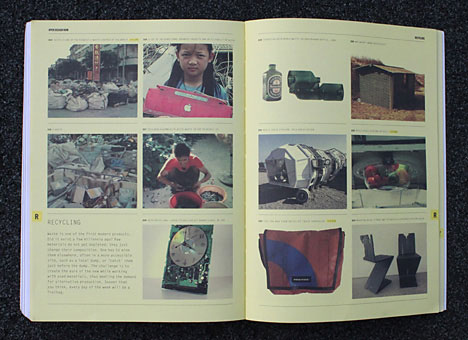 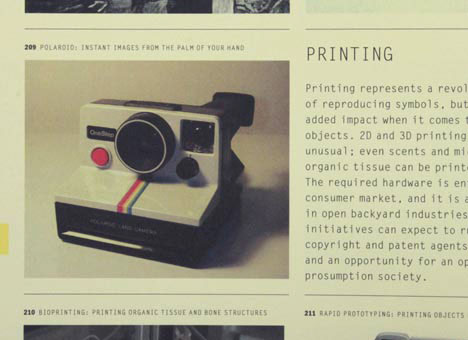 The articles comprise the bulk of the book. The contributors are all over the map, distilling rather complex systemic ideas into 3-10 page articles, and name dropping all the way (e.g. Copyleft, Fritzing, Arduino, WikiKEA, OpenSCAD, RepRap, SparkFun, FabLab), so there's a lot to chew on. Layer on top of that the complexity of economic terms (e.g. free rider problem, problem of the commons, paradox of choice) and legalese or patent law distinctions and acronyms (e.g. GPL vs. BSD) and we'd guess that Open contains enough macro concepts that the typical reader might need time to research and absorb the depths of the content within between chapters. Thankfully, there's already a crowdsourced tool for that, the Internet.

The Internet has served to let software propagate, multiply and grow based on network effects, but virtually any object can be reduced to bits of data, and respawned somewhere else. Although we're quite far from Star Trek's "Transporter" (i.e. teleporter) we can already tele-duplicate many plastic forms using 3D printing, nearly anything using CNC routers and flatcut objects with minimal user assembly. The future will only take us in that direction faster. As that happens, however, barriers to entry will begin to fall. The licenses that dictate much commercial software (as well as movies, music, code, or even chemical formulas) rely increasingly on legal constructs, as the data, object or molecule becomes easier and easier to duplicate. 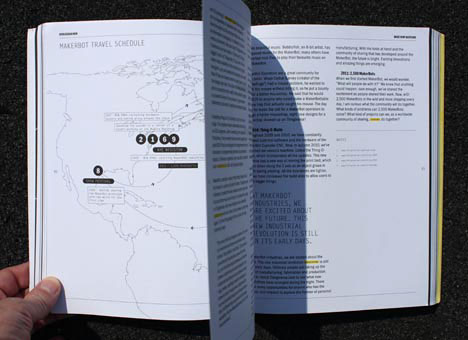 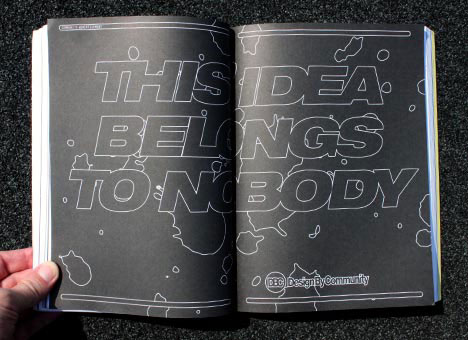 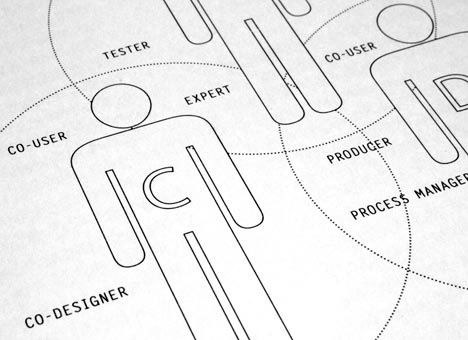 Just as Warner Music and now Warner Brothers are confronting the problems with falling barriers to entry, manufacturing and production are soon to follow. According to Ronan Kadushin, "Copyright gives you the big guns, but can you afford the ammunition? You can register your intellectual property, but you don't usually have the money to defend it." True, especially for the little guy. Instead, many in America are becoming increasingly alarmed that the system appears to be stacked against them. Corporate stakeholders have lobbied and altered our legal framework to the point where the patent system has become too expensive for most lone inventors and some corporations use patent law and their retained lawyers as a blunt instrument against competition that they perceive as stepping on their feet. 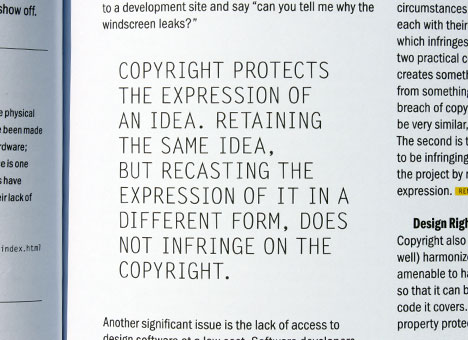 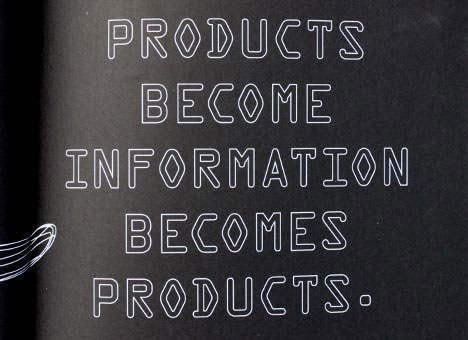 At the same time, the growth of the network is creating a burst of ideas and knowledge that threatens to overwhelm the patent system, which already has multi-year waiting times in this country and far longer in others. Thomas Jefferson once said "that ideas should freely spread from one to another across the globe, for the moral and mutual instruction of man, and improvement of his condition ... like fire, expansible over all space, without lessening their density in any point, and like the air in which we breathe, move and have our physical being, incapable of confinement or exclusive appropriation. Inventions then cannot, in nature, be a subject of property."

Jefferson is unquestionably right that ideas want to be free, as is sometimes quipped. Human nature, however, also seems to want to own, to succeed, to accumulate wealth. For some, that human nature also wants to steal, but for nearly all, life is a non-zero sum game. We succeed not because we fight for things, but despite it. New research into evolution and neuroscience continues to confirm that as a species, we have been defined by cooperation. The new network tools for cooperation, duplication and proliferation are innumerable. Just as it did when Napster arose, human nature determined human behavior, until governmental forces intervened (principally by way of corporate pressure). In that industry revenue has shifted from CD sales (now obsolete) to cheaper digital downloads and higher concert prices. From the standpoint of Metallica, where Lars Ulrich spent his royalty checks on Basquiat paintings, the loss of revenue was "unfair." The hard touring members of Anvil may disagree. In that era, the A&D guys at Arista were the tastemakers and artists toured relentlessly in the hopes that they might get "picked up" and could expect bonanza revenues once they hit MTV and sold CDs. Then they could slack on touring while letting their label push their music through the pipeline. That consolidation of taste culminated with Clear Channel Communications and the homogenization of American radio. That age is gone for music, fortunately, so if you happen to differ, well, check your iPod. As design goes digital, product designers will soon face the same challenges music faced and is facing now. Open Design Now argues that those challenges might just be opportunities.