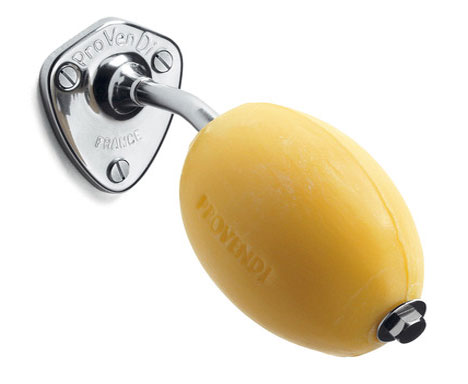 It looks pretty bizarre, but this idea for wall-mounted soap was apparently once in widespread usage, at least in France. "This was patented in 1950 and used widely in schools, public buildings and by France's state-run railways," writes the retailer. "The manufacturers claim you can wash your hands 1,000 times with a 300 g tablet of this pure vegetable soap."

- If mounted over the sink to drip-dry, it would eliminate the need to have to constantly drain a soap dish. - Losing the soap dish also means the bar isn't constantly sitting in a puddle of its own filth and getting all mealy at the point of contact. - Suburbanites with room won't care, but this would actually free up some sinktop space. (The sink in my NYC bathroom is about the size of the one in an airplane bathroom.)

- They couldn't use a thumbscrew and it's held on with a hex nut? What, I'm supposed to get a socket wrench every time I've got to put a new bar on? - I'd have to keep buying these special soap bars from the same manufacturer. 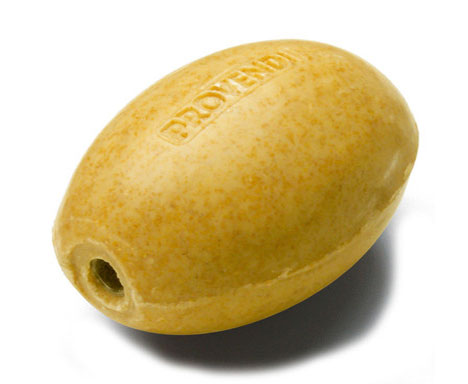 Actually, strike that last point, I'd probably try to build a jig that perfectly fits a bar of Irish Spring so I could bore the thing out with a Makita.One question I have about it is, what happens when you get towards the end of the bar? Do you think it cleanly wears away right down to bare metal, or do you think it eventually gets so thin that there's a structural failure and it breaks off in two slivers?

Anyways, anonymous French designer from 60 years ago, I applaud you for thinking outside of the box. I know you probably didn't see liquid soap and wall-mounted dispensers coming, and if it wasn't for those, I'd probably go with your system. Plus then I'd get to make a cool soap bar jig.