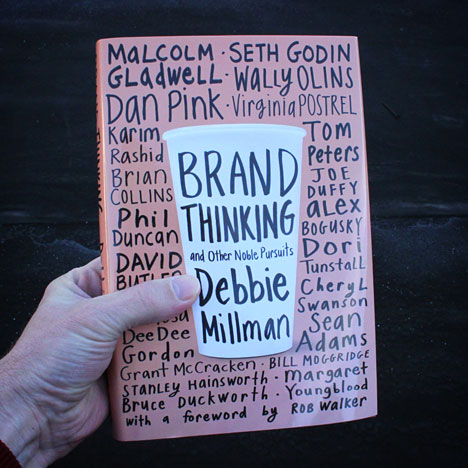 Having read Naomi Klein's No Logo several years ago and been stirred by her central thesis, we were cautious about Debbie Millman's Brand Thinking, but it didn't take long before we realized that the subtitle "and Other Noble Pursuits" was rather tongue-in-cheek. When Millman says "brand thinking," she means thinking, but she doesn't give the same weight to "noble." Capturing interviews with the likes of Grant McCracken and Malcolm Gladwell while getting Karim Rashid to admit that he was embarrassed by some of his older designs for preposterously expensive couches, Brand Thinking encapsulates the conflict inherent in branding today.

These aren't easy questions. What is a brand, and what does it mean? Millman points out that the first brand as a trademark was Bass Ale, according to the 1876 UK Trademark Act. Bass happens to taste fantastic (IMHO) but it also sells at a premium. Buying a Bass "says" something about the buyer (e.g. you're not a teetotaler, but also not likely a Nascar fan). At the same time, the origin of the Louis Vuitton "LV" logo pattern was created based upon Victorian Orientalism, but was ultimately patented and succeeded at avoiding counterfeiting as well. Now Louis Vuitton has moved from painstakingly crafted leather trunks to being a small part of the megalithic LVMH it has drastically reduced quality in favor of quarterly profits. LV "branded" counterfeit products can be found at fractional prices from Canal Street to Shanghai, where the projection of brand identity has become paramount to the underpinning quality. We wonder though, once quality ceases to define a brand, what fills the void? 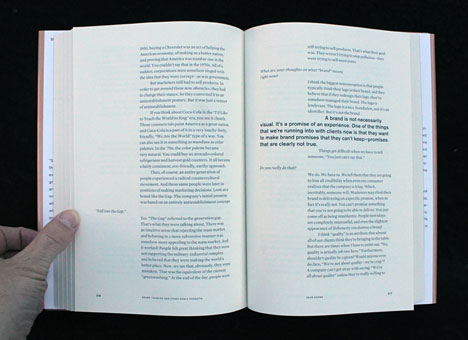 The British "chav" subculture has pursued brands to the point that Burberry plaid "became" their identity, not the other way around. Cristal champagne was wholly embraced by hip-hop culture, until a brand director quipped "We can't forbid people from buying it" and yet that's precisely what many luxury brands do with their pricepoints. The looming trouble for many of these brands, however, is that modern technology makes superficially luxurious products more affordable. Dana Thomas's Deluxe presented a detailed chronology of the devaluation of brand in world culture and examines directly what Millman ascertains in interviews. Nancy Ectoff's Survival of the Prettiest took Thorstein Veblen's Theory of the Leisure Class to its logical conclusion, explaining that wasteful adornment that took thousands of man-hours to make connotes social status. The question of what brand means in the modern era of mass production is far more ineffable. Every day, how we adorn ourselves makes a statement about the sort of person we are.

Even more amazingly, though, brands are shaping our culture. In interviewing Grant McCracken, Millman reveals not only that the Coke bottle is an iconic shape, but also that Coke's Christmas campaigns gradually changed jolly old St. Nicholas from a green-attired woodsman to the red and white "Santa Claus" of today. Red and white are the colors of Coke. What does that say about Coke? More troubling, what does that say about us? 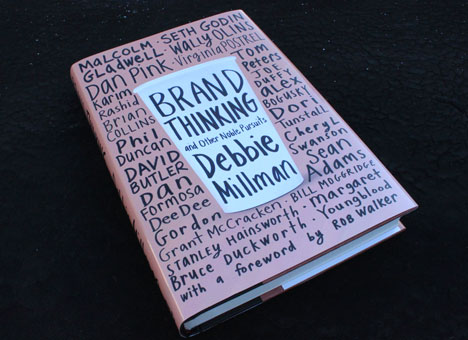 Not one to take the question lightly, Millman directly interviews David Butler of Coca-Cola, the very successor of the branding engine used to transform old St. Nick. Butler observes, rightly, that the reason that Coke has succeeded as a brand is consistency and quality. After the failure of "New Coke," the taste profile is sacrosanct. Setting aside the ethics of selling sugar water to children, the brand itself is unassailable. A brand director for Coke has a very different job than, say, the one for a fledgling fashion label: Coke is not supposed to change, but Prada (and Apple) "need" to come out with new items each year.

Millman's interviewing style is, as always, sparse, capable and insightful. She provides ample room for her subjects to speak freely, only interjecting to continue the dialogue rather than demonstrate her personal knowledge. The interviewees are remarkably self-aware. In her previous book of interviews How to Think Like a Great Graphic Designer, we noticed that designers with varied portfolios tend to be satisfied while record sleeve designers (possibly stuck in the 70s or 80s) seemed unhappy with the current order of things. This time around, her interviews with design thinkers and consultants provide an awareness of branding as selling an aspirational notion of the person one might like to be. Wally Olins observes that in the airplane industry, the planes don't differentiate the airlines, but the service does. Consequently, the users of a particular service brand will exhibit particular behaviors. 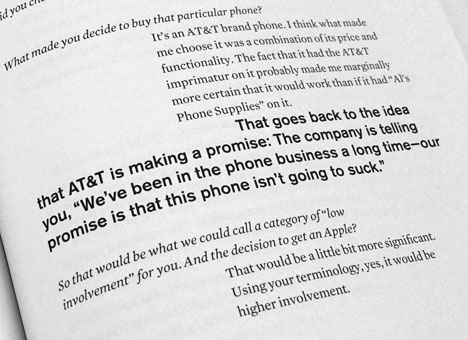 Olins is the first interview in the book and he's the first of many to use the term "tribe." Each brand carefully cultivates its own tribe, but as the Chavs demonstrated with Burberry, consumers as a mass can exert more influence than any one brand strategist. Even less surprising is the lesson of Cristal, which is that after a brand identity is appropriated by an unintended constituency, choosing to disassociate oneself from the people who are buying your product is never a good idea.

Most of the interview subjects express similar sentiments: they speak freely about how the modern consumer is more attuned to advertising than they were in the 50s and 60s. The modern show Mad Men ran ads for real products (e.g. Unilever's Dove which is also mentioned in Brand Thinking) during their commercial breaks in meta-ads that indirectly skewered the branding process by framing them through the advertising lens of 1964. In an era where PBR can become a brand simply by not trying to appeal to the consumer, what place remains for branding? In her interview with style observer Virginia Postrel, Millman observes that "it seems like the whole notion of consciously making something cool would immediately disqualify it from being cool," and that, in a nutshell, is the dichotomy facing brand thinkers today. Brand Thinking provides lots of insight into the conflicts inherent in the job, but gives little resolution as to how someone tasked with the job of making an old brand "cool" should proceed. One has to be able to embrace paradox to design identity for brands that extends beyond the capability of their products. That does not, however, mean that there is no place for the branding engines behind Juicy Couture or Affliction, nor that the roles taken by Us Magazine in trumpeting which styles the stars wore to what gala events will no longer drive sales. For the unruddered masses who have yet to establish a personal identity, a brand can serve as a shortcut, a signpost to a life they don't yet have. 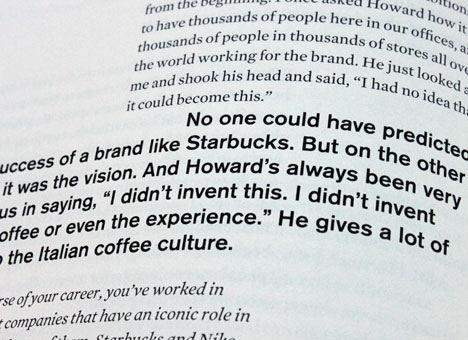 Nevertheless, in the long run, those who appropriate brand cues from their icons rather than style or behavioral clues are bound to fail. The brand of jacket that Sid Vicious wore at the dawn of punk has been long forgotten, just as James Bond's tailor varies from film to film. What the gentlemen did, attired thusly, both remain very different lifestyle icons for very different tribes. Unsurprisingly, the tattered concert t-shirt that intersected with a visceral memory of a user experience was almost certain to be more meaningful than the particular manufacturer of said shirt, or the brand of the shoes in contact with the venue floor (and its requisite beer and filth).

In his 1979 book Distinction, Pierre Bourdieu assessed taste across a wide range of class distinctions in France. The only universal quality that he could find was that in the "house on fire" thought experiment; nearly all participants chose something resonant to rescue; a bit of their history, manifested in object form. For me, I'd take a piece of shrapnel that missed my father's head by inches in Vietnam. No thief would ever think of stealing that and no style maven could ever push that jagged element of my very personal life into the lives of the readership of Us Weekly or Hello magazine. Doubtless the Core77 readership has similar items in their own home. The unanswered question in Millman's book is why we allow ourselves to spend so much time and money on the things that brand strategists push into our lives rather than ushering objects of real personal meaning by living a varied life instead. We're sure it would be a brand strategist's dream to work for a company that relentlessly pursued quality over all else and set its own guideposts based upon criteria other than quarterly profits, but we're guessing they don't pay so well. 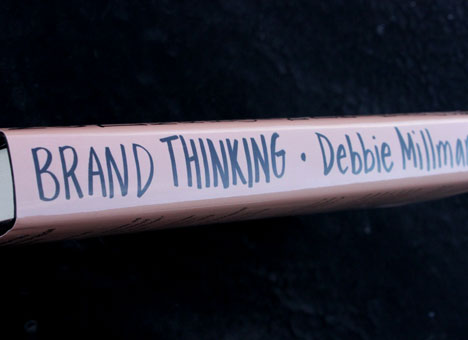