Japanese vs. US Uptake of Uniforms, the Issey Miyake Apple Vest that Wasn't, and the Black Turtleneck that Was 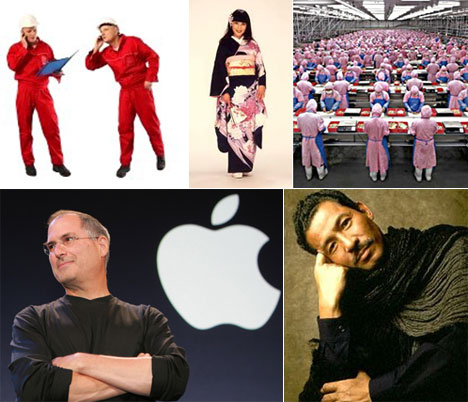 During a year of living in Japan, one thing this American was struck by was the Japanese willingness to wear uniforms. At my corporate job in New York, we had semi-annual evacuation drills where certain appointed Floor Safety Leaders—really just Alan from Marketing or Susan from Accounts—had to don hardhats and orange safety vests, earning them gentle ribbings throughout the procedure. During my time at a Japanese Board of Education, the stern-faced office salarymen would show up for earthquake disaster drills in their assigned uniforms of knee-high jack boots, jodhpurs and safety vests. They looked completely ridiculous, but no one batted an eye.

If an American walks into a 7-11 wearing a colonial-period uniform, you'd assume there was a Revolutionary War enactment going on nearby. But during Japanese holidays, in any public space you'd see the regularly-dressed mingling with people kitted out in kimono, with nary an eyebrow being raised.

Someone who discovered that American individuality does not lend itself well to uniforms—outside of fast-food chains and factories, anyway—was, interestingly enough, Steve Jobs. In a fascinating excerpt from his forthcoming biography (just one more week, folks!) author Walter Isaacson gave Gawker the skinny on why Jobs always wore a black turtleneck and Levis:

On a trip to Japan in the early 1980s, Jobs asked Sony's chairman Akio Morita why everyone in the company's factories wore uniforms. He told Jobs that after the war, no one had any clothes, and companies like Sony had to give their workers something to wear each day. Over the years, the uniforms developed their own signature styles, especially at companies such as Sony, and it became a way of bonding workers to the company. "I decided that I wanted that type of bonding for Apple," Jobs recalled.

Sony, with its appreciation for style, had gotten the famous designer Issey Miyake to create its uniform. It was a jacket made of rip-stop nylon with sleeves that could unzip to make it a vest. So Jobs called Issey Miyake and asked him to design a vest for Apple, Jobs recalled, "I came back with some samples and told everyone it would great if we would all wear these vests. Oh man, did I get booed off the stage. Everybody hated the idea."

In the process, however, he became friends with Miyake and would visit him regularly. He also came to like the idea of having a uniform for himself, both because of its daily convenience (the rationale he claimed) and its ability to convey a signature style. "So I asked Issey to make me some of his black turtlenecks that I liked, and he made me like a hundred of them." Jobs noticed my surprise when he told this story, so he showed them stacked up in the closet. "That's what I wear," he said. "I have enough to last for the rest of my life."