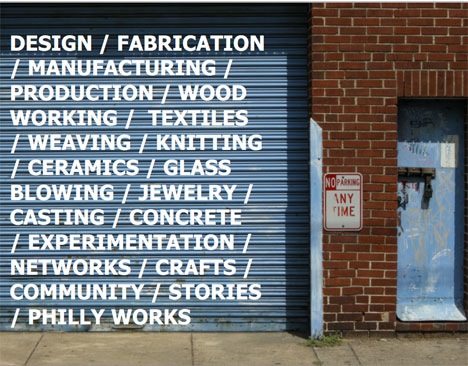 DesignPhiladelphia is rolling along here in Philadelphia. On Tuesday evening, Philly Works—now in its third year—invited three professionals to speak and participate in a panel discussion around the topic of "quality of life" at the Philadelphia Art Alliance, kicking off something a little bit different this time around.

Philly Works hosts an annual event occurring during DesignPhiladelphia that aims to highlight the thriving communities in design, craft and production in Philadelphia—often paying homage to Philadelphia's history as being a highly productive and creative hub; "the workshop of the world." Philly Works, in past years, has celebrated Philly's makers by showcasing local products—from furniture to clothing, from housewares to motorcycles—alongside images of workspaces throughout the community to give viewers a glimpse into where and how the products were made. 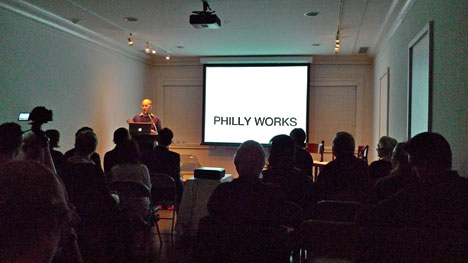 After two successful exhibitions, Philly Works coordinators Will McHale and Alexandra Schmidt-Ullrich decided to take a drastic shift for this years DesignPhiladelphia event. "The last two years we had large design exhibits with things. It was wonderful and it was a lot of work for 10-days during DesignPhiladelphia. Last year we actually made a catalogue," says Alexandra. "But we realized that while it was great while we did it, eventually we needed to move on. We were showcasing local Philadelphia artisans, fabricators, makers, designers' architects and what they were doing, but it was starting to repeat itself. So we thought, why don't we take these amazing minds—people with all of these amazing skills—and start letting them work together." This next phase of Philly Works will be two-years in the making. This year, all Philly Works events during DesignPhiladelphia will be forums to get people to meet and start a collaborative process. "Hopefully this is a project that will engage the community and a lot of different participants with a lot of different skillsets that can potentially create new work and ideas," says Will McHale. Under the topic of "quality of life," Philly Works is asking everybody and everybody in Philadelphia to participate, whether you're an artist, writer or opera singer. "The idea is very much that design is a process; something everybody can engage in. Not about the end result; it's about getting there."

McHale also explains that it's about people "getting outside of their comfort zone, bringing their skills to the table, and hopefully interacting with other people with complimentary skills to do projects they wouldn't be capable of on their own." And it's not all about the mushy-gushy side of collaboration, either. "There will be failures," says McHale. "So its actually also looking at these failures and how collaborations from different types of people trying to work together can work better"

The results of the Philly Works collaborations—whether physical objects or ideas—will be part of a three-month exhibit at the Philadelphia Art Alliance during DesignPhiladelphia in 2012. Along with the work, they plan to feature some documentary aspects of the projects, documenting the collaborations through film and video.

If you're in Philadelphia and would like to participate, visit Philly Works and view the catalogue here.