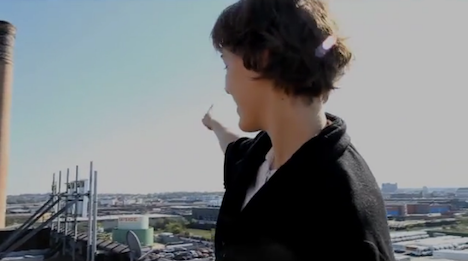 The United States is proud of its commitment to competitive markets as efficient ways of organizing society. But as we all know—from every time we catch a flight, or go to the doctor, or try to negotiate a new wireless or wifi contract—the United States is far from efficient, let alone filled with elegant human-centered experiences. This is especially the case in larger-scale or infrastructure-related contexts, like much of city-life.

This is also not a new complaint about the United States. King C. Gillette, before and after designing a way of shaving that required less skill (but that could only be affordable if disposable), was fed up with the inefficiencies that he felt arose from competition. The response he worked on tirelessly throughout the end of the 19th Century into the first decades of the 20th Century, pitching the idea to President Roosevelt and Henry Ford as well as the general public, was the establishment of a People's World Corporation, a single company that would build the one metropolis needed to house the entire US population in identical towers of serviced apartments near its hydro-electric power-source, Niagara Falls. 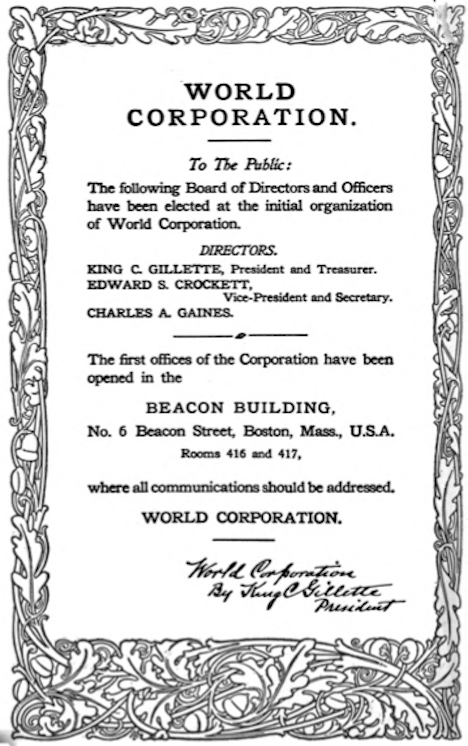 Perhaps our current problem is that we live in failed attempts to realize Gillette's ambiguous utopian designs. Our cities comprise dense apartments poorly serviced by pseudo-monopolies. And perhaps this is why our current faith seems to be now on the opposite kind of design: not the modernist total design, but evolutionarily aggregated micro-designs.

For example, consider the number of attempts to 'crowd-source' city redesign just this year in New York City alone:

A. is for Amplifying Creative Communities A Rockefeller Foundation funded 2-year project of the Parsons DESIS Lab [of which I am contributing researcher] exploring sustainable social innovations by communities around New York City, and how design could make those innovations more robust and more widely adopted.

B. is for By the City/For the City A competition and festival produced by the Institute for Urban Design (also in part funded by Rockefeller Foundation) that solicited public ideas for improving public space in New York City.

C. is for Change by Us A platform initially developed for the Bloomberg Administration in New York City by Local Projects, resourced by CEOs for Cities and the Rockefeller Foundation (the contemporary heirs to Gillette's social vision?) that allows citizens to identify urban betterment needs that the platform then connects with appropriate government agencies and community groups.

These are, in addition to already existing platforms for co-re-designing cities, such as ioby.org (crowd resourcing platform for environmental improvement projects [I am on their Board]), kickstarter (here's their page on urban redesign projects put together by the World Resources Institute), and openideo.com.

Stepping back to overview all this, it would appear that our urban problem is not lack of ideas. In a way that King C. Gillette would recognize, there is almost frustrating redundancy in not only what people think should be done, but places in which they can express these desires. The issue is rather how to realize all these ideas, or even just some of the good ones.

Compared to the first year of the Amplifying Creative Communities project, which took place in the Lower East Side, this second year's exhibition pays more attention to the stories of individuals who are fighting to materialize their innovations in Northwest Brooklyn (neighborhoods that include Greenpoint, Williamsburg and Bushwick). As Lara Penin, Assistant Professor of Transdisciplinary Design at Parsons the New School for Design and Co-curator of the exhibition and its workshops this November, notes, the narratives of heroically creative people, if you can find and capture them, are inspirational, and more appropriate to the United States' approach to social innovation.

What emerges from these stories is a rich picture of what it means to attempt change in dense urban contexts. They provide lessons for what a networked approach to social change demands, as opposed to Gillette's total designs and the competitive market's nondesigns:

There are lots of different kinds of cities, with different horizontal and vertical scales and densities, and within each of those cities are lots of different kinds of conditions. But in cities like New York, the number of people keen to be there means that nearly every square foot is programmed, usually with something expensive enough to deliver a growing return on investment to the owner. Further, what is there is invariably set in concrete, either literally, or, in the case of property rights, metaphorically. This means that urban change is difficult. Since there is no room to add onto the existing systems or structures, the task is one of 'unbuilding cities' (to use the nice title of a book), which is very difficult. On the other hand, in a big city, there are often spaces that are neglected, either because the material is crumbling, or because they are between legal systems. These are often where motivated individuals site their experiments to change the city. This is the whole tradition of urban community gardens in New York City—that is where the Amplify Project began its research in the Lower East Side in 2010. In northwest Brooklyn, the waterways afford these kind of transition spaces: one story told in the Amplify exhibition is of an innovative photovoltaic system installer which operates from a series of boats set up as a co-working space by the marina owner interested in fostering the creative class.

Amplify presents "On the Waterfront"

Cities are lively because they are chaotic. But to be viable, they must also be regulated. This history of urban disasters is written into the bylaws of developed cities: building codes reflect rapidly spreading fires in contiguous housing; hedgehogs are illegal as pets in New York City because they (used to) carry contagious diseases; the legal framework for privately owned public spaces are created because the city cannot afford to buy back land for public programming; etc. Because cities are large and rapidly changing, these regulations are debilitatingly complex: they are developed by departments who rarely seem to have time to coordinate (hence the Bloomberg Administration's attempt to create the horizontal Office of Long Term Planning and Sustainability); and there are so many regulations that historical anomalies persist for a long time before they are corrected.

Social innovation can be stifled, not by regulation per se, but by the tangle of regulations that attend to big cities. On the other hand, that same tangle creates grey zones and areas of activity that tend to be difficult to police. Amplify's work in the Lower East Side explored some of the shared food preparation that takes place in private kitchens that may or may not need health department certification. In northwest Brooklyn, the creator of a restaurant compostables collection bike service had to cast the actual composting facility as an artwork, as otherwise it would have seemed like a private benefit was flowing from a public park.

You've got to network / The city conceals people from each other

The sociological history of the city is the history of people learning to ignore each other when on a crowded street or subway, breaking the millennial habits of living in small communities where you should greet everyone you see. Nevertheless, cities comprise neighborhoods; and dense pedestrian neighborhoods mean that you invariably run into the same people repeatedly. New York City is in fact a collection of social villages, something betrayed by real estate branders with their Tribeca's and Dumbo's.

Social innovation always involves networking. It involves building coalitions to support change. But it also involves extensive social research to discover what differing sectors of the community, who will be affected by that change, want or fear; not in order to tailor your message, but in order to modify what it is that you are working toward.

Nevertheless, despite the need for networking, and the villageness of places like the Lower East Side and Williamsburg, the city reaffirms its scale when you realize how many social innovators know nothing of others like them right next door. This is why there are so many social innovation mapping projects at the moment (changebyus just released changenear.me). The Amplify project has partnered both years with Greenmap Systems, and in nearly all cases social innovators participated in the Amplify project to find out about related innovations.

On the other hand, the drive for social innovations often comes from people who self-identify as heroes fighting confusingly regulated urban density. These people often need to feel a sense of ownership over their project. And so they struggle for uniqueness, either explicitly defining themselves in contrast to related projects, or in some cases, refusing to search for related projects, in case what appears to be theirs is lost.

It's all about inclusion/ There is no excluding exclusion

The natural drift of cities follows capital accumulation. This results in an increasingly homogenous consumer city accessible by only the wealthy. Social innovation is often motivated by attempts to resist this kind of business-as-usual development to preserve the cosmopolitan nature of cities. This puts design in a tricky position: can the methods normally deployed by gentrifying forces be used to create more diverse futures?

Social innovation is committed in principle to being as inclusive as possible. And this is also strategic, as the previous point indicated. But social innovation pioneers often learn the hard way that the much-touted 'win-win' is a political mirage. For nearly every possible urban future, there will be losers, whether it is the people who park their cars on the streets that others want to close for the summer, or the migrant family making its money selling unhealthy fast food that the local kids are educated not to buy after-school.

In the past two years, Amplifying Creative Communities, has focused on what it calls "urban activism," initiatives in which groups of people commit to a particular vision for the future of the city on behalf of certain under-resourced constituencies. In northwest Brooklyn, livable street activists guerilla paint bike lanes onto contested streets in a largely Hasidic neighborhood at night, while by day, they build bridges between the Hasidic community and the hipster cycling community.

In sum, it takes a surprising amount of energy to try to redirect city-life. The scale and speed of cities allows for individuals and communities to innovate, but it requires a sustained tolerance of paradoxical forces to get those innovations to withstand the existing flow of cities towards less equitable and less sustainable futures.