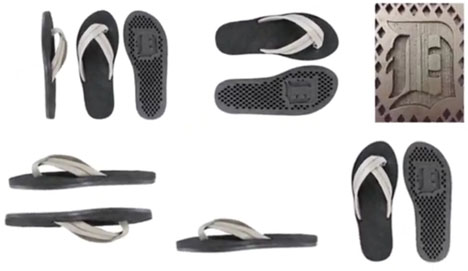 An Integrated Product Design class at the University of Michigan—a class that combines design, engineering, and business—has turned their attention towards CCSS's project and is attempting to take the business further, by using their rubber cast-offs to make sandals, with straps made from seatbelts harvested from junkyards (see also: E13's repurposed airbag). To that end, they've formed Treads Motor City Sandals to pursue the idea in earnest.

"For a lot of these students, this is the first time they've ever made anything physical and real," [said professor Bill Lovejoy]. "They have these grandiose plans in the brainstorming phase but after the first week in the shop they realize they need to scale back significantly. They develop a respect for craft and the people that actually make things."

Despite some setbacks, the students are making progress, as you can read about in the full story on Spero News. The basic idea is encapsulated in the brief video below, which was designed by the class as a commercial: