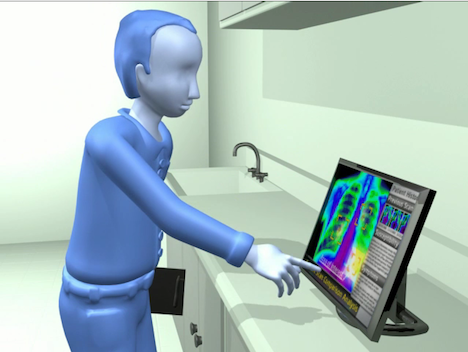 In our third installment of this year's Interaction12 IxDA Conference preview, Kate Ertmann, Partner at ADi, gives a preview of her upcoming presentation on Ethnographic Animation by sharing some of the foundational ideas and processes behind using animation as a tool for business and design.

In the world of ethnography, ethnographers are aiming to describe the nature of their subjects. And in the world of ethnography, as it is related to product development, the study is usually around people who are encountering a challenge of some sort in their everyday life that may be resolved by a new product. So ethnographers go out in the field, research humans in their natural environment—which may very well be their living room, kitchen or observing them while they shop in a store—and gather the data of people's behavior, challenges or processes in particular situations. How do you clean under that couch? How do you hold that spoon that you usually use for eating your cereal if you want to, on other occasions, mix some cake batter with it? When that bucket becomes heavy, how do you pick it up to get it from point A to point B?

In the past, capturing live video has been a way to capture this data. Yet when you show that video to other people, be it an engineer, a developer, a peer at a partner agency or even a focus group, you run into the challenge that the viewer naturally starts observing the extraneous items in the 'scene.' The viewer may think, "That doesn't look like my family's living room," "But my grandmother is younger than that grandmother," or the viewer may tune out immediately because the video you show is from a study in a typical household in Taipei, and you live in South Dakota. It's interesting what observations we unconsciously make when we deem something unrelated to our world.

So, once that information is gathered, what do you do with that data? You might create a spreadsheet and try to find common points across the data. Or, maybe you took pictures documenting the study's actions and you make a visual to share with your colleagues in the ideation stage of the process.

That's great—and all of those things can take you into the visualization stage where your development team may brainstorm and make sense of the information that you have gathered...and then what? Do you start sketching? Sketching what? The tools that the subjects were touching, using, playing with? 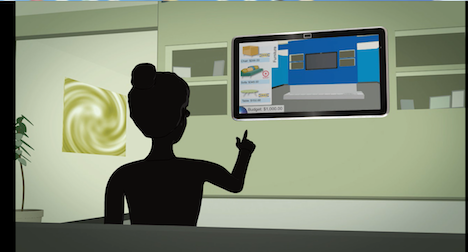 Or do you go to the virtual prototype stage, where your focus is—now—on the product itself, and you've now, essentially, put your human behavior studies into purgatory till you think to unearth them later in some group discussion months down the road.Through the process of ethnographic animation you can recreate the world you observed in your initial studies. John Lasseter, award-winning director behind Toy Story and Cars, and Chief Creative Officer at Pixar and Walt Disney Animation studios, recently had a conversation with Charlie Rose where Rose asks about the future of animation. Lasseter responds with thoughts on the more recent changes in computer technology: John Lasseter: So, where we're going in the future really depends on the ideas that our directors come up with.

John Lasseter (interrupts): It's making it more believable. I like to use the word believable because I never want to produce a world that people think really exist. I like to take a step back and use those photo-realistic tools and our ability to make it look real - take a step back, produce a world that the audience knows does not exist and then make it look as believable as possible so the audience goes 'I know that's not real, but boy, it sure looks real.'

Lasseter's believable world is just one of the things that makes ethnographic animation such a great tool for the business of product design and development: you can create a believable world, but that doesn't need to also mean you are trying to make something real. An audience can relate to what is going on and have even a visceral reaction without the expectation that their experience is real.

An Ethnographic Animation is a representation of how things exist now. 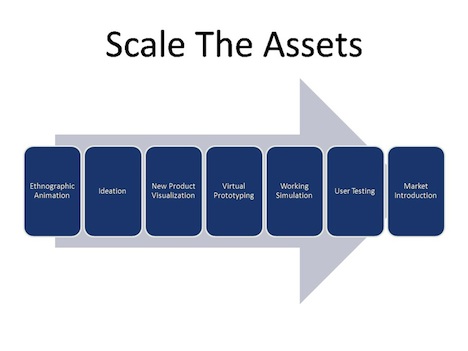 By tweaking both the future product and the consumer's experience within the animation itself in parallel, the product development team can be on the same page throughout the entire process. Having all of this simultaneously represented through a visual can even bring up challenges to be solved earlier in the development process.

One of the greatest things about working in 3D is that you can employ real-world physics. Need to show your subject picking something up and carrying it across the room? You can show the impact of how heavy that object is for a person who is 5"3'. Revealed in the animation will be how your 5"3' subject then, needs to carry it, where they grip a handle (even the size of that person's hand) and the impact of that on their body.

The below are some ways we've used Ethnographic Animation in Product Development:

Ideation: After you create the initial ethnographic animation, use that same animation to ideate and visualize what this new product might look like, and how it might be used. You've now seen what the problem is in the environment that you want to solve, presumably with a new product or feature or UI, so start playing with size and weight and how that effects a human's behavior in an environment. In 3D, it's easy to create a box or ball or any geometric shape, and play with the weight and dimensions. Partners in this process can pass the small sized animation movie file back and forth and observe and comment.

New Product Visualization: The real-world environment—the human characters, environments, objects—that you have already created for the initial EA and may have further developed in the ideation phase, can now employ the economies of scale. You can use the animation itself as your prototype by now introducing existing assets to be used in visual use cases. Create situations and scenarios that may represent a cause/effect: If your subject carries a square box that weighs about 10lbs up a flight of stairs, what's the best way to hold it—where should you put a handle? Test this in the real world, recreate it in the animated world with the real-world physics, and share this visual with your development partners. So much more impactful than a data sheet.

Virtual Prototyping: As you've now gotten a better idea of the situations the product may be used in, you can start tweaking the product itself in the virtual world, perhaps take a step back from inserting it into the scenario, and really spend time getting a three dimensional feeling of what this could look like. Play with textures and colors. Find a new material in the real world and virtually use it in your EA. Explore form factors, User Interfaces and different feature sets without having to manufacture anything. The cost of tweaking this prototype mitigates the real world tweaking, and time sink, in creating rounds of rapid prototypes.

Working Simulation: You probably have two or three prototypes you want to test and 'take back to' your scenario world. Test it, tweak it, test it again. This is essentially the closest to a simulated experience that you'll have, and you can run through many cause / effect scenarios in just a week's time.

User Testing: Take the EA out into the public. Put it in a focus group, conduct market research with it, get a sense of the true usability of what you have been working on. At this point you might also want to pay attention to what your character(s) look like—are they believable to the non-developer as a consumer? We've found there is great value in stylizing the characters to be identifiable as simply human beings, but not to focus on culturally significant details, or to even give them detailed facial features. It's the action of what the characters are doing that you want your audience to focus on, and any opportunity to have the audience not be distracted by a human feature gives more opportunity to focus on the experience they are witnessing.

Market Introduction: Why not use the EA into your marketing process? The EA has been the constant representation of the product thus far, and the 3D software used thus far is the same software used for animated feature films as well as special effects in the movies. The POV 'camera' can be moved around in the environments you've already created months ago to show more exciting angles of the product for a potential buyer. Focus in on the features that the sales force needs to know. Show the internal workings of the product—how to assemble the pieces of it. Show the interactive choices in the UI and how big the onscreen buttons are to the human hand.

The economies of scale are fantastic in this process. Since the animation is being passed through the entire continuum of the product cycle, we haven't had to go back to the drawing board and re-create assets from scratch (as you might with virtual prototyping).

The cost savings becomes apparent in a faster time-to-market; you save dollars not just in this fluidity of the overall process, but also in getting that product out in the market 2, 3, maybe 6 months ahead of your initial predictions since you are focused on both the product and the related human behaviors at the same time.