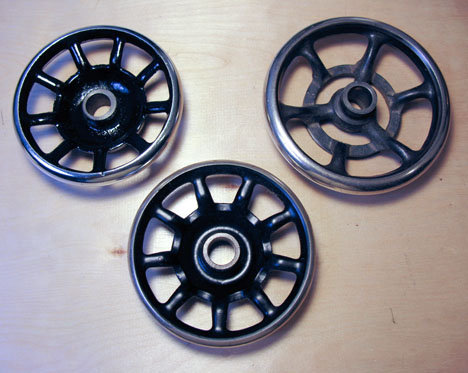 Capitalism says that competition will yield the best results for consumers. I like that concept and can get behind it, even at the expense of my own country, the U.S., since playing that game well is what made the U.S. successful to begin with. If a developing nation like China can manufacture goods superior to American goods at a cheaper price, the market should reward them. What bothers me is when an organization can succeed by making shoddy goods at a cheaper price and still be rewarded.

All three are made from cast iron and intended to be heavy, as they serve a flywheel purpose and need to be weighty enough to store momentum. All three are made the same way: They're sand cast in a foundry, and a hole is subsequently machined into the center, as the wheels are intended to fit onto a spindle on the rear of a sewing machine. 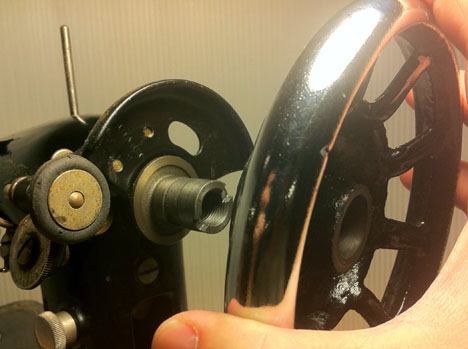 A thin, leather (or these days, rubber) belt is then placed into a groove on the inner surface of the handwheel. The belt is driven by a foot-powered treadle and the handwheel rotates, driving the shaft. 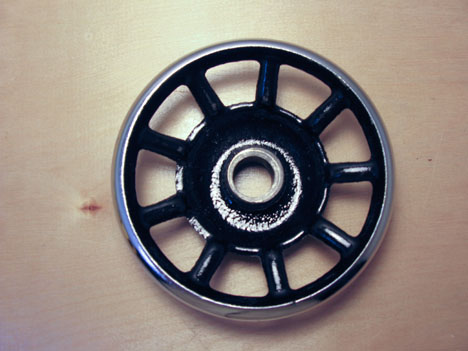 The edges are sharp, including the parts meant to interface with human fingers, and the paint is badly bubbled, with a sandy quality. 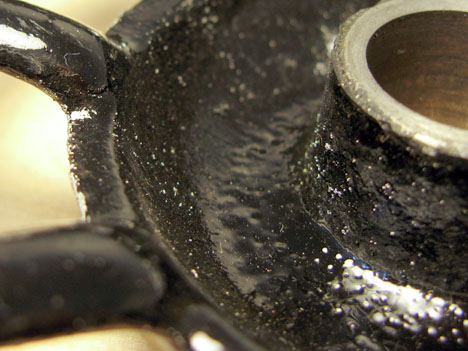 More importantly, the hole has been bored well off-center. 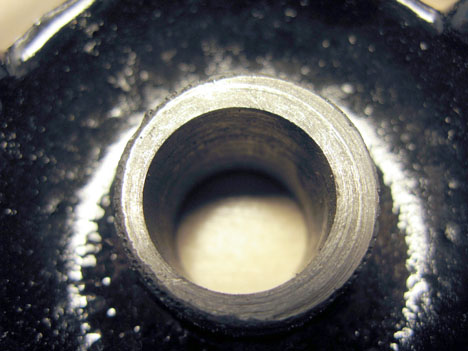 This means that when you place the handwheel on the spindle, it spins with a wobble. At each rotation, then, the stress placed on the leather belt increases and decreases accordingly, leading to uneven wear.

In contrast, the American-made Simanco (Singer Manufacturing Company) wheels from the early 1900s are smooth-surfaced, with rounded edges on the spokes and smooth, even paint jobs that, though slightly dulled by time, have lasted a century. And crucially, the hole has been bored dead-center. 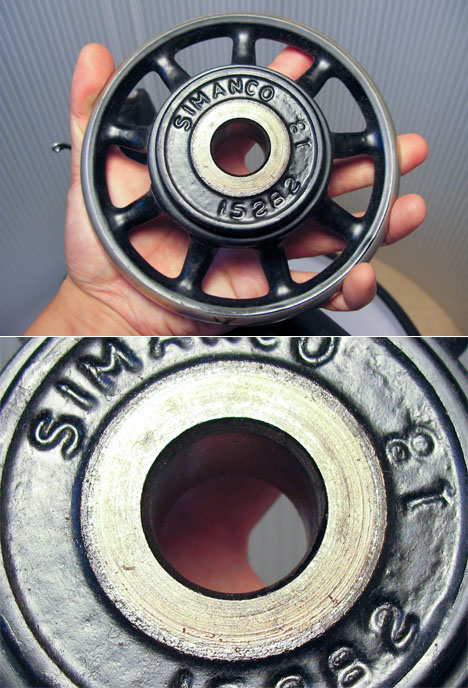 When either of the Simanco handwheels rotate on the spindle, there's no observable wobble or eccentricity in their rotation. From a functional standpoint they are perfect.

It seems ludicrous to me that a company using machines designed 100 years ago could manufacture something of superior quality to a 21st-Century factory, but that's the reality for this particular product. The Chinese factory that makes these has no competition and no incentive to get it right; there is no American manufacturer who can produce these handwheels, whether flawed or perfect, and turn a profit.

My initial knee-jerk reaction is to avoid Chinese-made goods altogether, drawing the simplistic conclusion that Chinese factories are just no good. As we'll see in the next two parts of this series, the full story is a bit more complicated.