Wondered about the history of the Levi's 501? Where did the idea for the Barcelona chair come from? New York City's School of Visual Arts MFA program is presenting its first documentary film festival on Saturday, March 24th. In addition to screening a group of three short docs from the Objects of Desire BBC series and Selling the Sixties: How Madison Avenue Dreamed the Decade, the Film Festival will host the New York City premiere of The Book: the Last Chapter?, a documentary about the fate of the book in the age of the iPad and the Kindle.

Curated by Steven Heller, co-chair of the MFA Design Department at SVA, the festival will also include conversations with Alan Yentob, filmmaker and creative director of the BBC, and legendary advertising creative George Lois.

Full-day pass is $15 and you can pick one up here! 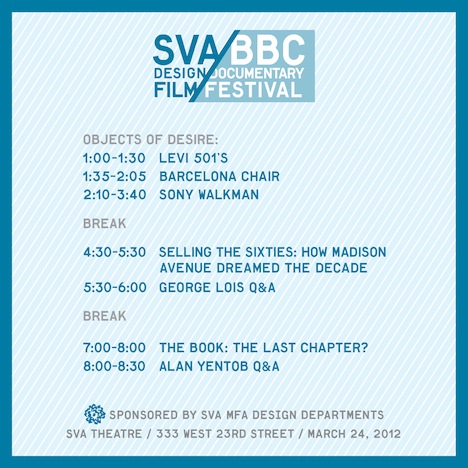