As ever, 3D printing is at the threshold of cultural consciousness, almost-but-not-quite the next major innovation in consumer technology. While hardware remains a bit too niche for the average user, plenty of brilliant DIYers and hackers have been developing new tools and applications for 3D printing technology, typically with the goal of making bigger, more colorful tchotchkes. 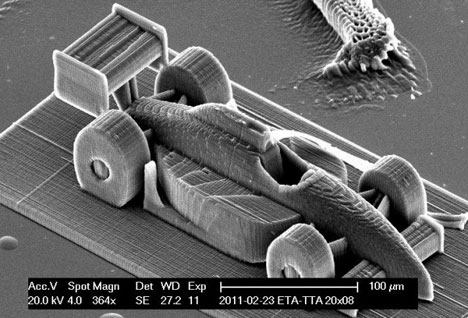 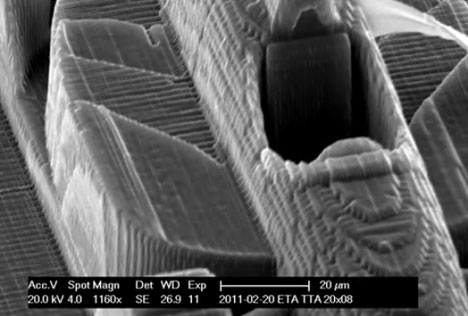 A team at the Vienna University of Technology is taking the Wayne Szalinski approach, not in terms of scaling-down the hardware but the actual output, fine-tuning the motion of the lasers and mirrors for a process called 'Two-Photon Lithography.' The technical details escape me, but their breakthrough involves an innovation that is more about a 100,000-fold (!) improvement in speed as opposed to nanometric scale: their 3D printer can produce "100 layers, consisting of approximately 200 single lines each, in four minutes."The 3D printer uses a liquid resin, which is hardened at precisely the correct spots by a focused laser beam. The focal point of the laser beam is guided through the resin by movable mirrors and leaves behind a polymerized line of solid polymer, just a few hundred nanometers wide. This high resolution enables the creation of intricately structured sculptures as tiny as a grain of sand. "Until now, this technique used to be quite slow", says Professor Jürgen Stampfl from the Institute of Materials Science and Technology at the TU Vienna. "The printing speed used to be measured in millimeters per second—our device can do five meters in one second." In two-photon lithography, this is a world record.

This amazing progress was made possible by combining several new ideas. "It was crucial to improve the control mechanism of the mirrors", says Jan Torgersen (TU Vienna). The mirrors are continuously in motion during the printing process. The acceleration and deceleration-periods have to be tuned very precisely to achieve high-resolution results at a record-breaking speed.

In his presentation of "David (Inspired by Michelangelo)," contemporary conceptual artist Serkan Özkaya mentioned that he was fascinated by 3D printing as a new process for fabricating sculptures, presenting the object that happened to be in his hand as an example: a 3D scanner can create a rendering of the pencil, which serves as a template for 3D printing. The result is a non-functional replica, in which scale might be a creative decision as opposed to a practical one (his double-size sculpture, of course, was made by hand).

The TU Vienna team, on the other hand, is excited about the real-world potential of 3D printing on various scales:Because of the dramatically increased speed, much larger objects can now be created in a given period of time. This makes two-photon-lithography an interesting technique for industry. At the TU Vienna, scientists are now developing bio-compatible resins for medical applications. They can be used to create scaffolds to which living cells can attach themselves facilitating the systematic creation of biological tissues. The 3d printer could also be used to create tailor made construction parts for biomedical technology or nanotechnology. 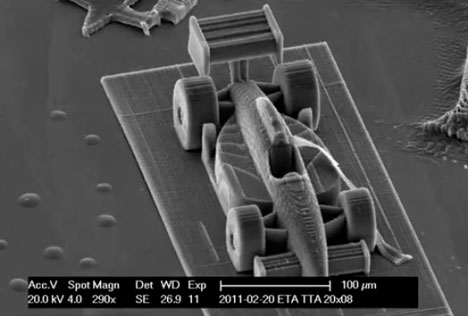 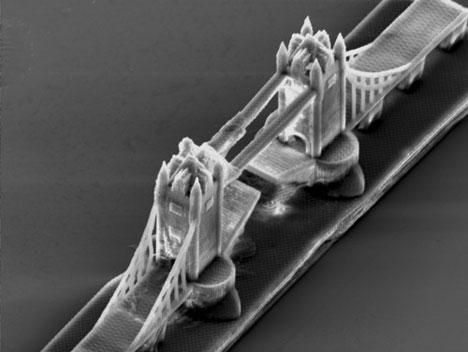 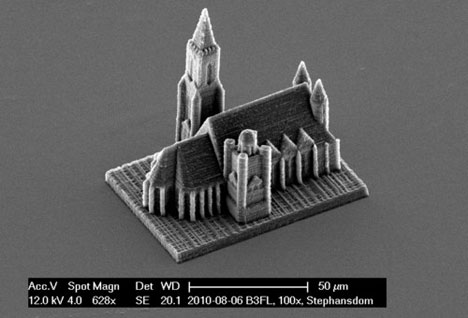