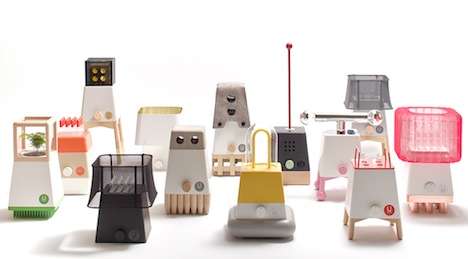 We were delighted to see Core77 friend François Chambard of UM Project at the opening of WantedDesign 2012, but were even more delighted to see the debut of his Craft System collection. In our NY Design Week studio visit previews, we got a line on the new collection at UM Project HQ in Brooklyn when Chambard mentioned that he'd be debuting a piece at ICFF with three market-ready variations. For Wanted he planned to "take this same piece and doing a series of totally unexpected, whimsical, playful and serious versions." 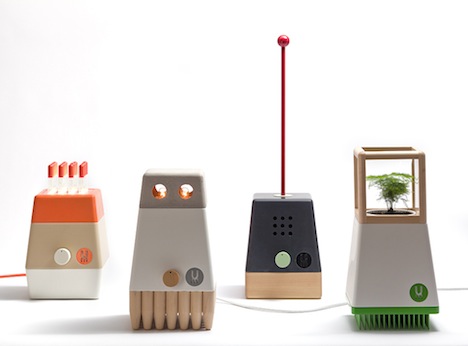 The Craft System, "takes a system approach to craft, blurring the line between the mass-produced and the handmade." A single Corian base serves as a foundation for an LED Grid or small incandescent light bulbs—an oversized dial on the face of the base invites users to "dial-in" to the fun and interact with the light. Varying tops and bottoms combine to create an infinite number of playful lighting options. 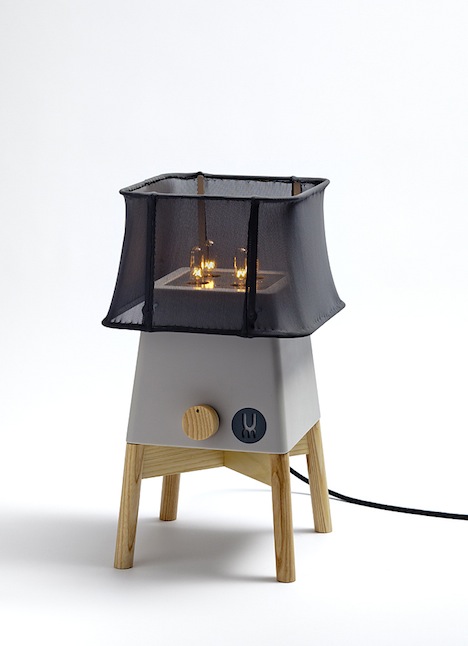 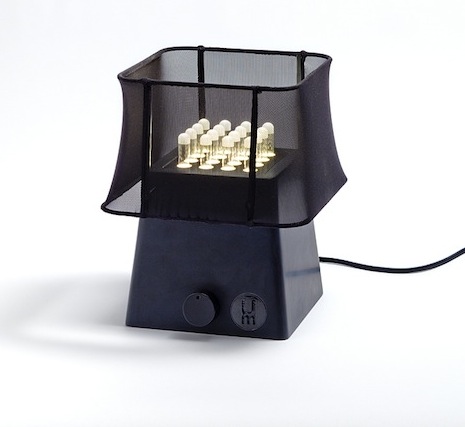 We love Chambard's approach to the market—the Craft System highlights the strengths of an independent designer that can turn their limited and specialized production capabilities, "into an advantage by enabling the manufacturing of market-ready series and one-off pieces at the same time." This philosophy of "serious play" opened the door to the wonderfully whimsical Theremin, Greenhouse and robot shapes.

Core77 had an opportunity to chat with François about his unique project to get some insight into Sci-Fi inspirations, the development of his "silver bullet" base and his plan to add a new piece to the Craft System each month.

Core77: Where did the inspiration come from for the Craft System Project?

François Chambard: As a member of the New York design community, it is important to show some work during Design Week. But somehow I have always struggled with the dual format ICFF vs. off-site shows. One is too corporate and business-driven. The other ones are too artsy. I am neither a business person nor an artist, but I am somewhere in the middle, immersed in the marketplace with a point-of-view and a story to share. I was looking for a format to show what UM Project does—a combination of unique, one-of-a-kind projects and production work sold at retail—in a novel and engaging way. Like so much of our other work, mixing cues from industry and craft was the obvious answer and Craft System does it quite literally. A central part speaks the language of industry: standardized, repeated, manufactured. Attachments speak the language of craft: unique, unexpected, handmade. The formula was established, providing the key to multiple variations. Hence the name, Craft System.

This year provided a unique opportunity to show new work in a different way during New York Design Week. We knew that Wanted Design would make a great comeback for its second year. Very early, we decided to use it to our advantage by sharing a story and a process at Wanted Design, while still being visible at ICFF, showcasing products for the trade. Craft System was our message. Wanted Design provided us the medium and it has worked just wonderfully.

From a formal point-of-view, inspirations for Craft System comes from the imaginary and the real worlds with designs inspired by comics and appliances, toys and tools, sci-fi movies and science labs. Design-wise, Craft System mixes multiple influences including Memphis through the stacking of simple geometric shapes, and mid-century modern design, especially Jean Prouvé, through the mix of the tech-y and the beautifully functional. What considerations did you make when deciding on the base form?

The base form is a building block, so it was clear that it needed to be compact and monolithic. A cube was a little too expected and limiting too. A few shapes were considered but it became clear that a tapered form was the answer. Some kind of "silver bullet" as a matter of fact. The shape is timeless and universal and can be found almost anywhere in small and large structures. It offers quasi-endless possibilities in the way it can be scaled, stacked, augmented, etc. The shape also offers great production potentials. The pieces presented during Design Week are made of Corian, which will still be used. But other materials are also considered, especially porcelain, working with resources in Limoges, France. Considering that, what's easier to cast than a shape with tapered walls? 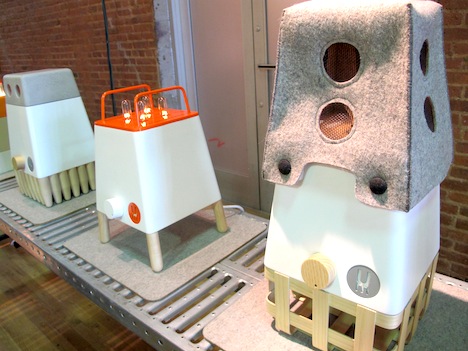 Was your intention to make the whole family of lights?

In some ways, Craft System is a manifesto, demonstrating how small independent companies like UM Project can be active players in the industry while keeping creative and visionary with unique creations. But the work has to be engaging and accessible first. If people engage and want to know more, then they can peel the layers of the onion and learn more about it. Most of our work is playful and serious and it was important to keep it that way. Lighting offers great potentials because of its scale, its function but also the level of interactivity.

It seems a little silly but most lighting has a switch or a button and that is a big part of the experience. Last year, we launched the L.U.M. light and it has been a success partly because of the oversized dimmer switch. One of the first thing users do is play with that switch, as if it provides some kind of physical and emotional connection. So the same type of switch was used on this year's pieces, adding a little more personality and friendliness to the pieces and providing an easy way to interact. And that is exactly how it worked during the show. People played non-stop with the switches like children. They were really hands-on with the pieces. So much that they even broke a switch.

Will you continue the handmade Craft lights to order?

Craft System was an instant success and some units have sold already. Our intent is to expand the collection by adding one unique piece every month. We are also looking at ways to expand the Craft System concept with other forms and other objects. In fact once the recipe is set, it can be tweaked with other ingredients. UM Project stands for Users and Makers—we have always try to make basic pieces that reinforces the connection between users and makers. Craft Systems might be part of the answer, by providing a system of endless variations that speaks a rich making vocabulary and suggests multiple uses. 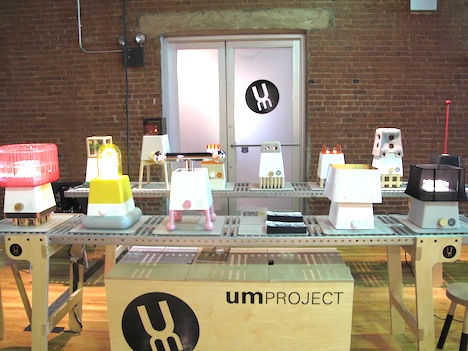