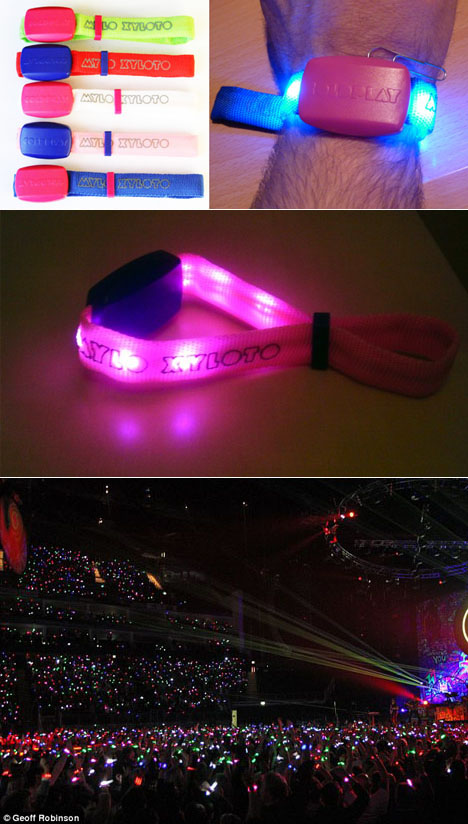 The days of thousands of concertgoers all holding lit cigarette lighters aloft are long gone. In those days, the worst thing that could happen to you is you'd accidentally burn your thumb after letting that metal heat up for the entire duration of "Stairway to Heaven." But yesterday morning a British newspaper reported, in an alarmist tone, that there are problems with the lighter's modern-day successors.

Coldplay has recently been using Xylobands, LED-illuminated wristbands that can be controlled, en masse, via radio signal. Xylobands are doled out to concertgoers pre-show, turning the crowd into a gigantic and visually-controllable display. Here's what it looks like in action:

Post-concert, fans can choose to recycle the Xylobands on-site or take them home as souvenirs. The latter group is the subject of the amusingly shrill Telegraph article, which breathlessly reports that "LED wristbands given out at Coldplay gigs have been alarming fans by continuing to glow for several days after the concert has ended."

...Fans have reported that the bands, which have been given out for free to more than a million fans, have started flashing again of their own accord several days after the event.

...One concert-goer called Denise wrote: "My Xyloband woke me up in the middle of the night and it's still glowing."

Another added: "Really weird, my dad's white Xyloband just started flashing again." A Belgian fan added: "Mine is alive! It started flickering about an hour ago."

The article goes on to quote a guy from the company who produces Xylobands as saying "There's no mind control or tracking, they are just for fun." Thanks for clearing that up.

The Xyloband website, by the way, has an ingenious method you can use to get the lights to stop flashing: "Remove the batteries.