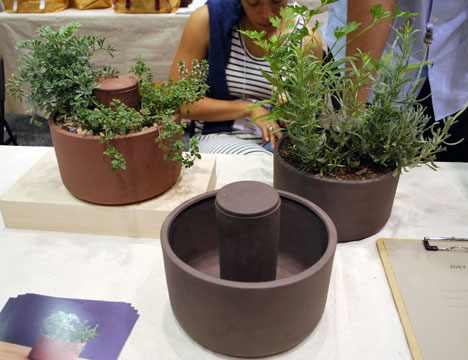 Modern life "outdoors" is a surprisingly dominant focus at Dwell on Design, from the entire "Dwell Outdoor" section to "Design Materials" focused on outdoor to a not-insignificant amount of adaptable in/out and outdoor furniture and accessories. So it's no surprise that designer Joey Roth chose to debut his newest creation there: a terracotta self-watering planter, which he showed as part of the Remodelista Market. Roth has explored making the perfect pot of tea with his Sorapot; he created beautiful ceramic vessels for sound with his porcelain speakers; and now he ventures into the outdoors with the planter.

The new design provides an elegant solution to the timeless problem of providing plants with the appropriate amount of water. Each of the two compartments is made entirely from terracotta, such that the pot is essentially a straight-walled bowl with an enclosed tubular chamber in its center. Plants and dirt go in the outer ring, water goes in the center; over time, as the plant's soil and roots need it, water naturally seeps from one chamber to the next, through the terracotta. It's a clever use of the amazing properties inherent in both the terracotta and plants' root systems. 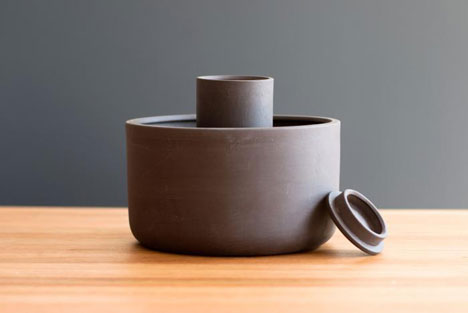 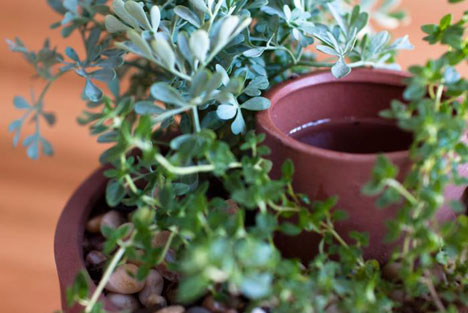 Of course, these properties have been celebrated for years with the ancient tradition of Ollas, which inspired Roth's planter. The Olla has been used in the Southwest for years to easily and effectively irrigate plants. An Olla is buried next to a plant, and filled with water it naturally irrigates the plant over time. Roth was inspired by this, as well as moving to a home with a garden in California for the first time.

Roth said that he has done some tests in earthenware, which he likes for its dark-brown tone. But, he's not yet convinced that it has the same effectiveness in watering as the terracotta, and continues to test it. He said he is also refining the design to elevate the water chamber up from the planter's base more, so that water won't seep out from the bottom, but hopes to have the first round of production available by August.