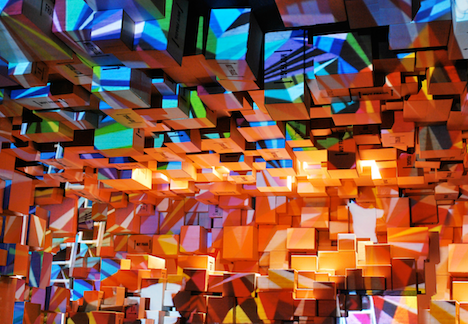 No, it's not an unseen CG image from Inception, though it's certainly cool enough to be. These are pictures of BoomBox, an installation made entirely out of cardboard boxes by French architect, Stephane Malka. Created for the 2011 EME3 International Architecture Festival in Barcelona, Boombox somehow escaped everyone's notice, including ours, until now. We think that's a real shame because it's rare to see such an immersive, experiential installation made from such simple materials. By simply projecting various lighting configurations onto a wall of cardboard boxes, Malka completely transforms an everyday object into a powerful environment. 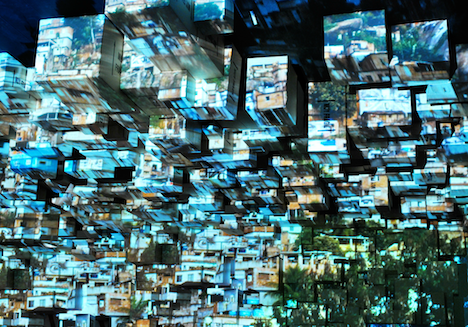 The concept for BoomBox stems from Malka's belief in democratizing architecture. He calls it his "eulogy to cardboard, a cheap material symbolizing nomadism [in] contrast to stone, a noble material representing longevity in all its static weight. Although separate entities, there is nevertheless an exchange between two bodies, a cultural and social fusion between the academic and contemporary, at the crossroads between a work of art and a work of architecture." 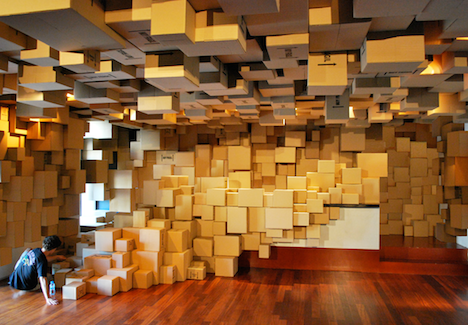 Unlike a marble monument, BoomBox is immediately accessible and, I'll venture, entertaining. Malka projects a light show of color patterns and images that make it more than just a wall in the background of an arts exhibition, but a focal point all on its own. He likens the sequence of projections to graffiti, with the cardboard acting as a blank wall for the artist to make their mark on. Malka's other projects take a similar approach of bridging high concept with low materials. Ame-Lot, which he installed in Paris last year, uses discarded wooden pallets for a student housing project with a geometrical aesthetic that echoes BoomBox's formal qualities. Check out Malka's other projects and see what simple materials are capable of.

[Thanks for the tip, Burnlab]