Window to the World

This concept re-defines the relationship between passengers in a vehicle and the world around it by transforming the vehicle's windows into an interactive interface. The concepts generated in this project aimed to re-define human-nature relationship in the context of near future mobility, expose Europeans to Japanese values and culture and use this experience to trigger emotions.

How did you learn that you had been recognized by the jury? The project team discovered that we had won the Speculative Design category by watching the online stream on the Core77 website. CIID is very international and we were scattered across various computers and countries. The Toyota team were in Brussels and Japan. One CIID team member was in Spain, two were in Italy, and the rest of us were gathered around a computer in the CIID Consulting office in Copenhagen. We were continuously refreshing the twitter stream and our eyes were glued to Bruce Sterling as he announced the results. When we heard the words "Window To The World", our screams travelled throughout the building!! Our colleagues could hear us two floors above - so they knew without asking that we had won!

What's the latest news or development with your project? Since developing Window To The World, CIID Consulting has continued to have a successful on-going collaboration with Toyota. The vision of Window To The World has proven to captivate many audiences both on and offline. The video has had well over a million views, it has been featured on CNN, and published in many newspapers including The Independent (UK) and The Chicago Tribune. A working prototype of the Window To The World interface is now exhibited in the Toyota Flagship store on the Champs Elysee in Paris. Winning a Core77 design award is a great honor to add to these achievements and we look forward to further successful collaborations between CIID and Toyota in the coming months.

What is one quick anecdote about your project? The original storyboard for the Window To The World video was set in beautiful countryside, with rolling hills and the sun shining in the background. However, we soon realised we were in Denmark (one of the flattest countries on the planet), it was winter, there was no sun and only a few hours of light a day! Not to be put off by such trivial matters, we went ahead as planned, fueled with enthusiasm - just with a lot of scarves on!

What was an "a-ha" moment from this project? The 'a ha' moment for this project was when we built the first working prototype of the Window To The World interface using rear projection, IR technology and some code. The physical prototype itself was by no means beautiful but the experience it promoted was. By using these quick prototyping methods we were instantly able to test the idea with people in order for us to get feedback and refine the overall vision. It was an amazing experience to see people engaging with the idea and enjoying the interaction - and it was interesting for us to understand the different behaviours it promoted. What was initially a simple sketch and paper scenario of an idea, was brought to life in the real world where people could experience it for themselves. 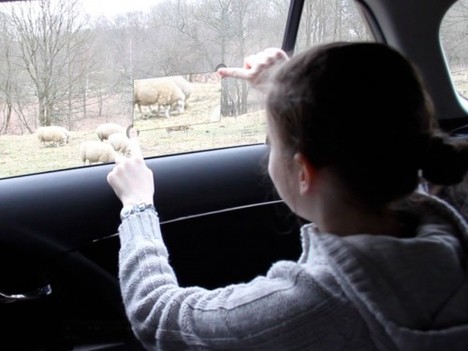